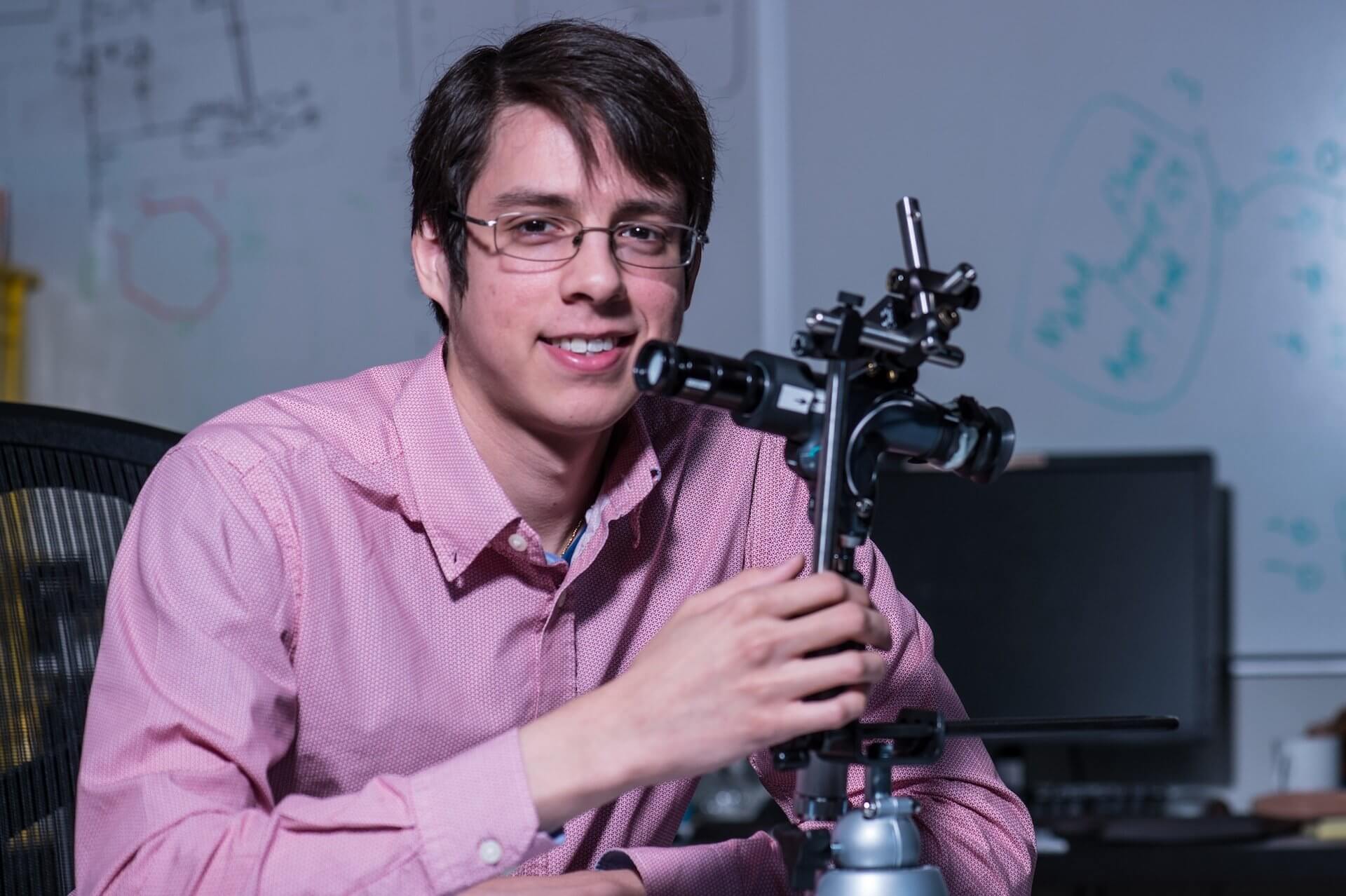 A smart and simple method developed at Rice University to image a patient’s eye could help monitor eye health and spot signs of macular degeneration and diabetic retinopathy, especially in developing nations.

The patient-operated, portable device invented at Rice is called mobileVision. It can be paired with a smartphone to give clinicians finely detailed images of the macula, the spot in the center of the eye where vision is sharpest, without artificially dilating the pupil. Those images are then sent by cellphone to ophthalmologists who can make their diagnoses from afar.

The device was built as part of Rice’s Scalable Health Initiative, an effort to create portable, robust and inexpensive diagnostic tools for use around the world, particularly in low-resource areas.

The Rice team includes Adam Samaniego, a Rice alumnus and research engineer; graduate student Vivek Boominathan; Ashutosh Sabharwal, a professor of electrical and computer engineering; and Ashok Veeraraghavan, an assistant professor of electrical and computer engineering. They presented the first comprehensive results of their work at the Wireless Health 2014 conference on Bethesda, Md., last October.

The eye is the body’s only portal that allows direct, noninvasive imaging of internal tissue like blood vessels, according to the researchers. A number of labs are taking advantage of cellphones’ increasingly sophisticated cameras to put diagnostic tools in the field, and the Rice researchers believe they are leading the charge with a device patients can use on their own with minimal instruction.

Generally, doctors have to dilate a patient’s eyes – an uncomfortable, time-consuming process – before an exam that often involves bulky, expensive equipment. The challenge for Rice engineers, Veeraraghavan said, was to produce a portable device that provides high-quality images of the macula without dilation.

“Whatever you look directly at you see in very high resolution, while your peripheral vision is blurry,” he said. “The region of the retina that provides you with this high resolution is the macula. And degradation of the macula immediately affects your eyesight.”

“When we talk to physicians about this project, the first question they always ask is, ‘Can you image the macula?'” Samaniego said. “So that’s where we decided to focus our efforts.”

The result of three years of research and prototyping is a device that looks and works something like a reverse microscope. A patient looks into the eyepiece and sees a large dark red disk. When the system is shifted around freely, the appearance of the disk changes dramatically – appearing brightest and most uniform when perfectly aligned with the patient’s eye. When this happens, the patient hits a button that moves the target out of the way and allows the camera to see into the eye, with help from a battery-powered light source.

“That dark target induces pupil dilation naturally,” Samaniego said. “When you present the eye with a stimulus that isn’t throwing a lot of photons at it, the eye dilates to collect more light and have a better look.” When the patient can clearly see the disk, the pupil is dilated and the system is aligned, he said.

Once the retina is illuminated, Samaniego said, “We have a window of only a few hundred milliseconds to snap as many frames as we can before the pupil constricts again.”

At that point, the patient’s job is done. In an ideal situation, Samaniego said, a mobile clinic anywhere in the world could use multiple mobileVision systems to gather data from many patients very quickly. “There might be one individual who’s telling a number of people how to do different tests with different devices,” he said.

In their Rice lab, mobileVision is connected to a small camera and tied to a computer. But in the field, a cellphone would capture video and break it down into a series of still images that can be analyzed and enhanced through a computational technique known as “lucky imaging.”

“This technique was invented for astronomers who image stars from Earth and have to correct for the effects of atmospheric turbulence that cause a loss in resolution,” Veeraraghavan said.

“The naïve thing to do is take hundreds of images and use the best one. You would feel lucky if you found something that looked good,” he said. Instead, the Rice algorithm takes a sampling of the many images captured before the pupil closes and fuses them to enhance the features.

While they refine their device, the Rice team has also been participating in a National Science Foundation program called Innovation Corps (or I-Corps) that helps researchers prepare their basic research for use beyond the lab.

“As part of the program, we’re being taught the rigorous, intellectual tools we need to move the project out of the lab and into the world,” Samaniego said.