Medicine on a Mission

Fresh off a trip to rural Guatemala, UTHealth faculty and students share their experiences treating patients who have little to no access to health care

Medicine on a Mission 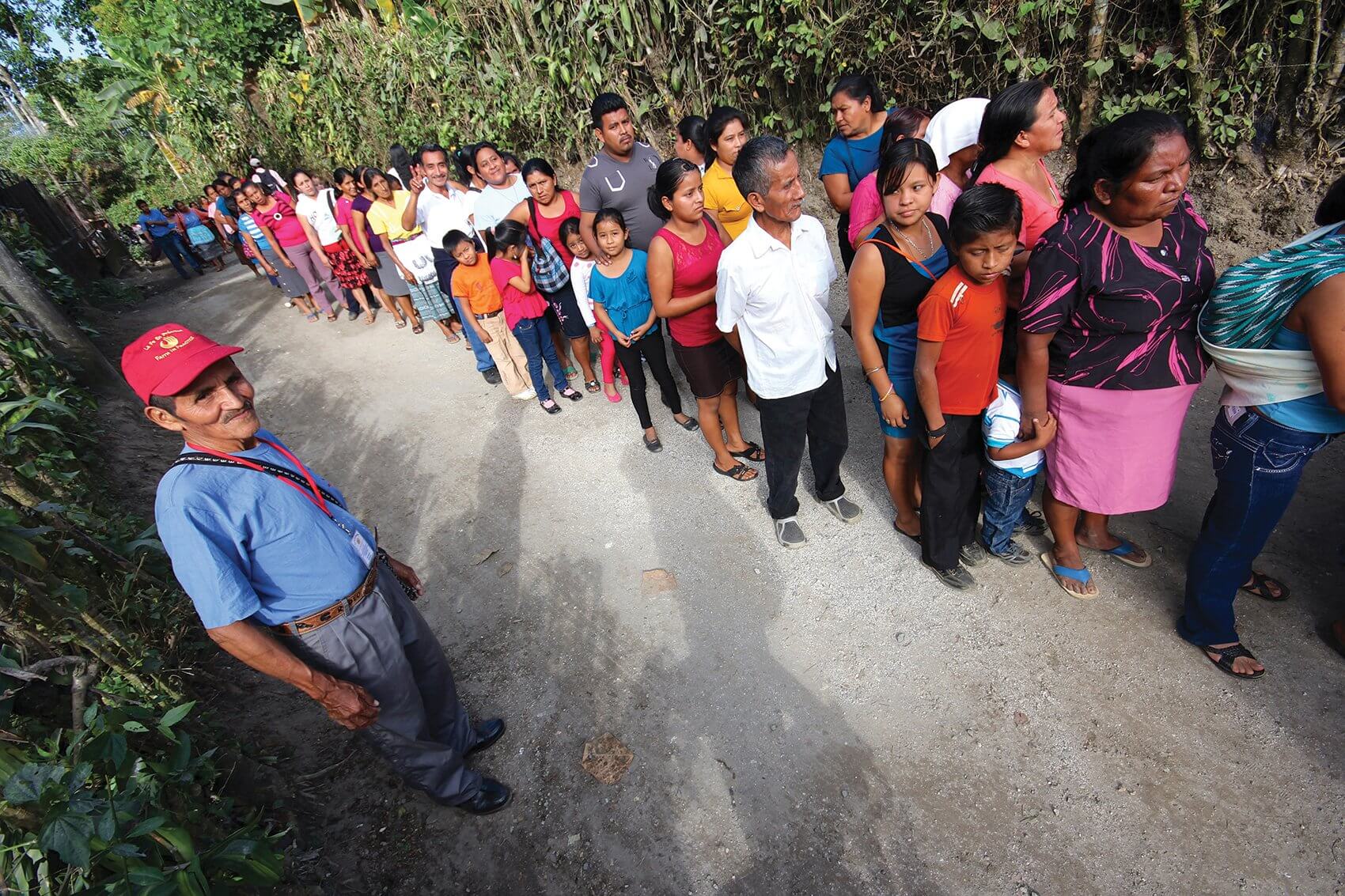 Just over a week into the new year, a time when most are in a post-holiday recovery daze, a medical mission group of 55 team members arrived in Pueblo Nuevo, Guatemala. Led by Philip Johnson, M.D., division director, professor and vice chair of general medicine at The University of Texas Health Science Center at Houston (UTHealth) Medical School, the group was preparing to spend a week providing free health care to Guatemalan citizens who desperately need it.

Guatemala is a strikingly beautiful country, but the towering mountains and lush green landscape also harbor extreme poverty. Three decades of civil war ending in the 1990s took a toll on many Guatemalan citizens. More than 50 percent of Guatemala’s population live in poverty, according to The World Bank, and that number increases greatly among the indigenous Mayan population living in remote, mountainous areas. For the past decade, Johnson and his wife, Linda, have led a team to rural villages to offer what may be the only health care villagers will see for the entire year—or even longer.

Johnson’s love for serving the people of Guatemala dates back to high school, when he first traveled to the country with Houston-based nonprofit Amigos de las Americas. He continued to travel to Guatemala through college and completed a two-month long elective in the country during medical school.

Johnson has since passed his love on to many of his colleagues at UTHealth, as well as the medical students and residents who embark on his twice yearly trips to villages in Guatemala, organized by Faith in Practice. The organization targets the most remote areas of Guatemala, which do not have health services. Faith in Practice’s structure involves a Guatemalan staff and a local volunteer network to ensure the patients referred to surgery are accompanied during the referral process and the patient remains the central focus throughout care.

Many of this year’s team members are regulars, traveling with Johnson year after year. Robin Hardwicke, Ph.D., an associate professor of general medicine and obstetrics and gynecology, has now completed nine consecutive annual trips to Guatemala, motivated by the need she experienced from the start of her very first visit to the country.

“I was blown away with surprise. We arrived to a line of people that was farther than my vision can see waiting at the gates hoping for care and assessment by us. I never imagined the degree of need,” she said, describing that first visit. “There is no way I could see the number of patients here in the United States like what we try to see and accomplish in rural Guatemala. There are just so many people that are in desperate need of basic general health care that we in the U.S. take for granted.”

The trip consisted of four days seeing patients, and more than 2,500 people visited five different clinics: general medicine, gynecology, pediatrics, dermatology and dental. Complaints ranged in severity from those that could be solved with cold remedies, antibiotics or ibuprofen to much more serious issues requiring more extensive treatment or surgical referrals.

“We made 230-some referrals for surgery. People who have had hernias, have had uterine prolapse, have other small tumors, things that need removing. They’ve waited around because there’s no access to the surgery,” said Johnson. “It’s not uncommon to see patients who have had hernias that have affected their work for five or ten years. And we can remove those and they can go back to work.”

Hardwicke, who oversees the obstetrics and gynecology clinic, said her team saw as many as 50 to 100 women per day for a variety of gynecologic or obstetric needs, many of whom had never had a pelvic exam before, much less any form of obstetrical care.

“Many Guatemalan women don’t understand normal menstrual cycles, they don’t understand normal premenstrual symptoms, they don’t know anything about their bodies, however, they may have already been pregnant 10 times,” said Hardwicke. “They typically don’t have prenatal care, so one might imagine what a joyous treat it is to perform an ultrasound and show her a live picture of her baby’s heart and reassure her the baby is doing OK.”

“There is no way I could see the number of patients here in the United States like what we try to see and accomplish in rural Guatemala. There are just so many people that are in desperate need of basic general health care that we in the U.S. take for granted.” — Robin Hardwicke, PH.D., Associate Professor of General Medicine and Obstetrics and Gynecology at UTHealth

One of the most crucial roles the obstetrics and gynecology clinic fulfills is cervical cancer screening. According to the World Health Organization, the cervical cancer mortality rate in Latin America and the Caribbean is three times higher than in North America, and for many of the women visiting Hardwicke’s clinic, this may be their only shot at finding it. To that end, Johnson explained the team performs a basic cervical screening, which is much more rapid than a traditional pap smear.

“You use acetic acid wash on the cervix of these ladies that are at risk and you do an inspection and then do cryotherapy on any lesions they have that might be precancerous,” said Johnson. This year the OB-GYN team referred nine women who appeared to already have cervical cancer.

For the Guatemalan patients, these volunteers can be lifesavers, but the experience is often life-changing for the health care workers as well. Johnson said his trips to Guatemala as a teenager are what ultimately inspired him to become a physician. Now they offer him the opportunity to get back to the basics of medical care.

“You’re working with other people really closely. You can ask questions, the pharmacy is right there, the patients  don’t have to be screened for insurance, you don’t have to use computer systems to send the prescriptions off or do referrals,” said Johnson. “It’s a little like the way medicine used to be practiced.”

Fiona Strasserking, a fourth-year medical student at UTHealth who traveled to Guatemala for the first time this year, said the trip offered the kind of education that can’t be found in the classroom or a traditional American hospital. Strasserking is no stranger to health care disparities, having grown up in Sierra Leone; however she was still surprised by her trip to the remote villages of Guatemala.

“Given where Guatemala is, central America, and the fact that the Americas are more economically stable than Africa, I was actually surprised that Guatemala and the people we saw there were worse off than I would have expected for this part of the world,” she said. “Better than Africa, but worse than my expectation of the Americas.”

Like Johnson, Strasserking’s experiences in areas that lack basic health care inspired her to become a physician. She recalled the childhood friend who died of rabies from a dog bite because she did not have access to treatment, as well as a physician mentor who succumbed to the Ebola virus.

“Health care is one of the basics of human life that should not be bargained because somebody doesn’t have money or doesn’t have the resources,” she said. “It should be something that everybody is entitled to.”

Trips such as this one are invaluable for medical students, Strasserking added, opening their eyes to lives so different from their own. All medical students are directly supervised by licensed physicians, but still have the opportunity to be very involved in
the process.

Hardwicke echoed those sentiments, saying the trips have the power to “ground” participants, helping them realize how fortunate they are.

“We take medical students and residents with us, and I love to have that opportunity to teach the young people in a setting that is so vastly different from our own in the U.S.,” she said. “We also take college students with us and to be able to watch them learn and watch them recognize the problems of the world, there’s nothing else like it.”

Hardwicke is determined to train her replacement. She is in search of that particular individual on a daily basis, and said she knows it will take many years to get that person trained in the same way that she was by Johnson. “Bringing the value of humanity into a student’s life is invaluable,” she said.

Taking students and residents on the trip also has the added benefit of bringing fresh eyes to a routine that has become familiar to veterans like Johnson and Hardwicke. In fact, Hardwicke recalled Strasserking noting a piece of equipment that could be helpful on future trips—a probe that would enable them to more accurately screen for heart defects.

“The OB-GYN clinic had a perfect machine with both the 2-D black and white pictures and color capability, and everything else that we’d need for an echocardiogram,” Strasserking explained, “but they didn’t have the probe that you’d attach to it to look at the heart.”

The team has taken note of Strasserking’s suggestion, and will hopefully have the means to bring the cardiac probe to use on future trips.

“That’s something I would never have known or thought of,” Hardwicke said.

By the end of the week, the team had filled over 6,500 prescriptions, treated 432 people for dental pain, and given away 400 pairs of reading glasses and close to 1,000 pairs of sunglasses, crucial for many of the patients who spend hours laboring under the blazing sun. But the team did not leave empty-handed. Stefano Sdringola, M.D., professor of cardiovascular medicine and the Weatherhead Distinguished Chair of Heart Disease at UTHealth, traveled to Guatemala for the first time and said his experiences during that week will stick with him going forward. Once he retires, he plans to spend his life taking similar trips.

“There is a feeling of joy and happiness that comes from giving ourselves to others,” said Sdringola, who traveled with his teenage daughter, a college student planning to study medicine. “It’s a great teaching experience and we can receive more than we can give to them.”