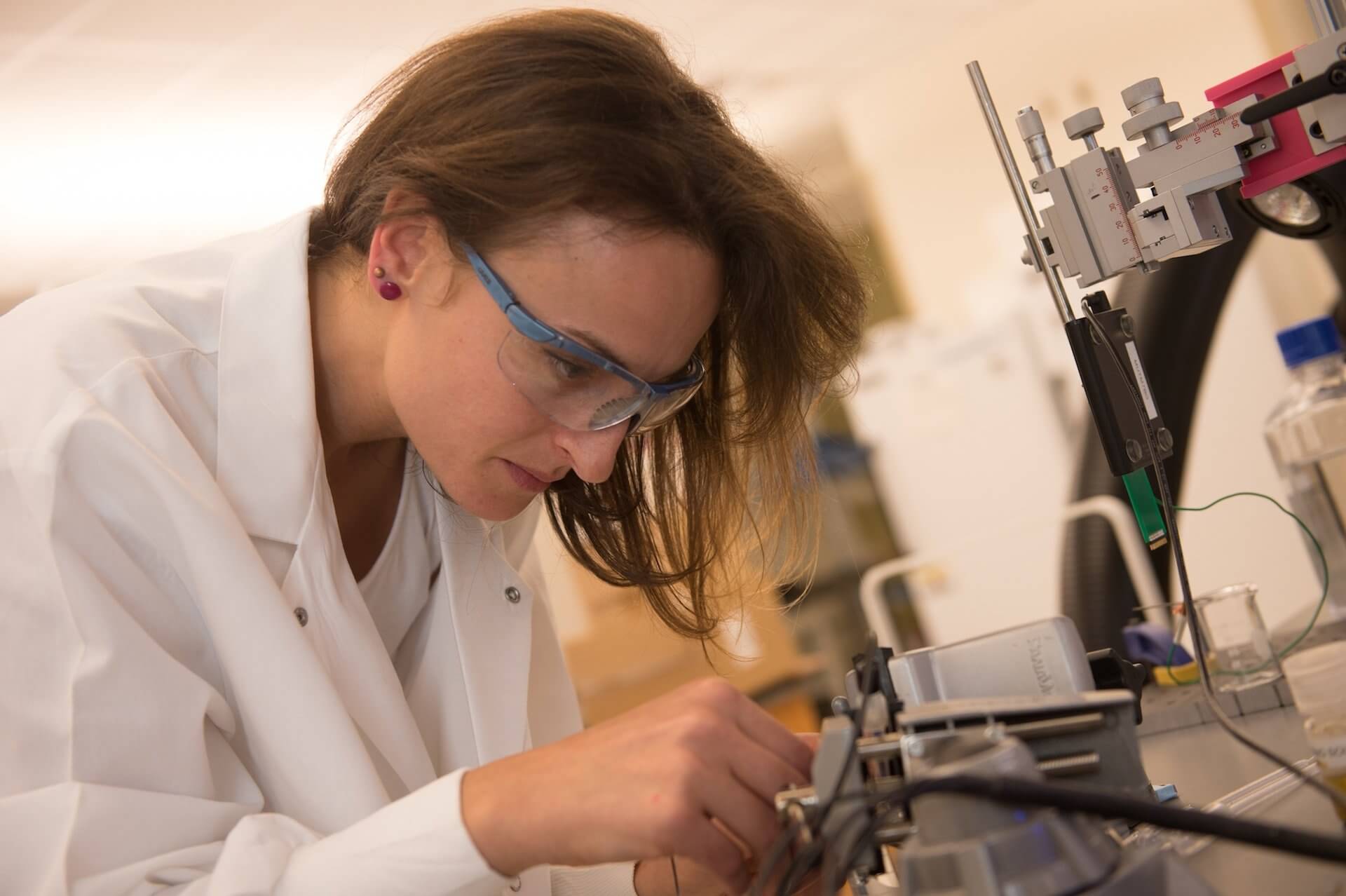 Carbon nanotube fibers invented at Rice University may provide the best way to communicate directly with the brain.

The fibers have proven superior to metal electrodes for deep brain stimulation and to read signals from a neuronal network. Because they provide a two-way connection, they show promise for treating patients with neurological disorders while monitoring the real-time response of neural circuits in areas that control movement, mood and bodily functions.

New experiments at Rice demonstrated the biocompatible fibers are ideal candidates for small, safe electrodes that interact with the brain’s neuronal system, according to the researchers. They could replace much larger electrodes currently used in devices for deep brain stimulation therapies in Parkinson’s disease patients.

They may also advance technologies to restore sensory or motor functions and brain-machine interfaces as well as deep brain stimulation therapies for other neurological disorders, including dystonia and depression, the researchers wrote.

The fibers created by the Rice lab of chemist and chemical engineer Matteo Pasquali consist of bundles of long nanotubes originally intended for aerospace applications where strength, weight and conductivity are paramount.

The individual nanotubes measure only a few nanometers across, but when millions are bundled in a process called wet spinning, they become thread-like fibers about a quarter the width of a human hair.

“We developed these fibers as high-strength, high-conductivity materials,” Pasquali said. “Yet, once we had them in our hand, we realized that they had an unexpected property: They are really soft, much like a thread of silk. Their unique combination of strength, conductivity and softness makes them ideal for interfacing with the electrical function of the human body.”

The simultaneous arrival in 2012 of Caleb Kemere, a Rice assistant professor who brought expertise in animal models of Parkinson’s disease, and lead author Flavia Vitale, a research scientist in Pasquali’s lab with degrees in chemical and biomedical engineering, prompted the investigation.

“The brain is basically the consistency of pudding and doesn’t interact well with stiff metal electrodes,” Kemere said. “The dream is to have electrodes with the same consistency, and that’s why we’re really excited about these flexible carbon nanotube fibers and their long-term biocompatibility.”

Weeks-long tests on cells and then in rats with Parkinson’s symptoms proved the fibers are stable and as efficient as commercial platinum electrodes at only a fraction of the size. The soft fibers caused little inflammation, which helped maintain strong electrical connections to neurons by preventing the body’s defenses from scarring and encapsulating the site of the injury.

The working end of the fiber is the exposed tip, which is about the width of a neuron. The rest is encased with a three-micron layer of a flexible, biocompatible polymer with excellent insulating properties.

The challenge is in placing the tips. “That’s really just a matter of having a brain atlas, and during the experiment adjusting the electrodes very delicately and putting them into the right place,” said Kemere, whose lab studies ways to connect signal-processing systems and the brain’s memory and cognitive centers.

Doctors who implant deep brain stimulation devices start with a recording probe able to “listen” to neurons that emit characteristic signals depending on their functions, Kemere said. Once a surgeon finds the right spot, the probe is removed and the stimulating electrode gently inserted. Rice carbon nanotube fibers that send and receive signals would simplify implantation, Vitale said.

The fibers could lead to self-regulating therapeutic devices for Parkinson’s and other patients. Current devices include an implant that sends electrical signals to the brain to calm the tremors that afflict Parkinson’s patients.

“But our technology enables the ability to record while stimulating,” Vitale said. “Current electrodes can only stimulate tissue. They’re too big to detect any spiking activity, so basically the clinical devices send continuous pulses regardless of the response of the brain.”

Kemere foresees a closed-loop system that can read neuronal signals and adapt stimulation therapy in real time. He anticipates building a device with many electrodes that can be addressed individually to gain fine control over stimulation and monitoring from a small, implantable device.

“Interestingly, conductivity is not the most important electrical property of the nanotube fibers,” Pasquali said. “These fibers are intrinsically porous and extremely stable, which are both great advantages over metal electrodes for sensing electrochemical signals and maintaining performance over long periods of time.”

Co-authors are Rice alumna Samantha Summerson, a postdoctoral researcher at the University of California, Berkeley, and Behnaam Aazhang, the J.S. Abercrombie Professor of Electrical and Computer Engineering at Rice. Pasquali is the A.J. Hartsook Professor of Chemical and Biomolecular Engineering, chair of the Department of Chemistry and a professor of materials science and nanoengineering and of chemistry. Kemere is an assistant professor of electrical and computer engineering.

The Welch Foundation, the National Science Foundation and the Air Force Office of Scientific Research supported the research.