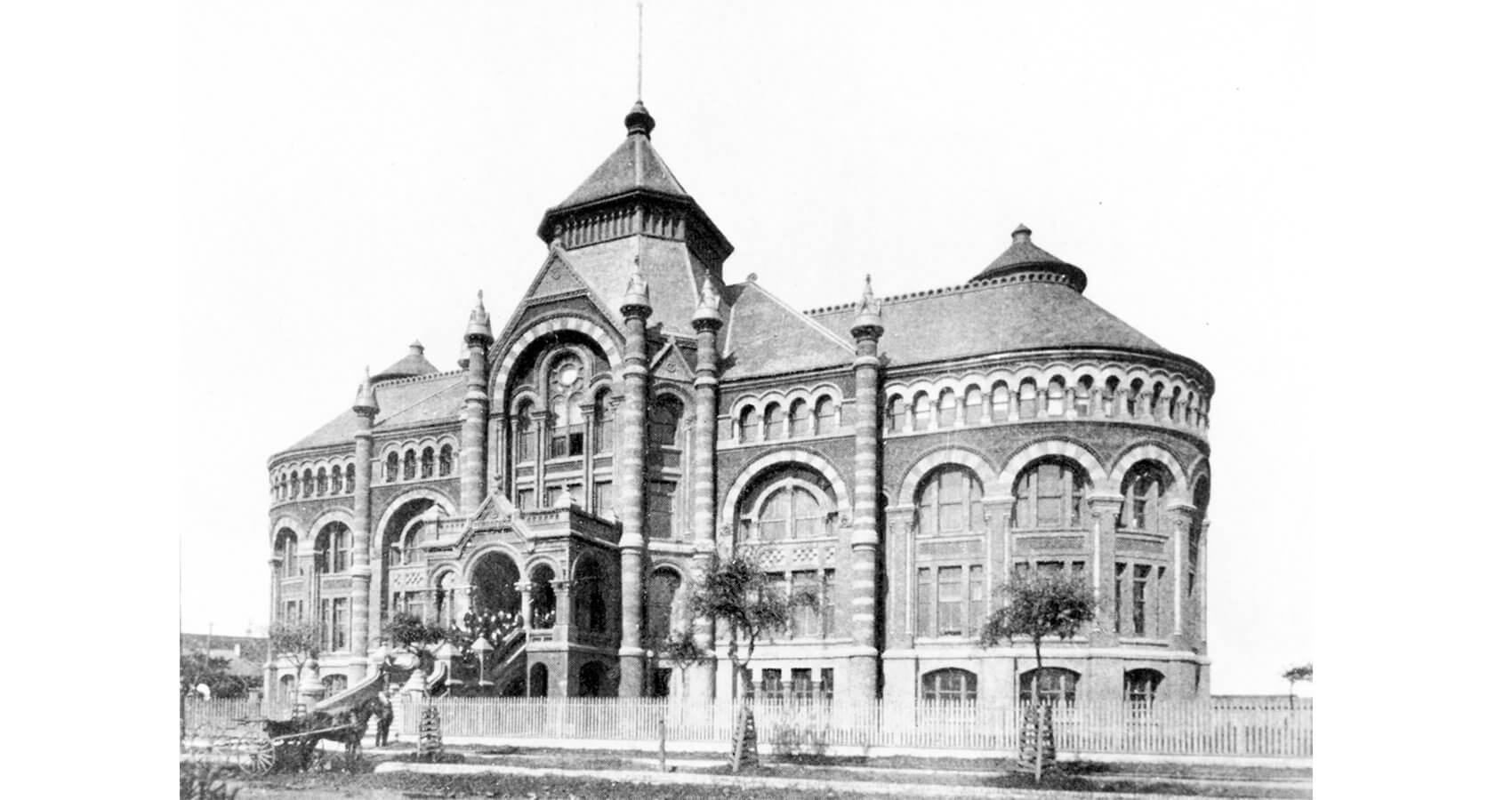 The University of Texas Medical Branch at Galveston is the picture of a modern academic medical center. Students hustle across the grounds, rushing to class. Researchers in white coats are hard at work in the Galveston National Laboratory and numerous other research buildings. Patients check in for care at John Sealy Hospital and clinics, and the emergency department’s Level 1 Trauma Center is always at the ready. Standing at the center of it all is a stately red building of a strikingly different style than the rest of campus. The Ashbel Smith Building, or Old Red, was once the entirety of the medical school, flanked by its clinical facility, the original John Sealy Hospital. Although Old Red is now surrounded on all sides by more than a century of progress, the building still serves as a reminder of the university’s humble beginnings as the first state medical school in Texas.

The founding of UTMB in Galveston began with a vote. In an 1881 state referendum, the people of Texas overwhelmingly selected Galveston as the site of the medical branch of the University of Texas—70 percent of voters chose Galveston over Houston. At the time, Galveston was a bustling seaport town—one of the largest ports in the United States and the commercial center of Texas. State funds secured the school’s location on the eastern end of The Strand and architect Nicholas Clayton was hired to design it. Clayton was one of the first professional architects in the state of Texas, and his work was already known on the island.

“In the height of his career, from 1874 to 1906, he did 225 buildings in Galveston alone,” said medical historian Heather Wooten, Ph.D. “Everything from the beautiful Bishop’s Palace on Broadway, to a lot of the old established churches like the First Presbyterian. His contribution cannot be underestimated.”

Though Clayton was prolific throughout the island, Old Red was a particularly significant project for the architect. Built of red sandstone and granite, topped with a dome and covered with ornate Romanesque Revival details, Old Red was a work of art.

“Of all those beautiful buildings he designed throughout Galveston, and also throughout Texas, Old Red was really one of his babies,” said Wooten. “What he thought was his masterpiece.”

On Oct. 5, 1891, what was officially known as the Medical College Building opened its doors to the first students—just 14 first-year students, five second-year students, four third-year students—and 13 faculty members. At that time, medical school lasted three years and did not require any college prerequisites. Though the students were green compared to today’s medical students, the faculty was not easy on them.

“They may have had a very raw group of students, but their standards were the top,” said Wooten. “It was like, ‘Just because our student body is struggling does not mean we lower our standards to meet them. They are to climb and reach it.’”

Those first years were a time of growth for UTMB. By 1897, the student body comprised over 200 students and a fourth year of curriculum was added. But just about a decade in, during the summer of 1900, a disaster happened that almost destroyed UTMB, as well as the entire island of Galveston.

Early Sept. 7, 1900, the national Weather Bureau issued a storm warning for the Gulf Coast region. Galvestonians watched clouds gather, but even as waves swelled and winds howled, no one could have predicted how bad it would become.

The full force of the hurricane hit Sept. 8. By the time it was over, between 6,000 and 8,000 lives were lost in Galveston, and the majority of the island’s structures were destroyed.

Nicholas Clayton rode out the storm in Galveston, and was shocked to find much of his life’s work still standing, including Old Red. Though badly damaged, it fared better than most buildings on the island. The walls were intact, but most of the roof was destroyed, as was the dome.

UTMB physicians tended to the injured. Just days after the storm, a telegram from Beauregard Bryan, a regent of the University of Texas, declared, “The University of Texas stops for no storm.” It became a rallying cry for the campus, and two short months after the hurricane, UTMB opened its doors again. In fact, thanks to the UT regents’ generosity, UTMB was repaired and restored to be better than ever.

“We honor our long history of accomplishment and service by staying focused on the future.” — David L. Callender, M.D., President of The University of Texas Medical Branch at Galveston

The next decades saw a highly anticipated visit from President Franklin Delano Roosevelt in 1937, and new construction as the medical school outgrew Old Red. Another local disaster, the Texas City explosion in 1947, called upon UTMB physicians to care for about 800 of those who were injured when a ship carrying nitrate-based fertilizer exploded, killing nearly 600 and injuring over 3,000. Truman Blocker Jr., M.D., a professor and chief of plastic and maxillofacial surgery at the time of the disaster oversaw treatment of the victims.

Blocker became world-renowned for his work with burn victims, much of which was inspired by the victims of the Texas City explosion, still to this day the worst industrial disaster in U.S. history. As a result, Blocker was largely responsible for bringing the Shriners Hospitals for Children to the UTMB campus in the 1960s, making UTMB the location of the very first of the Shriners’ burns institutes. In 1967, the UT regents named him the first president of UTMB. The burn treatment center in John Sealy Hospital, one of the world’s leading burn facilities, is called the Blocker Burn Unit.

The mid-1900s represented a bit of a shift in focus for UTMB. Chauncey Leake, Ph.D., became dean of UTMB in 1942 and during his 13-year tenure brought an increased emphasis on research. Leake expanded academic programs on campus and offered increased laboratory space to faculty.

“He really pushed that a medical school is not just a teaching school, it is a research institution,” said Wooten.

While the expansion of the university brought about exciting developments, it also nearly caused the demise of Old Red. In the 1960s, the building was set to be demolished in order to build a parking lot.

“By the ‘60s, it was pretty much used for subsidiary offices or storage. It did not have the same importance anymore,” said Wooten. “With technology advancing, Old Red couldn’t handle it and became obsolete.”

Armond Goldman, M.D., a UTMB graduate and professor in the Department of Pediatrics for nearly five decades, recalled the discussion happening at the time.

“The thought was, ‘Well, there’s this old building here, and we can use it to attract more patients to come in, so when they park they’ll be very close to the campus and hospitals,’” he said. “I think it was misguided, but I understand.”

Outcry from alumni and faculty members, however, was fierce.

Goldman echoed those sentiments from the faculty point of view.

“That building held a sort of spirit to the faculty who helped educate in it,” he said. “Our species is very interested in symbols. For UTMB, Old Red was the principal symbol and they felt they couldn’t do without it.”

Through aggressive fundraising, the building was saved and went through extensive renovations in the 1980s, costing a total of $6.4 million. The Graduate School of Biomedical Sciences and the Institute for the Medical Humanities were moved into the building, which was rededicated in April of 1986. The Institute for the Medical Humanities was first in the U.S. to offer a Ph.D. degree in medical humanities. Wooten later earned her Ph.D.—taking classes in Old Red—and wrote a book about the building’s history.

“You’re going up this huge cedar staircase. It has all the creaks and everything of an ancient staircase. You’re going in these halls that are huge, high-ceilinged, and when you shut the door it reverberates—‘boom’. All of that gave this sense of history to it. You are in a place where so many other people have been.”

Thanks to the efforts to save it, Old Red is now a part of UTMB’s future, one that continues the legacy of research set into motion by Leake. In 2003, the National Institutes of Health selected UTMB as the site of the Galveston National Laboratory, one of two such laboratories in the United States. It contains Biosafety Level 4 laboratories, where researchers study naturally occurring diseases like SARS, West Nile, and Ebola, as well as countermeasures for microbes that could potentially be used in bioterrorism.

In 2008, UTMB was again devastated by a storm: Hurricane Ike. The storm surge flooded the ground floors of buildings throughout campus, and the amount in damages was astronomical. But again, “The University of Texas stops for no storm.” After almost seven years and $1 billion in repairs and improvements, the campus is thriving once more. A new hospital is under construction, the Jennie Sealy Hospital. Located on the site of the recently demolished Jennie Sealy Building and old Shriners building, it will contain 310 patient rooms and 20 operating suites. The $438-million facility is expected to be completed later in 2015 and operational in 2016. UTMB recently began operating the Angleton Danbury Medical Center, and will open another hospital and emergency department at its League City location.

UTMB, which will celebrate its 125th anniversary in 2016, has been home to many firsts for the state of Texas—the first university-affiliated nursing school in the U.S. in 1896, the first female physician to graduate in 1897, the first African-American physician to graduate in 1953, the first school of health professions in the state. Even as the institution looks forward to a future of more innovation and discovery, it remains dedicated to its legacy and storied past.

“We’re proud of our legacy,” said UTMB president David L. Callender, M.D. “We honor our long history of accomplishment and service by staying focused on the future. The future of health care lies in the hands of people like our researchers, clinicians and educators. Texans are proud of our heritage and UTMB is an integral part of our state’s medical history and future.”

“You really don’t know who you are unless you know where you’ve been and where you’ve come from,” added Wooten. “It was all about the patient…All the compassion, empathy, research and burning the night oil was to make this profession an altruistic profession.”

That mission of bettering the health of society remains a constant, from UTMB’s humble beginnings in that single red building, to the busy, vibrant campus it is today.