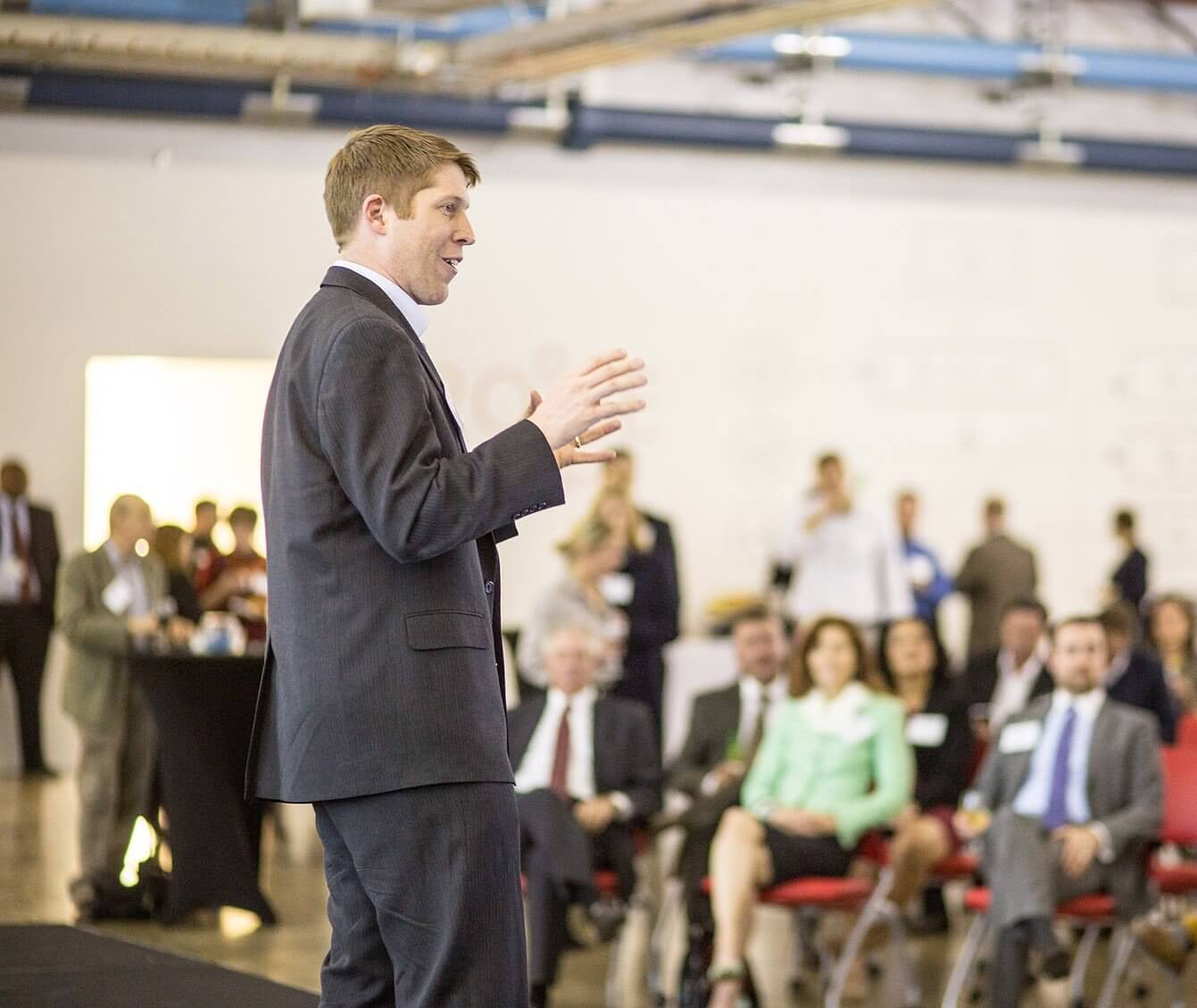 Set against the luminescent backdrop of the dual screens that dominate the stage at TMC|X—the accelerator program within Texas Medical Center’s Innovation Institute—nine early-stage health information technology (IT) entrepreneurs faced a daunting, yet essential, task. In a three-minute timeframe, as seconds visibly ticked away on a gigantic digital clock at the back of the room, they were charged with presenting their companies to an eager audience of potential investors, successful entrepreneurs, business leaders and community supporters from across Houston. With a microphone pinned to their lapel and poised to deliver presentations that have been sculpted and refined over the past three months, these aspiring innovators rose to the occasion.

“I want to congratulate all of these teams, because from the day you started on this same stage to today, you’ve improved dramatically,” said Robert C. Robbins, M.D., president and chief executive officer of the Texas Medical Center, in the moments before the entrepreneurs took the stage. “It’s really been incredible to watch—you’re all winners tonight because you keep making progress, and I’m sure you’ll continue that trend.”

The trajectory that Robbins alluded to has been in motion since December of 2014, when these nine teams began a 3-month workshop series dedicated to helping health IT entrepreneurs grow their budding health care businesses. Stemming from a partnership between Village Capital and the Texas Medical Center, and in conjunction with the Sorenson Global Impact Investment Center, the program launched at TMC|X in December and the second workshop was held in Salt Lake City in January.

Prior to the third and final workshop session—which took place on February 18-21 at TMC|X—the entrepreneurs spent the preceding two months working with mentors and hospital stakeholders in Houston and Salt Lake City as their business models and messaging continued to crystalize. Coming from all across the country and possessing diverse backgrounds, the teams were unified in their commitment to use digital health solutions to overcome health disparity and eliminate barriers to treatment and care.

“The process of building a company is really about articulating and testing assumptions and gathering evidence. We have a process that we’ve refined over 35 partnerships like this one,” noted Ross Baird, executive director of Village Capital, “but the TMCx partnership is unique. To be able to blend our expertise at this stage of entrepreneurship with the Texas Medical Center’s unparalleled deep industry expertise and network of relationships is a unique value proposition to entrepreneurs.”

That intersection of Village Capital’s expertise and Texas Medical Center’s ecosystem was especially evident as the entrepreneurs presented their solutions on stage. With over 160 attendees, running the gamut from possible customers to venture capitalists, peppered throughout the expanses of TMC|X, the board was set for some mutually beneficial mingling.

“I think our expertise at this stage of entrepreneurship combines with another component of value, which is Texas Medical Center’s unparalleled deep industry expertise and network of relationships.” — Ross Baird, Executive Director of Village Capital

“The number one reason why I’ve come back for the other sessions is the network of peers and mentors that is available to us,” affirmed Gregory Hoffman, vice president of sales and business development for 1DocWay, a startup striving to build broader telepsychiatry networks for hospitals. “Almost everything about that network, from how it’s been arranged by the Texas Medical Center to Village Capital’s philosophy of putting people of like minds in similar situations together, is the special sauce.”

In addition to pitching to investors and networking with Houston’s entrepreneurial community, the startup teams had the opportunity to present their solutions to the medical community as well. Physicians, nurses, health IT professionals, patient service coordinators, and hospital leadership from throughout the Medical Center were given a privileged first look at the emerging technologies, offering their feedback in return.

While those events were structured to lay the foundation for fruitful interactions, there were several sessions that sought to capitalize on the depth of experience housed within the Texas Medical Center. One such mentor-driven session was a mock board meeting, providing entrepreneurs with a glimpse at the realities of navigating administrative meetings.

“As an entrepreneur myself, a practicing clinician, and a board member on several small startups, I think the number one piece of advice I would give is to not overstate your own capabilities,” reflected Col. John Holcomb, M.D., director of the Memorial Hermann Texas Trauma Institute – Memorial Hermann Healthcare System, who embraced his role as a mock board member with gusto. “Surround yourself with smart people who have a variety of experiences that include medical, business and financial. Communication with all the members of the board in your company is extremely important, as is the understanding that there will be problems that arise along the way, and it is necessary to work collaboratively to overcome them.”

Other sessions were a little more casual, even when exposing the entrepreneurs to experts in their respective fields. One was punctuated by the crinkling of tin foil and intermittent pauses for eating as the teams gathered during lunch to discuss health policy with Arthur Garson, Jr., M.D., MPH, director of the Texas Medical Center Health Policy Institute.

“Probably the most important condition to navigate is that people are often set in their ways,” he admitted, expressing his thoughts candidly. “You may not be asking them to think completely outside of the box, but it’s hard—they didn’t necessarily come to work to think, they came to get their job done. Very early on, maybe even before your pitch, you may want to ask what problems their facing—if you’re willing to sit and listen to people and to at least understand their problem, you might have a better shot at fitting into their world. Being able to be humble enough to actually listen within that framework is very valuable.”

In addition to providing the guidance and connections necessary for a budding business to flourish, Village Capital and the Texas Medical Center will also be contributing something a little more concrete: capital. On Friday, March 3rd, AsthmaMD and 1DocWay were selected by their fellow entrepreneurs to receive two $50,000 investments from both Village Capital and the Texas Medical Center. Baird hopes that contribution will simply be a drop in the bucket compared to the money that these companies have the potential to raise coming out of the program.

“Health IT can improve access to valuable information for patients, increase quality of care, and lower the cost of receiving it,” he said. “We have great entrepreneurs with wonderful technologies—what these companies lack are serious institutional partners that can let them scale their technology. That’s the asset that TMC|X has over any other entrepreneur support network organization in the world.”

Baird believes that Village Capital’s dedication to building a global network—they’ve invested in 40 companies across seven continents—aligns closely with the Texas Medical Center’s ambition to be a global center for excellence.

“We believe that entrepreneurship lies at the center of solving major global challenges,” said Baird. “Most people think that businesses exists only to make money, and that solving problems is left to the government and the philanthropic world, but business is fundamentally about problem solving. If business leaders are solving problems that are important and relevant to society, then business can be the greatest force for good in the world.”

One of the innovators, Michael Zetner, Ph.D., president and chief executive officer of Speak MODalities, which creates software apps that help kids with autism learn speech and language skills, is a testament to the power of that potential.

“At my company, we’re developing a product where if we succeed, there are no losers,” he said. “With most companies, if you do something more efficiently, somebody loses jobs, or if you produce something faster the environment might suffer, but we don’t have that problem. If we succeed, kids learn more, therapists are able to work at a faster pace with the kids, and the families win, especially.” Thankfully, success in business and the betterment of society don’t have to be mutually exclusive.