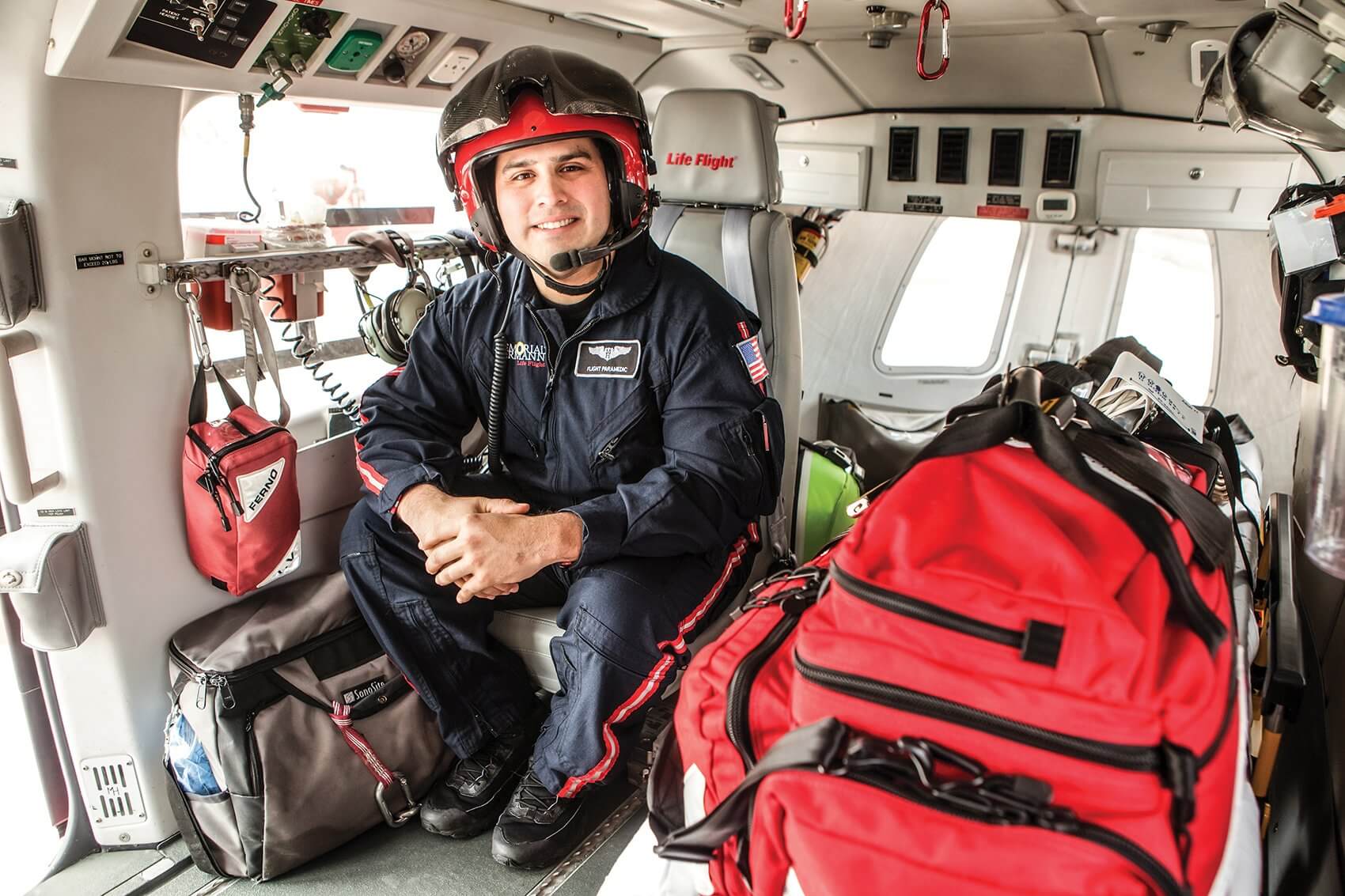 Q | How did you hear about Hiring Red, White & You?

A | I went around with the Life Flight team as part of a two-week training camp that they would set up for us. I really liked the program so I kept volunteering to go back. I went three times over a period of 18 months to two years. I would come back to Memorial Hermann every six months or so and fly with Life Flight for two weeks. I applied [for a permanent position] after leaving active duty in October.

Q | What are your responsibilities in the medical center?

A | We have bases on the north, south, east, and west portions of the city and Life Flight will respond to pretty much anywhere within a 150-mile radius of anyone that needs to be brought in from another hospital for a higher level of care. Or it’s someone on the side of the road who EMS already anticipates to be very critical, so they need to arrive to the hospital pretty quickly.

Q | How did your military experiences prepare you for your current job?

Q | Describe the transition from the military to civilian life.

A | I don’t travel as much, which is great. The transition has been really nice. Before, in the Army, we were more search and rescue here stateside. You wouldn’t really be a flight medic unless you were going to Afghanistan. That’s where you would really pick up patients and stuff. So I’m definitely flying more because the service is so busy. It’s a different uniform. But the same thing kind of applies – it’s very professional, very structured. For the Army I would travel a lot for work. I think every year I would do at least 100 days in a hotel if not more. Here at Hermann it’s local, and I like that. There’s no real big difference minus the uniform change and the fact that I do a lot of patient care.

Q | Do you see yourself in this career for the long-term?

Q | What do you love most about your job?

A | I like the fact that you don’t really have the same day twice. One day you could be doing a lot of sick transfers from hospitals and the next you could be landing on the side of the highway. You never know whenever you’re responding. And the staff I work with is great. That’s probably one of my favorite things—the people I work with. Everyone gets along. A lot of the pilots are ex-military as well, and these staff members have befriended me and they remembered me from when I would rotate. So I was excited when I got hired and they showed the same amount of enthusiasm for me. They have really helped me out and I really do enjoy the different people I get to work with. There’s just a really positive attitude here with Life Flight. Everybody seems really happy with the organization and the program and the way it’s run.

Q | Do you like working with others who also have a military background?

A | They definitely understand some of the growing pains and changes that I’m going through transitioning from active duty to this job. A lot of them are retired so they kind of understand because they went through it, too. I’m here transitioning and they totally understand what I’m doing and where I’m coming from. They offer bits of advice here and there.

By Maggie Galehouse May 25, 2020
Veteran Profile