The Other Guy’s Toolkit

Looking beyond the boundaries of their respective fields, professionals from Houston’s medicine, energy and aerospace industries gather to take a multi-disciplinary approach to industry challenges

The Other Guy’s Toolkit 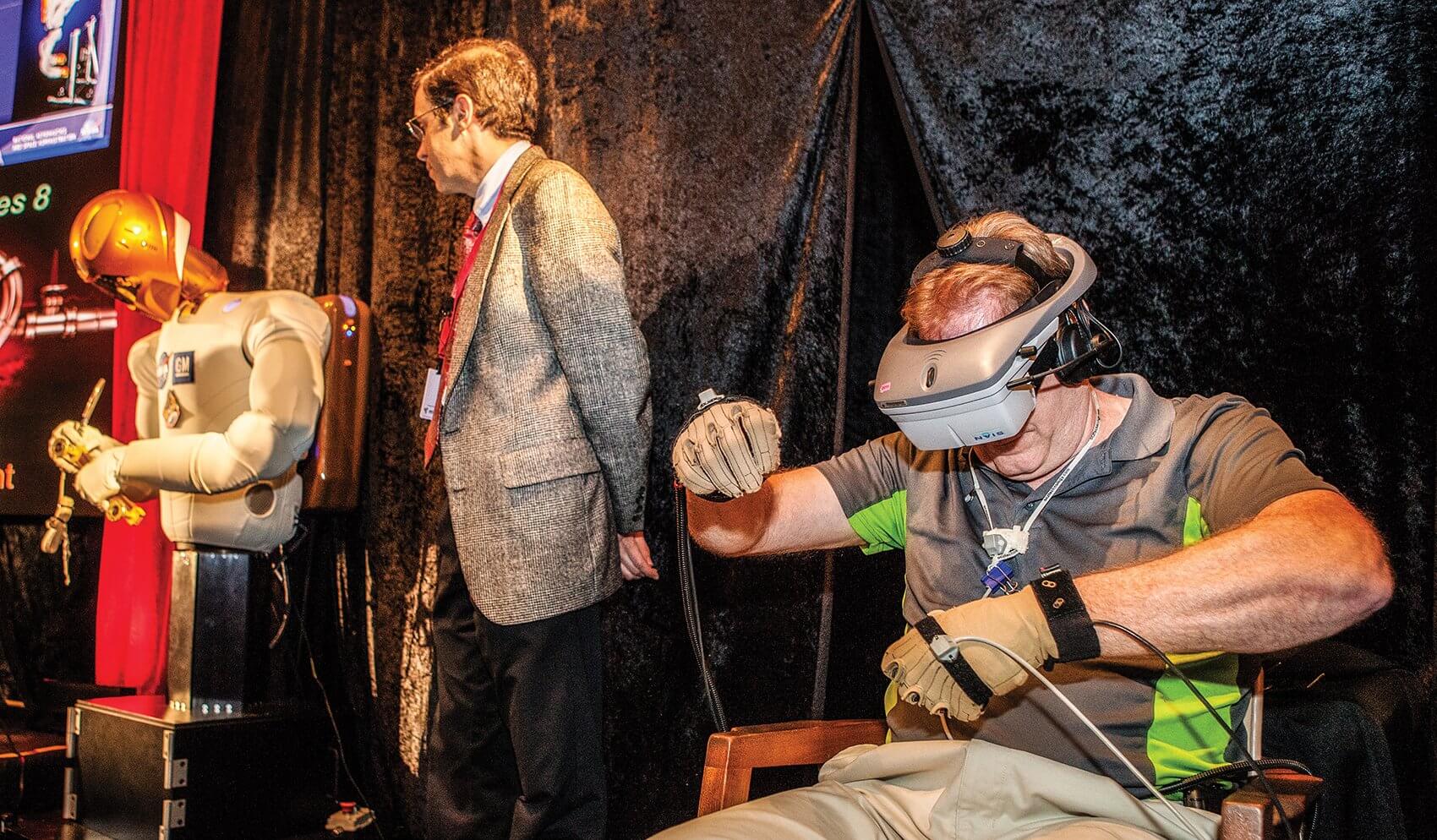 Deftly maneuvering gloved hands that monitor the position of his fingers, and adorned with a mechanical visor that allows him to view the two stereo screens inside, NASA engineer Mike Goza delicately closes his fingertips together. On the stage to his right, a 300-pound humanoid robot known as Robonaut—complete with a gilded helmet and white fabric torso that echoes the spacesuits worn by its human counterparts—tightens its grip on a handrail and tether hook used on the outside of space stations.

“That tether hook is not a device designed for robots to work with,” admitted Ron Diftler, Ph.D., Robonaut project manager at Johnson Space Center. “Mike’s telepresencing himself into the robot’s body, so that he becomes, essentially, like the robot. It makes for a natural way to use all of the skills that you have as a human being and transfer them to the robot.”

While Robonaut was designed to assist astronauts on tasks in which another pair of hands would be beneficial, as well as perform jobs either too risky or mundane for humans, the breadth of its potential applications are not limited to the upper echelons of outer space. A humanoid robot that can utilize tools designed for human beings might also be implemented in dangerous areas on an oil and gas site. It may even find its way into an operating room.

“The nice thing about Robonaut is that it allows us to pick up instruments that were designed for surgeons and put them in this type of humanoid platform with dexterous fingers—it opens up really interesting possibilities,” said Brian Dunkin, M.D., chief of endoscopic surgery and medical director of the Houston Methodist Institute for Technology, Innovation, and Education (MITIE). “When you look at the medical robots that are out there for use in minimally invasive surgery and orthopedic surgery, their armamentarium is limited. Wouldn’t it be nice to be able to just pick up the instruments that we use in their normal environments?”

Robonaut’s capabilities were unveiled during Pumps and Pipes, an annual conference that serves as a platform for cross-fertilization of ideas among three quintessentially Houston industries—medicine, energy and aerospace. As the presentation unfolded, detailing how an advanced piece of aerospace technology might also prove useful to oil companies and medical practitioners, the thought behind the day-long event was clear.

“The idea is to stop thinking within the constraints of your protected field and start communicating,” said Alan B. Lumsden, M.D., medical director of Houston Methodist DeBakey Heart & Vascular Center. “It’s about the transfer of knowledge between the energy world and the cardiovascular world, and more recently the aerospace world—there are some very concrete examples of that.”

Chronicling the history of Pumps and Pipes, affirmed Lumsden, ultimately begins with a vascular surgery device known as the Greenfield filter, which keeps a blood clot in the legs from traveling through the inferior vena cava and into the lungs.

“Lazar Greenfield, a trauma surgeon from Michigan, was having dinner with his next-door neighbor, an oil industry engineer named Garman Kimmel,” explained Lumsden, also co-founder and co-director of Pumps and Pipes. “Lazar was bemoaning the fact that a patient of his—a young trauma victim— had come in, was operated on, survived this major surgery, and then dropped dead three days later of a blood clot. Kimmel said that he needed to implant a filter in order to trap blood clots before they could reach the lungs.”

This casual conversation was a catalyst for developing the Greenfield filter, which is still in use to this day. “In the vascular surgery world, we were well aware of that example,” added Lumsden. “When I ended up coming down to Houston years ago, that was certainly on my mind.” On one of his flights out of Houston, Lumsden stumbled upon a similar chance encounter when he struck up a conversation with Zelijko Runje, a drilling engineer with ExxonMobil, about their respective professions. As the conversation continued, the heart surgeon and the engineer realized that both of their industries were, essentially, all about pumps and pipes.

The idea is to stop thinking within the constraints of your protected field and start communicating. It’s about the transfer of knowledge between the energy world and the cardiovascular world, and more recently the aerospace world—there are some very concrete examples of that. — Alan B. Lumsden, M.D., Medical Director of the Houston Methodist DeBakey Heart & Vascular Center

Lumsden believes that beneath the sheen of specialized verbiage, there are a lot of commonalities. “The oil and gas industry is involved in the flow assurance business—delivering a large volume of flow from point A to point B—which is exactly what we do on a daily basis,” he said. “If you look at what NASA does, they’re in the flow assurance business, too. While we’re dealing with blood circulation, the energy industry is navigating oil and gas production and the aerospace sector is maintaining fuel levels. We all image, navigate hollow tubes, and are interested in many similar emerging technologies, including robotics.”

After a mutual agreement between Houston Methodist DeBakey Heart & Vascular Center and ExxonMobil to continue the conversation, William E. Kline, Ph.D., manager of drilling and subsurface research for ExxonMobil Upstream Research Company, came on board. His involvement would lead to the founding of Pumps and Pipes.

“I was really invested in getting involved,” said Kline, a Pumps and Pipes co-founder. “Our research can always benefit from a bit of discovery of new things, and we also face some very similar problems to the medical industry. They might have some tools available that we can utilize.”

“What Pumps and Pipes gives us the opportunity to do is to look down into someone else’s toolkit and go, ‘What’s that?’ or ‘Have you ever thought about one of these?’” added Stephen R. Igo, codirector of Pumps and Pipes and director of the Entrepreneurial Institute at Houston Methodist DeBakey Heart & Vascular Center.

“The other guy’s toolkit is something that we emphasize over and over because that’s where the solution often resides—we just need that opportunity to network and bring people together to explore that.”

Far from a series of abstract discussions, these meetings have led to the emergence of new research ideas and concrete technological breakthroughs for all three industries. “ExxonMobil’s shareholder magazine published an article talking about using an MRI scan to understand flow characteristics at the bottom of a wellbore completion,” said Lumsden. “That same ability to create a controlled pumping system lets us print out an individual patient’s aortic valve—it isn’t just any aortic valve, this could be your aortic valve. Only after ExxonMobil saw how we look at cardiac function did they realize that they could use us to optimize a completed wellbore. Beyond that, those velocity maps could just as easily be a reading of what’s coming out of a space shuttle engine.”

“While there’s a portion of what we do that focuses on the title aspect of pumps and pipes—which we deal with in aerospace, as well—it’s gone much beyond that,” added Ellen Ochoa, Ph.D., director of Johnson Space Center as well as a former NASA astronaut. “We started a project to look at using microwave energy to perform no-drill dentistry to remove bacteria. That’s grown into a project with Methodist to look at how you might remove biofilm from in-site catheters without removing them.”

Since 2007, the Houston Methodist DeBakey Heart & Vascular Center and ExxonMobil, in conjunction with the University of Houston, and more recently, Johnson Space Center, have spearheaded the Pumps and Pipes symposium.

In the intervening seven years, the event has increased in scope exponentially, from a subdued conversation between participants in a conference room at the University of Houston, to a dynamic showcase of technological achievement and industry progress. This year, over 250 participants piled into the auditorium at the Houston Methodist Research Institute, bolstered by the more than 2,500 people tuning into the webcast from around the globe.

Before even entering the auditorium itself, attendees at the event—entitled Pumps and Pipes 8: Ideas to Insight—walked past a spacesuit standing sentinel at the building’s entrance, a da Vinci Surgical System flanking the doors to the auditorium itself, and caught a glimpse of various exhibit booths where guests would later mingle to discuss crossover technologies, business cards at the ready.

“This is really a platform about meeting people,” noted Lumsden. “It’s not just about sitting here and listening to us—it’s about taking some of these ideas from our presentations, talking to someone who’s outside of your usual comfort zone, and figuring out how to take their concepts and apply them to your industry.”

As for the presentations interspersed throughout the day, attendees had a wide range of material to absorb: a live transcatheter pulmonary valve replacement, a prospective outline of the InSight Lander Mission to Mars— which would place a lander on Mars, designed to drill beneath the surface and investigate the planet’s deep interior—and even a harrowing account of how Luca Parmitano, an Italian astronaut, nearly drowned during a 2013 spacewalk on the International Space Station when debris clogged a pump mechanism inside his spacesuit.

As the conference builds momentum with each passing year, approaching the limit of attendees who can be accommodated, organizers think there may be value in creating a not-for-profit with the ability to raise money to fund specific projects. In addition to acting as a catalyst for new technologies, the not-for-profit will emphasize influencing young people to pursue paths in science, technology, engineering and math.

“A couple of years ago, we realized how important this platform could be at inciting students to enter these fields, which are potentially dry subjects,” reflected Lumsden. “But when you look here and see what these engineers and researchers can do, it’s like magic. The magic show is not being done by sleight of hand, but due to a basic grounding and understanding of science and technology.”

“These three areas, in Houston, are world class—they’re the best in the world,” concluded Kline. “We’re the energy capital of the world, we’re certainly the cardiovascular capital of the world, and the home of manned space flight. Every one of us spends our days maintaining that excellence, and while it’s clear that staying in our world will keep us on the development track, true discovery absolutely needs to be cross disciplinary and broad. Getting together and discussing what we’ve learned is a very fruitful endeavor, and I think it’s the way that all technology has to proceed in the 21st century and beyond.”