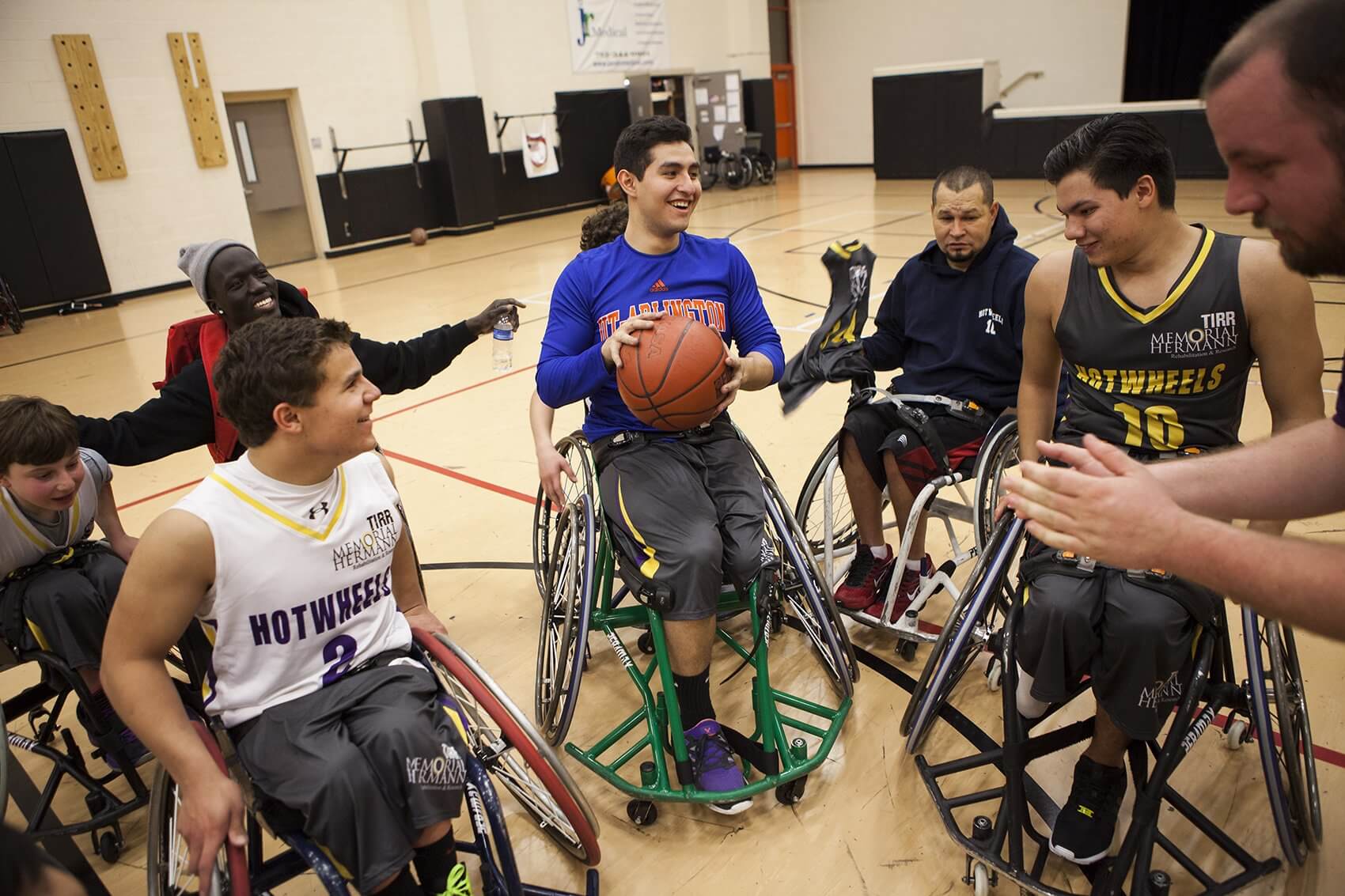 Every Tuesday night, the basketball court at the West Gray Metropolitan Multi-Service Center fills with the shouts of eager young athletes and the swish of baskets being made. But this isn’t your average practice. These are the TIRR Memorial Hermann Junior Hotwheels, the Houston area’s national championship-winning wheelchair basketball team. The players may come from different circumstances— some have been using wheelchairs their entire lives, while others have faced more recent challenges leading them to the bright gym on West Gray—but all prove having a physical disability does not eliminate the dream of seeking glory on the court.

Few young players exemplify the doors wheelchair basketball can open better than Fabian Romo. The senior at Elkins High School in Fort Bend has played with TIRR Memorial Hermann Hotwheels for the past three seasons. In that short amount of time, he rose through the ranks to become one of the team’s most formidable players. Though Romo is polite and soft-spoken off the court, he does not hold back on the court and has taken on a leadership role on the nationally top-ranked team. Romo’s qualities on and off the court caught the attention of the coaching staff at the University of Texas at Arlington (UTA), who signed Romo to their team, complete with a full scholarship.

“Fabian came here before he was on the [Hotwheels] roster, and I just noticed how he carried himself, how he presented himself. Those are the kind of off the court things that you want to see in your athletes,” said Doug Garner, coach of UTA’s Movin’ Mavs wheelchair basketball team. “The year after that, he actually was on the roster and started playing, and you could tell by watching him play that he put in the time outside practices and games to really develop. He developed very quickly.”

That dedication does not surprise anyone who knows Romo. A hardworking student who makes excellent grades, he plans to study biochemical engineering and would like to help make prosthetics once he graduates.

“You can always count on him. He’s a great young man,” said TIRR Memorial Hermann Hotwheels Coach Trice Ham. “I’ve met many of his teachers who all say he’s incredibly respectful and hardworking, diligent, all the things you want to hear.”

Prior to joining TIRR Memorial Hermann Hotwheels, Romo, who had his left leg amputated at four due to a birth defect, played able-bodied basketball wearing his prosthetic leg. After learning about the team during his freshman year of high school, he quickly fell in love with the sport, though there was a learning curve.

“It was a huge adjustment. I’m tall, and going down a little bit in height, it was weird,” Romo said. “I had to adjust my shot and everything and just being in a wheelchair you have to get adjusted to pushing, you get that row of blisters on your hand.” Soon enough, Romo became a key member of the team. His first season as an official member, the team won the national championship. That’s when Romo realized wheelchair basketball could be more than fun and games. It could become his ticket to the next level.

“It was my rookie year and if we could do this and if I was able to help out the team so much in just my first year, I thought, ‘Hey, if I develop myself more as a player and skill-wise as well, I could play in college,’” he said.

“I grew up thinking I’m not going to be able to do anything because of my disability, but then as I matured, I changed the way I view things. I was like, ‘I’m just like anybody else.” — Fabian Romo, High School Senior

Just a few short years later, Romo was being courted by the top college wheelchair basketball teams in the country.

“He was a five-star recruit, every program in the country wanted him,” said Ham. “That was a really cool thing, to see him get to experience the same kind of recruitment process you watch on ESPN for college football.”

Romo said the choice was always clear to him. Though he visited a number of campuses, UTA was the only one that really struck him as a place he could see himself spending the next four years. Even just being invited to visit campuses as an athletic recruit, however, was the realization of a dream that Romo once did not think was a possibility.

“I never thought I would be a college athlete and I’m grateful to have the opportunity,” he said. “I grew up thinking I’m not going to be able to do anything because of my disability, but then as I matured, I changed the way I view things. I was like, ‘I’m just like anybody else.’”

That change in attitude is one of the most important benefits teams like the TIRR Memorial Hermann Hotwheels offer young people with disabilities: the chance to believe in their own athletic prowess and potential, just like any other kid.

“Sports is sports,” said Garner, whose own son was born with a disability and played for the UTA team. “The fact that people with disabilities have the opportunity to reach their own human potential, whatever that is, through sport—I think it’s very important that those opportunities be out there.”

Romo is not the first player on the team to earn a college scholarship. In recent years, Ham said about half the players have been able to go on to play in college. But every story like Romo’s serves as motivation and inspiration for other players. “For the younger kids, it shows if you want to play wheelchair basketball in college, you can do that, too,” said Ava Skrabanek, adaptive sports coordinator at TIRR Memorial Hermann. “You can get signed and have the whole excitement and all of that. Just seeing somebody they know do that makes it more of a reality.”

As he excitedly prepares for the next step in his basketball career, Romo is happy to take on the responsibility of serving as a role model for the younger players and to offer words of encouragement.

“To anyone who is doubting themselves about fulfilling their dreams because of a disability, don’t let yourself get into that mentality,” he said. “Be optimistic about things in life, just have a positive mind, and that will get you very, very far.”