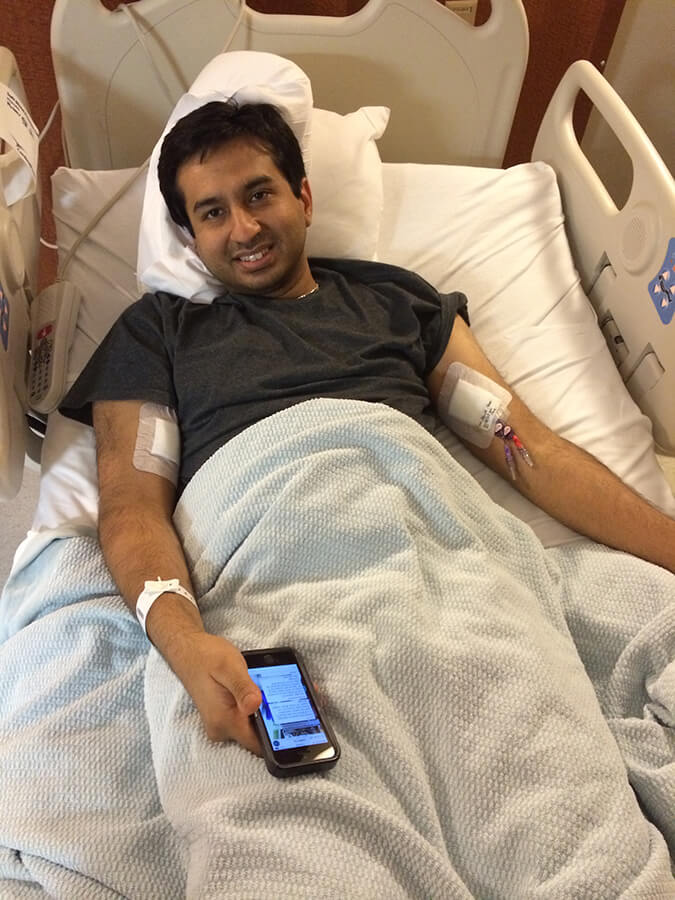 In March 2014, Nazish Sayed, M.D., Ph.D., was at the top of his game. Fresh off a postdoctoral fellowship at Stanford University, he had been working as an assistant member in the Department of Cardiovascular Sciences at Houston Methodist Research Institute since July 2013. Busy at work, and at home with his toddler daughter, Sayed never expected to be sidelined by a fight for his life.

“I had recently applied and was awarded a grant by the NIH,” said Sayed. “I went on a trip to India for a vacation for three weeks, came back and boom. That’s when I got sick.”

It seems counterintuitive—of all people, those working in medicine should be acutely aware of how vulnerable the human body is. And yet, preoccupied by his research in regenerative medicine, searching for ways to restore normalcy to cells, tissues, organs ravaged by illness, Sayed was shocked to become so ill himself.

“I was diagnosed with high-grade muscle invasive bladder cancer,” he said. “It kind of took me by surprise. I had no contributing factors, no family history of cancer, I’m still young. It was quite a traumatic and heartbreaking experience.”

Sayed sought care at The University of Texas MD Anderson Cancer Center under Ashish Kamat, M.D., Jennifer Wang, M.D., and Priya Rao, M.D., where he was told the cancer was high grade. Doctors recommended he immediately start chemotherapy. As he transitioned from researcher to patient, Sayed found solace in the story of David and Goliath.

“At that time I was David because I was a small person and cancer was this huge big monster who had just appeared in the valley,” he explained. “I thought, ‘I want to kick the butt of this cancer and I want to do it with the help of this medical center.’”

Just like Goliath, cancer seems big from a distance, but once its weaknesses are known, it can be defeated. As the old saying goes, doctors make the worst patients. But Sayed’s experiences raise the question: Can being a patient give a medical expert a new perspective on the world of medicine and a new outlook on future work?

“Seeing the medicine go into your body is just surreal,” said Sayed. “I have been on the other side and I now realize how immune I was at that time. I have treated patients with cancer back in India, but this gave me the perspective, as a patient, that it is a scary thing to lie down there and see these different color chemotherapy drugs going into your body.”

“Now I understand how the patients and the caregivers feel. What they go through. It’s totally different than what a physician or surgeon’s doing when you’re on the other side.” — Nazish Sayed, M.D., Ph.D., Assistant Member in the Department of Cardiovascular Sciences at Houston Methodist Research

That first round left Sayed feeling like he “was knocked out as if Muhammad Ali had punched me from both sides at the same time and squished me,” but just days later, he was ready to head back into the office, determined to distract himself by working harder than ever to expand upon the work he completed while in California.

“At Stanford, we published a paper in Cell where we showed that the innate immunity in our body that fights back against viruses and pathogens was actually making cells kind of vulnerable, allowing the cell to make a decision whether to either die—apoptosis—or try to adapt,” he explained. “We discovered if we try to put the cell into this vulnerable state we can reprogram the cell to our choice.”

Here in Houston, prior to his diagnosis, Sayed and his colleagues had been exploring how to take that research a few steps further.

“We wanted to see, ‘Can this be translated into a more clinical use?’” he said.

Sayed cited taking skin fibroblasts, or cells that cause scarring, and turning them into functional endothelial cells, which form a barrier between blood vessel walls and blood. Other researchers have generated endothelial cells by using infectious virus particles to instigate the process. Sayed and his colleagues were hoping to accomplish the same task by essentially tricking the cells into reacting as if attacked by a virus rather than actually introducing a virus. The benefit of being able to turn fibroblasts into vascular cells is we have ample skin cells, but cardiac cells damaged by a heart attack, for example, cannot be replaced.

“People who have peripheral artery disease or coronary artery disease, we could take their skin cells and convert them into endothelial cells or cardiac cells and then basically put them back into the person,” said Sayed. “We can provide functional cells from their own cells.”

As Sayed and his lab worked to coax those cells to transform, Sayed’s doctors were trying to eliminate the cancer from his body and bring him back to health. But treatment didn’t end with the fourth and final round of chemo. However debilitating chemo may have been, Sayed faced an even more daunting hurdle: surgery.

“I’m sitting with the doctor and he says, ‘Nazish, if you think chemo has affected you, you are wrong. If you were 100 percent before the chemo, the chemo brought you to 70 percent. But when you come out of surgery, you’re going to be down to 20 percent.’ That was scary,” said Sayed.

Sayed’s medical background gave him an advantage over most patients in terms of knowledge, but he soon found more information was not always helpful.

“I knew what I was jumping into— chemotherapy, the side effects, what surgery will bring about, the complications of surgery,” he said. “Was I happy that I had this knowledge? It was good because it prepared me well for the fight. But at the same time it scared me. It was a curse that I knew the consequences. A blessing and a curse.”

Like chemotherapy, surgery was another life-altering experience. Sayed recalled “Alice in Wonderland”— through the looking glass, he was now being wheeled into the operating room on a gurney, while he had formerly been the one pushing the gurney.

“I know saying goodbye to my wife and saying, ‘I’ll see you on the other side.’ Next, I remember waking up, saying, ‘There’s something in my back bothering me.’ That’s all I remember,” he said. “Now I understand how the patients and the caregivers feel. What they go through. It’s totally different than what a physician or surgeon’s doing when you’re on the other side.”

After five days at MD Anderson and a grueling five weeks of recovery time, Sayed headed back to work full time August 18 with a renewed sense of purpose. “Everything is totally worth it if I can see my daughter grow up and if I can do something in my medical field,” said Sayed. “I feel everything about the pain and the emotional stress, I can convert that disadvantage and turn it into an advantage. That is my goal.”

Sayed and his family moved from Sugar Land closer to the medical center, cutting down his commute so he could maximize his time with family and at work. In October, Sayed and his colleagues published their research regarding the transformation of skin fibroblasts into endothelial cells in Circulation. As the pain from surgery and chemo faded, the emotional toll lingered. At the suggestion of his grief counselor, Sayed kept a journal throughout treatment. Before becoming ill, “writing” meant research papers. Now he records his thoughts and feelings, often focused on sorting out the strange dichotomies that arise when doctor becomes patient.

His new perspective as a patient also had him reflecting on the emotional role a physician can provide for the patient.

“I don’t see patients anymore, because I’m focused on research. But if I was still seeing patients I’d be much more compassionate, much more understanding,” he said. “Nowadays it’s all about the patient comes in, you have 50 patients waiting outside, you want to quickly go through the physical. I yearned for encouragement when I was at MD Anderson, whether it came from a top surgeon or it came from someone passing by who just said, ‘You’ll be fine.’”

Sayed recalled the hug from a woman who cleans his office after he told her what he had been going through. Such simple gestures, like the words of encouragement from fellow patients at MD Anderson, have shown there is much more to medicine and cancer treatment than hard facts and science.

Sayed feels an increased drive to work harder than ever, but treatment also left him with emotional goals. His experiences inspired him to give back to patients going through similar ordeals. He is interested in publishing his journal, in the hopes that his candid writing about everything from the physical effects of treatment to the strain it can put on familial relationships will help others.

“There is light at the end of the tunnel. It doesn’t matter what age you are, how much trauma, what consequences you’re going through, it will be good at the end,” he said. “I was just a scientist, running a lab, doing my work, trying to publish papers, having a happy life. Then you get this news and it brings out a lot of things inside of you that you don’t even know exist.”

To read an excerpt from Dr. Sayed’s journal, click here.