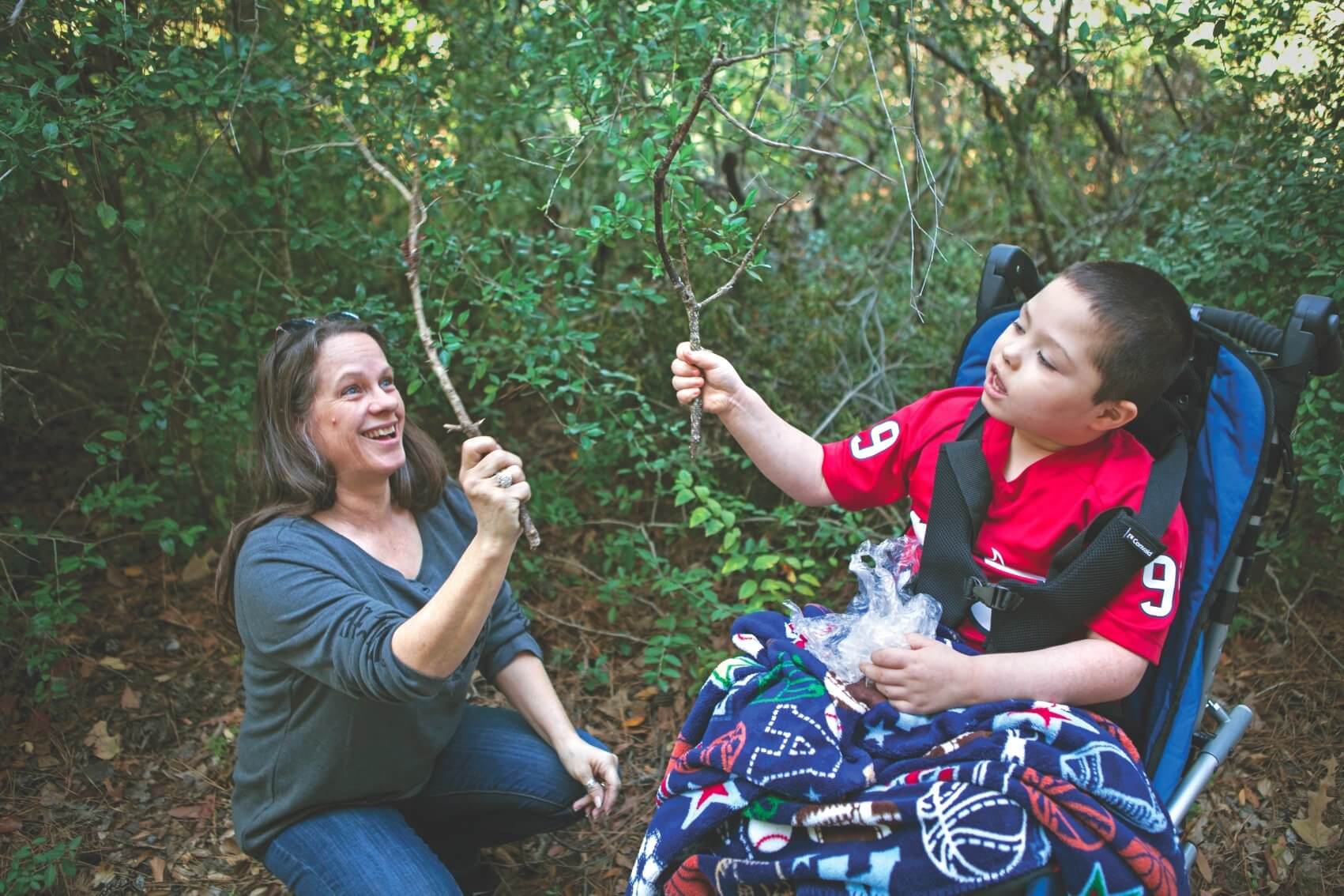 In many ways, Izaiah is a typical six-year-old. He loves football and his favorite team, the Houston Texans. When he meets you, he’ll give you a high five or a hug. He is quick to reach out his hand for a playful tickle. But since he was just two months old, he has suffered debilitating seizures. Things as simple as going outside on a hot and humid summer day or getting too excited over a big play on the gridiron can trigger them. Often they occur with no explanation or warning.

Izaiah has Dravet syndrome, a rare form of epilepsy that occurs in only one out of every 30,000 births. The genetic condition causes multiple types of seizures, from minor twitching lasting seconds, to a life-threatening condition known as status epilepticus – seizures that can sometimes last for hours. Izaiah has been known to suffer up to ten seizures in a single day.

Now a clinical trial at Texas Children’s Hospital is offering families like Izaiah’s hope for a better life. The trial involves a drug called Epidiolex, derived from marijuana plants. It comes in liquid form and the key ingredient is cannabidiol, or CBD, a chemical compound found in marijuana that has shown promise in treating patients with seizure disorders.

CBD oil is already used in Colorado, where marijuana is legal. The CBD-rich product comes from a strain of marijuana known as Charlotte’s Web, named after another child with Dravet syndrome who has seen enormous benefit from it. Once suffering 300 grand mal seizures a week, taking CBD reduced the frequency to two or three per month.

Charlotte’s success story has inspired a new kind of oil boom out west. Families are picking up their lives and moving to Colorado, hoping CBD could be the magic bullet their children need to stop the seizures. But there’s a flaw in this plan – the CBD accessible in Colorado has not undergone scientific testing and is unregulated.

“It’s not a pharmaceutical, so every batch of CBD extract could have a different concentration of CBD. Who knows what other contaminants are in it? And there are other components of the marijuana plant in it, it’s not pure CBD,” said Angus Wilfong, M.D., medical director of the Comprehensive Epilepsy Program at Texas Children’s Hospital and associate professor of pediatrics and neurology at Baylor College of Medicine.

Wilfong has been working with epilepsy patients for years. Among many accomplishments, he is responsible for developing a revolutionary MRI-guided laser brain surgery for patients with epilepsy that is now in use throughout the country. The stories of Charlotte’s Web caught the attention of Wilfong and his team. When a company in England called GW Pharmaceuticals developed the pharmaceutical-grade Epidiolex, they were eager to give it a try.

“When that product became available, my research team became very interested in getting access to it for some of our patients who are suffering desperately from epilepsy, because we knew that it was going to be pure CBD,” said Wilfong. “We know that if we give a child this formulation, it has exactly 100 milligrams of CBD in every milliliter and doesn’t have anything else in it. We know there’s no pesticide in it or other contaminants; it’s as pure as any other drug that’s on the U.S. market.”

“I said, ‘I want to try this. Anything to help him. Anything to have a normal life.’ I will stop the world and rearrange it to make sure we can get in the study.” — Lori Fountain, Izaiah’s grandmother

Becoming one of the ten official sites to test Epidiolex worldwide, however, was no easy feat, particularly given that medical marijuana is not legal at the federal level or at the state level in Texas. Representatives of the United States Drug Enforcement Administration interviewed Wilfong and toured his pharmacy. The Epidiolex itself must be kept inside a locked vault, to which only certain people have access.

“It’s a very, very rigorous process because marijuana and any derivative of marijuana is considered a Schedule 1 drug by the DEA and can’t be prescribed legally according to the federal government,” said Wilfong. “Only researchers can use it under very strict regulation and guidelines from the government.”

The trial at Texas Children’s is part of the very first worldwide research study on a medical marijuana product. The first stage, in which Izaiah is enrolled, is largely intended to figure out proper dosage. Thirty patients around the world, between the ages of four and ten, will be randomly assigned to different doses: a low dose, a medium dose, a high dose or a placebo. Once that round is complete, at the beginning of 2015 a second round will begin. Part B will cover a broader age range of two to 18 and an increased number of patients.

“We’re hopeful that after the scientific studies are done, we’ll show that it works for childhood epilepsy,” said Wilfong. “That it’s safe and doesn’t have abuse potential, and hopefully it will be taken off the Schedule 1 list.”

As Wilfong and his team fulfilled their obligations to the DEA and prepared to seek out patients to enroll, Izaiah’s grandmother, Lori Fountain, had been doing her own research regarding CBD.

“I belong to a Dravet support group, so I have read and seen everything about Charlotte’s Web, the CBD oil, and how it has helped some of these children,” said Fountain. “I’ve seen these children be able to function better, to speak where they didn’t have so many words before. They actually have words now, and sentences.”

After reading numerous success stories, Fountain and her family contemplated moving to Colorado to give CBD a try, she said, until they heard of the trial right in their own backyard at Texas Children’s. Fountain was instantly on board.

“I jumped. I said, ‘I want to try this. Anything to help him. Anything to have a normal life,’” said Fountain. “I will stop the world and rearrange it to make sure we can get in the study.”

Wilfong said her excitement is not unusual when it comes to CBD. People are “clamoring for it.”

“We’re really, really desperate for new treatments and so there’s been this groundswell of interest related to medical marijuana and derivatives of the marijuana plant,” he said.

Dravet syndrome is rare, but seizures and epilepsy are not. One in 10 people will have a seizure, and one in 100 have epilepsy. And while epilepsy is more common than Parkinson’s disease, multiple sclerosis and muscular dystrophy combined, there is still no fail-safe treatment.

These days Izaiah’s seizures are relatively under control, thanks to medication. He still has seizures, but nowhere near as many as he used to. That control, however, comes at a price. Fountain says side effects of the medication make him drowsy and glassy-eyed.

“I don’t see the brightness in his eyes that some children have,” she said. “He always looks like he’s just tired and I would like to see that look go away.”

The prevalence of seizure disorders, combined with a frustrating lack of options in some severe cases has made Colorado a popular place in the last couple of years, but the results of CBD consumption are still mixed. The treatment has been a great success for some, while others haven’t benefited at all. Given the lack of regulation in Colorado, however, a scientifically sound clinical trial using the pharmaceutical-grade Epidiolex is vital for determining the efficacy of CBD treatment.

Wilfong’s team has already seen some success with Epidiolex. The first patient began taking it six months ago and has experienced significant improvement.

“He was having over 200 seizures a day,” said Wilfong. “I just saw him in the clinic very recently and he’s having one to seven seizures a day now.” Though promising, Wilfong cautions the full clinical trial must be complete before drawing any credible conclusions.

“We believe it was due to the CBD, but it’s not proof,” he said. “The only way you can prove something works is to study it in a scientific, controlled study.”

Still, for Fountain, any news of success brings a glimmer of hope for Izaiah. Because of his condition, Fountain spends nearly every waking moment with her grandson. She is by his side at school every day, and she sleeps in his room every night. She is fiercely protective of Izaiah, and has an answer for anyone who questions using a medicine derived from marijuana.

“There are some people that have not been so nice about it and I’ve asked them to please come to spend a day in my shoes. Just one day,” she said. “Please come spend one day in my shoes and then tell me that you wouldn’t do everything you could possibly for your child.”

The stigma against marijuana has been an obstacle to researching drugs derived from the plant. Fountain and Wilfong are both quick to point out Epidiolex does not contain any tetrahydrocannabinol, or THC, the compound in marijuana that gives users a high.

“The THC is what gets you high. The CBD does not,” Fountain said. “I don’t want to get my grandson high. That’s not the point.”

The point of taking part in this study, Fountain’s greatest wish, is simple: to give her grandson a normal childhood. Ask her to talk about him and her voice immediately softens; her devotion to Izaiah is clear.

“Every day that we wake up is a good day, because that means he’s in my life one more day. He could have that one seizure that could kill him, and that’s on a daily basis. We live with that reality every day,” she said. “I just want to give my little boy a normal kind of life. He may not make it to be a teenager. He may not make it to be an adult. But to be able to give him a quality life, to be a normal little child as best as he can be with Dravet syndrome would be priceless.”