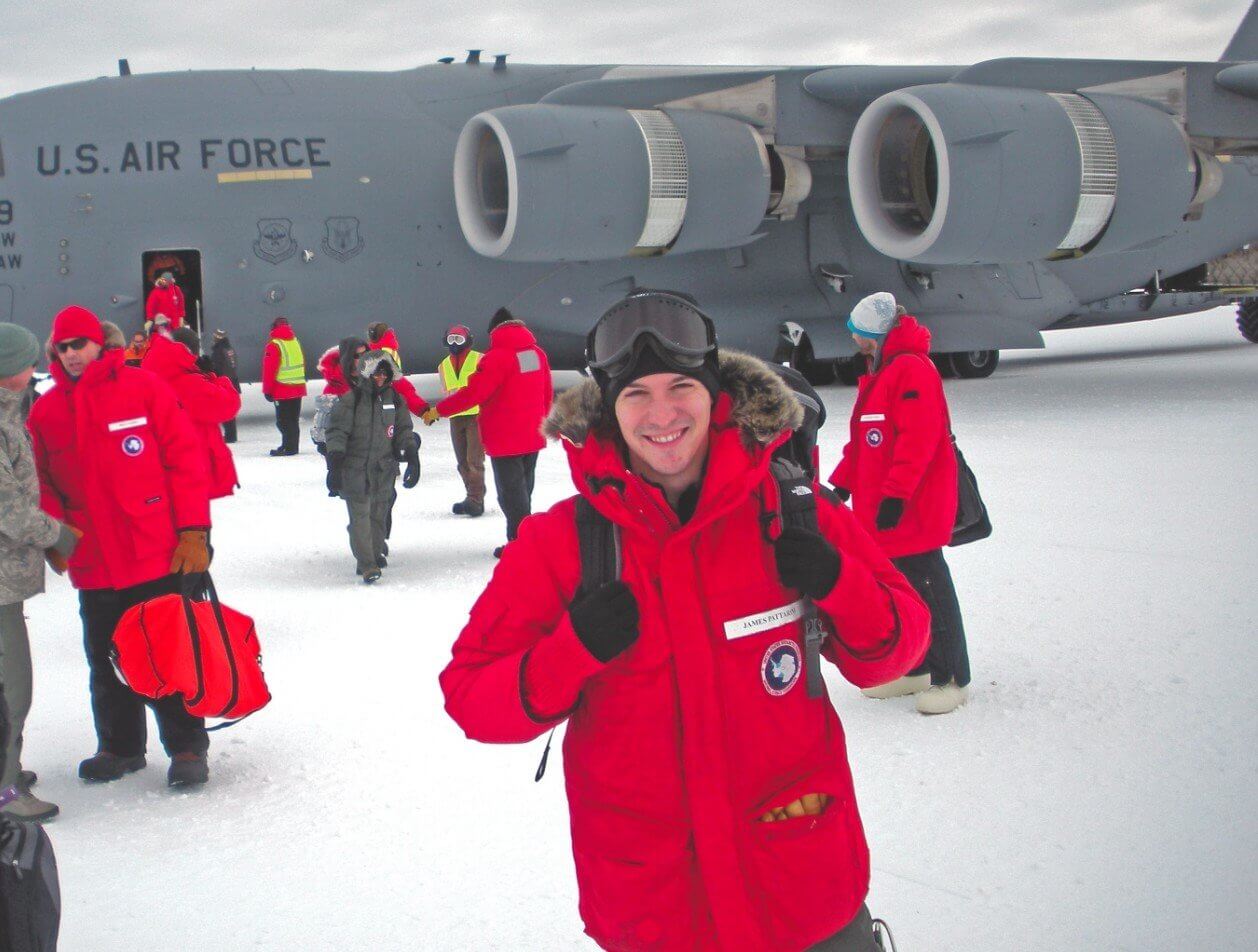 When James Pattarini, M.D., MPH, an aerospace medicine resident at The University of Texas Medical Branch at Galveston (UTMB), stepped out of his Boeing C-17 transport plane and felt the crunch of Antarctic snow beneath his boots, he was blinded. As the sun reflected sharply off the blank canvas of snow extending in all directions, Pattarini struggled to pick out discernible shapes in the distance.

“My very first thought was, ‘This is so bright,’” he laughed. “Before we got out of the plane, they told us that we might want to put on sunglasses if we’re not wearing goggles. I thought, ‘Huh, that’s kind of a funny thing to say,’ but we walked out and my eyes were trying to pick out distinct shapes when I realized that there are no features. All I could see was people in bright red jackets, just like me. It looked like it could be the afterlife—just white and bright.

“But then your eyes adjust and you realize that there are actually a lot of features on the horizon,” he added. “We’re actually within visual range of a volcano, Mount Erebus, and it’s got a little bit of smoke coming out of it right now. You see that, when you land and your eyes adjust, and that’s pretty cool—you even see the mountain ranges in the distance.”

Pattarini’s excursion to our planet’s southernmost continent, a place so alien and unyielding that it’s considered analogous to the environment of space, is part of a clinical rotation for the UTMB Health/NASA Aerospace Medicine Residency Program. Designed to prepare physicians in aviation and space medicine, space biomedical research, aerospace medicine and manned space flight, the program doesn’t shy away from experiential learning.

“Our goal is to train physicians who already have clinical training—for instance someone who has a background in internal medicine, family medicine, or any kind of specialist from psychology to neurology,” explained Tarah Castleberry, DO, MPH, director of the UTMB Aerospace Medicine Residency Program. “We take these doctors and train them to work with patients that live and work in aviation and space environments.”

“It’s a very small but really unique and exciting field where you combine a lot of both medical and nonmedical skills to care for the aviator,” added Natacha Chough, M.D., MPH, who will serve on the ice in January and February 2015. “All of us come from a pretty broad foundation, and when we train in this secondary specialty of aerospace medicine, we have to integrate our medical knowledge with a lot of components, such as working in extreme environments, interfacing with engineers and hardware, and the politics of space flight from funding to management—even the organization of the mission as a whole. It really challenges me to think about everything from a big picture standpoint while also having to care for the patient.”

“Before I came to Antarctica, I was flying in formation flight with retired Air Force pilots and I was being trained alongside Air Force flight surgeons even though I’m a civilian. And then they sent me to the bottom of the world, in an environment that’s going to give me memories that I will have until the day I die.” — James Pattarini, M.D., MPH, aerospace medicine resident at The University of Texas Medical Branch at Galveston

Chough is on the more traditional track for aerospace residents—she has already completed a residency in emergency medicine and has earned a master’s degree in public health during her two-year residency in aerospace medicine. Pattarini, who touched down at McMurdo Station, Antarctica on Monday, November 3rd, is in a combined program, which takes four years. He is combining his internal medicine residency with an aerospace residency and also earned a master’s degree in public health. Both doctors will complete their training in June 2015.

“This program is a really exciting opportunity for our residents to practice in a real analogue environment, very similar to the types of places that astronaut patients would be living and working in,” reflected Scott Parazynski, M.D., former chief medical officer and director of the Center for Polar Medical Operations (CPMO) at UTMB. “They’ll be in the direct line of fire, taking care of scientists and researchers and technicians who live and operate at those bases. It’s an opportunity to work in a remote field station and get a feel for how deep space exploration might want to prepare itself.”

“Practicing medicine down here is so different,” admitted Pattarini. “An obvious, off-the-cuff thing is that for basic blood work, we’re doing it ourselves— there is no such thing as sending it to the lab and having them send it back. You’re going to draw the blood, take it into the back room, boot up the machine, load it in the cartridge, and then run it yourself and wait for the results to spit out. There’s no middleman.”

In addition to the lack of a traditional support structure—nursing staff is present, but they’re often busy seeing their own patients—clinicians are also forced to take innovative approaches to standard problems.

“I’ve done five ultrasounds in the last 24 hours, which is unusual—I’m used to occasionally doing ultrasounds in internal medicine, but it’s one of many options when you’re in a modern medical facility,”

said Pattarini. “Here if anyone comes in with anything from belly pain to shoulder pain, they’re getting an ultrasound. That’s because it’s literally the only imaging modality that we have, with the exception of a plain film x-ray.

“Because you know that you’re limited, you make decisions that you maybe wouldn’t make back home,” he added. “You’re also aware that there are very big consequences for the decisions that you make. If I’m adamant that I want a CT scan, that means mobilizing the Air Force to evacuate someone to Christchurch, New Zealand, which means putting together a crew. Every time you fly there’s a little bit of risk and every time you fly in bad weather there’s a little additional risk. Our responsibility extends beyond the risk to the patient—it encompasses the risk to our emergency responders and aircrews in the event that an emergency evacuation is called for.”

While Pattarini is spending the majority of his six-week rotation at McMurdo General Hospital, the largest medical facility in Antarctica, he’ll be making short sojourns to field camps, as well as a longer stay at the Amundsen-Scott South Pole Station—a U.S. scientific research station, it is the southernmost location on Earth.

“I’m most excited about going out to these field camps,” said Pattarini. “Right now, McMurdo has a population of around 1,000, and there are a couple hundred people at the South Pole, but some of these field camps are locations that only a couple hundred people in the world have ever been to. When I go, I won’t be taking anything other than a few bags of saline, my stethoscope, and a handful of emergency drugs.”

That flexibility in navigating clinical problems with limited resources may prove invaluable in the future. UTMB aerospace residents are involved with research on the effects of space flight on average people, a new frontier in medicine as commercial launches approach reality.

“Before I came to Antarctica, I was flying in formation flight with retired Air Force pilots and I was being trained alongside Air Force flight surgeons even though I’m a civilian,” related Pattarini. “And then they sent me to the bottom of the world, in an environment that’s going to give me memories that I will have until the day I die. Before that, I was sitting and doing console training at mission control at Johnson Space Center. I can’t imagine another job on Earth that would let me do those things—that’s only possible because I came here to UTMB.”