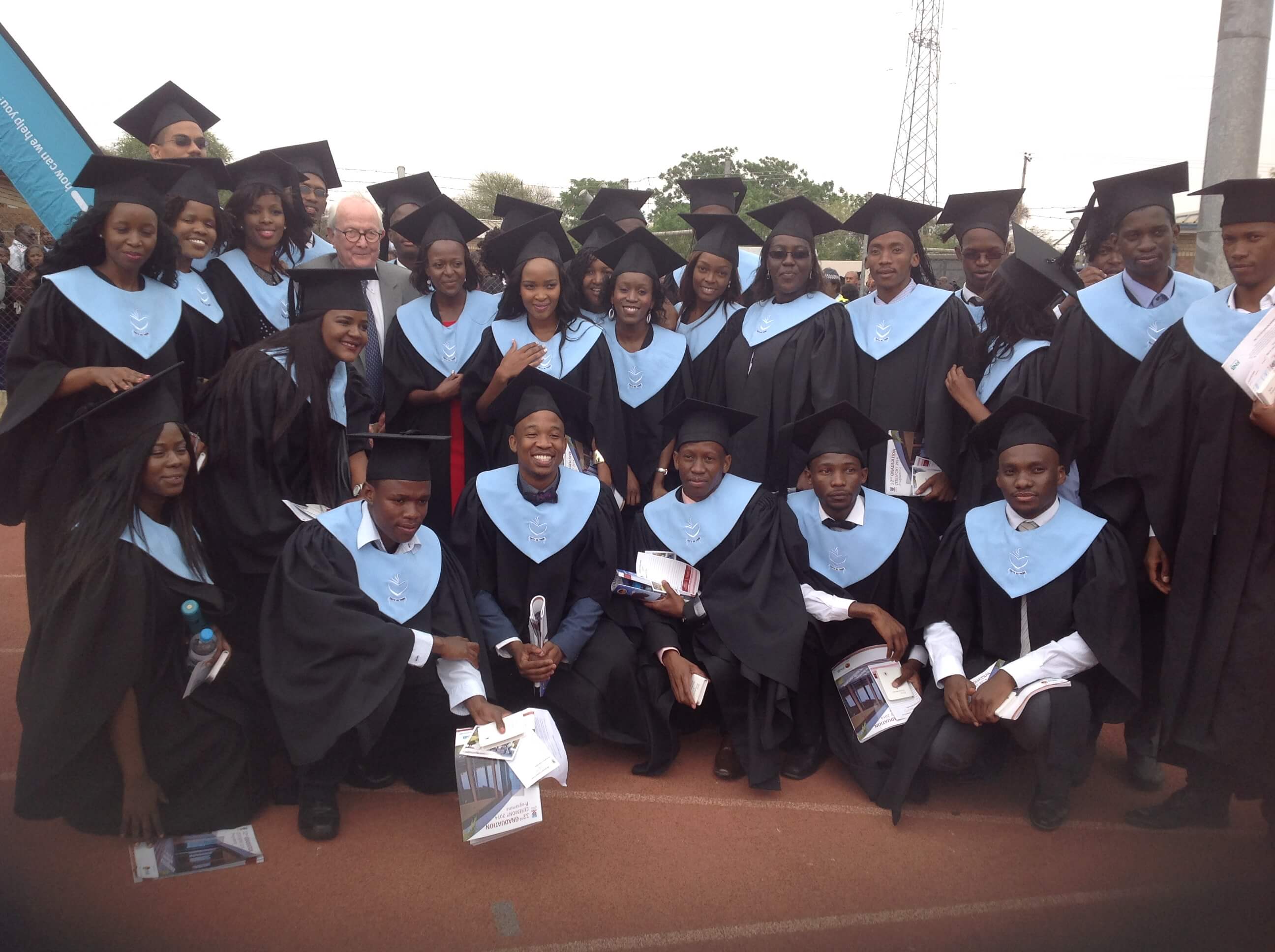 The 3 1/2 years that Major Bradshaw, M.D., spent in Botswana in southern Africa is sure to have a lasting benefit for the people of the country for years to come, and that impact is starting to be seen.

Bradshaw, previously dean of student affairs and education and senior vice president at Baylor College of Medicine and currently physician advisor to the Office of Philanthropy and Alumni Relations, served as founding dean of the first medical school in the country. His work and the work of countless others came to fruition as the first group of medical students graduated from the University of Botswana School of Medicine this October.

Bradshaw and his wife, Susan, recently traveled back to Botswana for the commencement ceremonies, where they reunited with colleagues and the graduating medical students, whom they first met when the students were about 18 years old and premeds.

“It was a very personal thing for both of us to be back there. A lot of our lives and efforts have gone into creating that medical school, and there were a lot of ups and downs,” said Bradshaw. “It was very fulfilling to see it get to the point where it really happened, where they’re really graduating and that the medical school is there and still functioning and gradually getting better. At this point, it’s there to stay.”

It was important to establish a medical school there because of the “brain drain” in the country. Since 1971, the government of Botswana has sent students around the world to study medicine – somewhere between 2,500 and 3,000 were sent abroad, but only about 91 came back.

Development of the medical school started when Mark Kline, M.D., J.S. Abercrombie Professor and Chair of Pediatrics and physician-in-chief at Texas Children’s Hospital, established the Botswana-Baylor Children’s Clinical Center of Excellence in 2003. The Center provides care and treatment for HIV-infected children and families from around Botswana. At that time, the country had one of the highest rates of HIV in the world and no medical school to train doctors to provide care to these patients and many others. Around this time, Baylor also signed a Memorandum of Understanding with the University of Botswana to provide consulting services.

When Kline returned from a trip to Botswana in April 2006 and asked Bradshaw if he knew someone who would want to travel to Botswana to help establish the country’s first medical school, Bradshaw said he knew just the person for the job – himself.

Two months later, Bradshaw and his wife moved to Botswana, where he was the only faculty member for the medical school for one year. Because of the MOU, Bradshaw was able to maintain his role as a faculty member at Baylor while in Botswana.

“They’ll be real leaders in Botswana because of their education and their position, and I think they will have an impact beyond just the practice of medicine.” — Major Bradshaw, M.D., founding dean of Botswana’s first medical school

In many places outside of the United States, students enter medical school straight out of high school and train for six years. This would be the case in Botswana. The first class was selected after one year of premed work at the University. Bradshaw noted that because of the young age of the students, there was a heavy emphasis on ethics, professionalism and communication early in their medical training. Two years of training were heavily focused on problem-based learning in the basic sciences, which was followed by three additional years of clinical training.

The curriculum also devoted a significant amount of time training in surgery, because once these students complete their training, they can be sent to a small village, where they are likely to be the only physician available for hundreds of miles and must be able to perform a variety of medical care.

“In true Baylor style, we started in a remodeled warehouse,” said Bradshaw, referring to Baylor’s early years in Houston where classes were held in a converted Sears, Roebuck & Co. building.

Bradshaw worked with architects to build a basic science building as well as a 450-bed, 800,000 square foot academic hospital.

He emphasized when developing the curriculum that if they wanted people to stay and practice in Botswana, they needed to have residency programs in the country. Internal medicine, pediatrics, family medicine, general surgery, obstetrics and gynecology and emergency medicine residencies have been established.

Currently, there are 250 students enrolled in the medical school, which has been elevated to the Faculty of Medicine within the University of Botswana rather than being a part of the Faculty of Health Sciences.

Thirty-two of the 36 students from the original medical school class graduated this fall, and although the other four were delayed for various reasons, they will graduate. All graduates are doing internships in Botswana, after which they will choose to stay or leave for residency.

“It will benefit the people of Botswana in the long run because I really think that the majority of these young people are going to stay,” said Bradshaw. “The people of Botswana in general love their country. They are attached to the land, their families and to their cattle; it’s just a culture of wonderful people. The education environment is there now, so those students can see opportunities.

“We had a gala dinner the Thursday night before graduation, and I told the students that they are going to be caring, compassionate, excellent physicians and clinicians and also that they’re going to be leaders in their community and in the nation,” he continued. “They’ll be real leaders in Botswana because of their education and their position, and I think they will have an impact beyond just the practice of medicine.”

At the commencement ceremony, the vice chancellor of the University of Botswana recognized that the first graduating medical school class was a major milestone in the development of the country. He also recognized Bradshaw and Baylor’s contributions in establishing the medical school.

The Bradshaws remained in Botswana until December 2009 and visited again in 2010 and 2012 and for the commencement ceremony this October, but their impact and their memories in Botswana will last a lifetime.