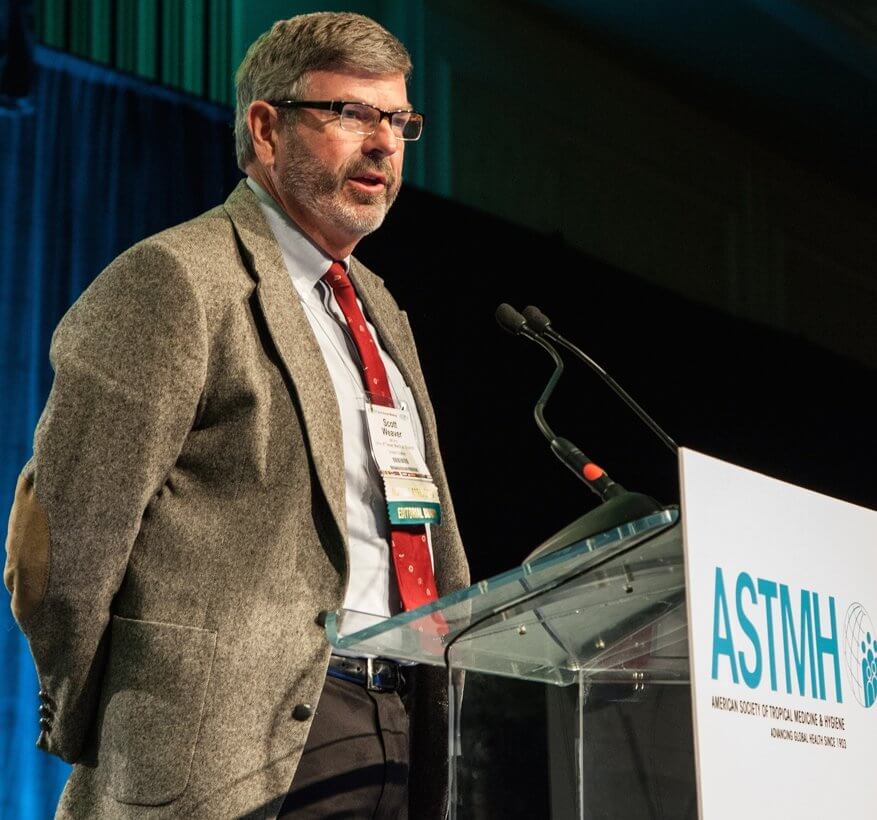 Scientists at the University of Texas Medical Branch (UTMB) were recognized with prestigious awards for their contributions in research at the annual American Society of Tropical Medicine and Hygiene meeting. The meeting, held this year in New Orleans, featured several UTMB researchers presenting their latest findings on topics as varied as Ebola to mosquito-borne diseases.

Scott Weaver, M.S., Ph.D., was presented the 2014 Walter Reed Medal in recognition of his distinguished accomplishments in the field of tropical medicine. Weaver is an internationally recognized virologist and vector biologist who has made several important contributions to the understanding and control of tropical diseases. His work has been widely published and he holds five patents in vaccine development. He is the co-chairman for the Global Virus Network’s Chikungunya Task Force, which formed to speed the process of creating vaccines and much-needed diagnostic tools for this virus. Chikungunya has been identified in dozens of countries across Asia, Europe, Africa, and is now spreading in the Americas.

Slobodan Paessler is the recipient of the 2014 Bailey K. Ashford Medal awarded annually for distinguished work in tropical medicine by an early- or mid-career member of the society who has made outstanding contributions to the field. Paessler is internationally known for his research in the fields of viral diseases, vaccine and antiviral drug development.

UTMB has one of the most comprehensive university-based vaccine development programs in the world. Paessler’s main research interest is in understanding the mechanisms by which emerging RNA viruses cause encephalitis, hemorrhagic fever or respiratory diseases. Paessler is the co-principal investigator, in collaboration with the Seattle-based biotechnology company Etubics Corporation, on a recently awarded $4.4 million grant from the National Institute of Allergy and Infectious Diseases. The goal of this grant is to construct, produce and test a vaccine containing various antigens of influenza. If successful, clinicians could have an influenza vaccine that recognizes all influenza viruses, not just a single type, ready for patients within five years.

The tropical medicine society is a global organization of scientists, clinicians and program professionals whose mission is to promote global health through the prevention and control of infectious and other diseases that disproportionately afflict the poor. Research, health care and education are the central activities of its members, whose work bridges basic laboratory research to international fieldwork and clinics to countrywide programs.