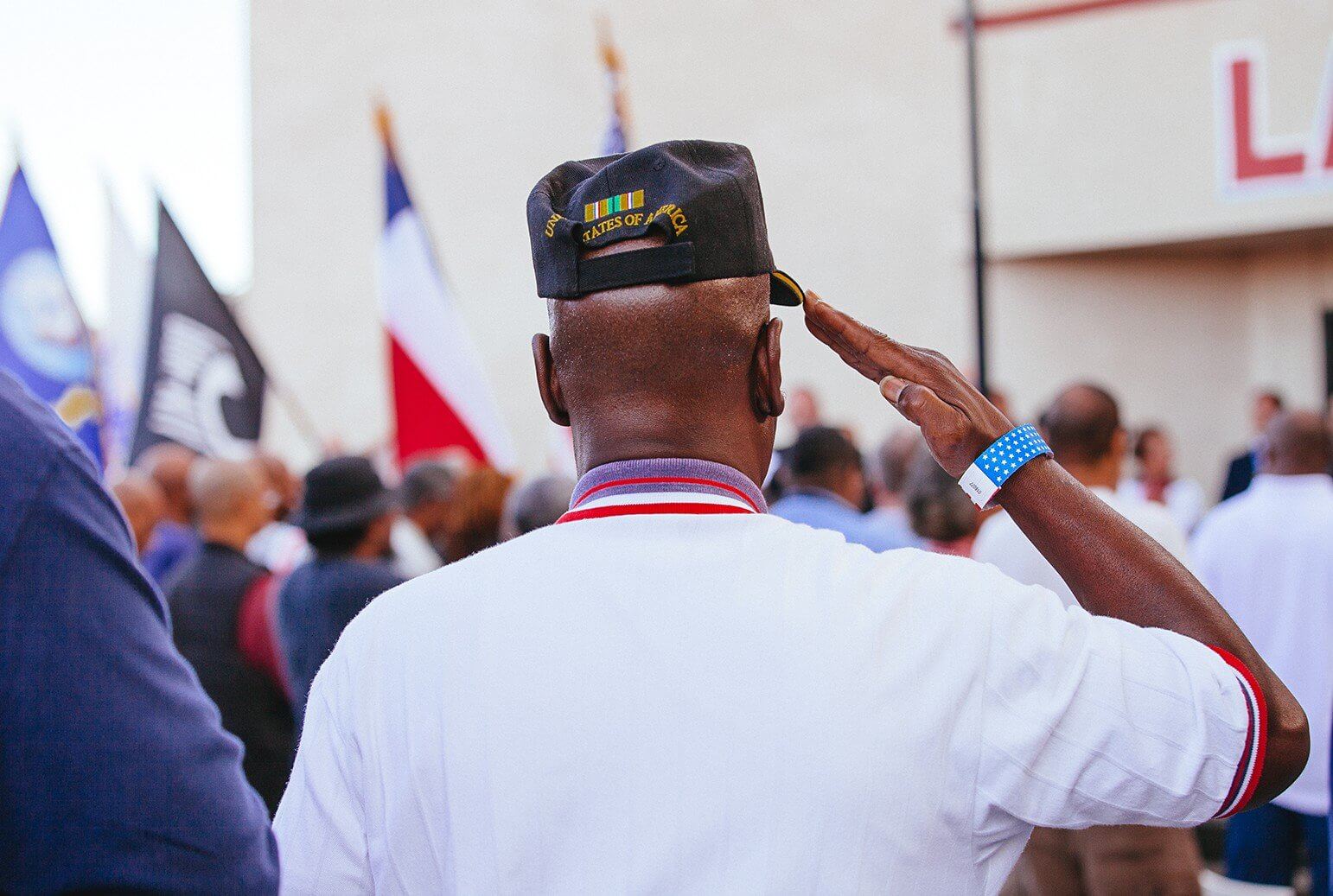 The neighborhoods surrounding the Latino Learning Center were packed with cars Oct. 3— a bumper-to-bumper show of support for the city’s annual Stand Down for Homeless Veterans. A torrential downpour drenched the area overnight, but skies were blue and the morning had turned crisp and clear by the opening ceremony.

During times of war, a “stand down” offers soldiers a break from battle and an opportunity to recuperate. Since the very first Stand Down for Homeless Veterans was held in San Diego, California, in 1988, these events have performed a similar function for veterans struggling to transition back into civilian life, giving them access to medical screening and care, housing and career assistance, and more, all in one location.

This year’s Stand Down marked the 14th held in Houston and was named Camp Hatcher after the late Earl Hatcher, a longtime advocate for the homeless and a former executive director of the Housing Corporation of Greater Houston. Hatcher was described in the dedication as “relentless in his efforts to help the homeless restore their lives.”

The backdrop for this year’s event was a bit different than in years past. Thanks to renovations at its usual location, Emancipation Park, the Stand Down itself was briefly homeless until the Latino Learning Center stepped up to host. And so the day began with an opening ceremony on the center’s front steps, as a color guard composed of veterans presented flags from each military branch. Loud cheers from the audience announced how many Army, Navy, Air Force, Marine and Coast Guard veterans were present, a reminder of the work that needed to be done.

“This is an opportunity for veterans to access a wide variety of services at one convenient location, and to create a plan to get back on their feet,” said Adam Walmus, director of the Michael E. DeBakey Veterans Affairs Medical Center Houston. “I think we can all agree that the word ‘homeless’ and the word ‘veteran’ should never be together in the same sentence. When even one of our nation’s heroes spends a night on the streets without hope, permanent housing or food, we know we have work to do.”

And work they did. Outside, veterans were given free flu shots and medical screenings. Inside, the center was packed from wall to wall with volunteers and booths. A computer lab in one corner held a workshop for retooling resumes. A room full of clothing helped job-seeking veterans find the perfect ensemble to impress potential employers.

The common theme throughout the room was veterans helping veterans. A significant number of volunteers and service providers were veterans themselves, like David Leamon, managing attorney of the military and veterans unit at Lonestar Legal Aid.

“They’re definitely an underserved legal community, and all of us being veterans certainly have personal affinities with the veteran community,” said Leamon. “A lot of the veterans face legal issues, particularly when it comes to VA benefits, that are niche legal areas…We’re trying to provide those services.”

Career transition manager Pat Snow recently retired after 30 years in the Air Force. He manned a booth for the Lonestar Veterans Association, which assists post-9/11 veterans in making a successful switch from soldier to civilian.

“We provide peer-to-peer mentoring, where veterans that have been there before help those who are coming back,” said Snow. “It’s important that we take care of our veterans. They’ve taken care of us, they’ve protected our freedoms so it’s time that we help our veterans out.”

Often that help must start on the inside, by addressing mental health issues, said Laura Marsh, M.D., director of the Mental Health Care Line at the Veterans Affairs Medical Center Houston. “We must recognize that mental health is something we value and need, and support those people—especially veterans—who struggle with those issues,” she said. “In order to address mental health issues, a person most often needs treatment; treatment works, but the person has to engage in that treatment.”

Nearly 25 percent of the United States’ homeless population are veterans, Marsh said. Many of them face significant obstacles as they try to reintegrate to civilian life, including post-traumatic stress disorder, depression, anxiety, substance abuse issues and traumatic brain injuries, all of which have an impact on a person’s ability to adjust to daily life outside the military.

For some, even reaching out for help can be a struggle. “Our system often sends the homeless person shuffling from place to place, from here to there,” said Marsh. “If they have to be someplace at 3:00 to have a place to sleep, but they can’t get that appointment for a job until 2:45, they are in a quandary and ask, ‘OK, what am I going to do?’ They’re really living moment to moment.” The ability to fulfill multiple needs at once is exactly what makes the Stand Down so valuable for Houston’s veterans, she added.

At the beginning of 2014, the U.S. Department of Housing and Urban Development estimated around 49,933 veterans are homeless in the United States. That number represents a decline of nearly 33 percent since 2010. Bringing an end to homelessness in veterans has been a goal in the city of Houston for years. The Housing Houston’s Heroes program successfully housed 101 veterans in 100 days in 2012 and has since helped many more get back on their feet. Just this past spring, the Obama administration launched the “Mayor’s Challenge to End Veteran Homelessness,” in which Houston Mayor Annise Parker has been heavily involved.

The battle against veteran homelessness is far from over, but initiatives like the Stand Down are valuable tools in the fight. One of the highlights of this year’s event came from a beneficiary of the 2013 Stand Down. Yushana Roettenbacher, an Army veteran, spoke of how her life has changed over the past year. The struggles she faced after leaving the Army are likely familiar to many veterans.

“When the time came around for me to get out [of the military],” said Roettenbacher, “I found myself at the airport with no place to go.” She drove from state to state looking for housing and searching for a job. She lived in her car, traveling all the way from Florida to Oregon until finally arriving in Houston last year. Once here, she was advised to attend the 2013 Stand Down.

“When I went to the Stand Down, my only thought was, ‘Are there going to be free bathrooms?’” she joked. But when Roettenbacher followed up with some of the connections she made at the event, her life started falling into place.

“I went to Career and Recovery Center, and the next day, I had a job,” said Roettenbacher. “That is the God’s honest truth, it was so weird. I really wasn’t expecting that.” She went on to become certified as a dog groomer and now has her own grooming business.

Roettenbacher’s success story is just one of many, according to Quindola Crowley, chief of social work at the VA Medical Center. “The Stand Downs are working and the work that we do throughout the year is helping veterans,” she said, noting she believed this year’s Stand Down had fewer veteran attendees than the last. “When we reach that goal of having more vendors than veterans, we’ve reached our goal of serving homeless veterans.”