A Playground of Possibility

A Playground of Possibility 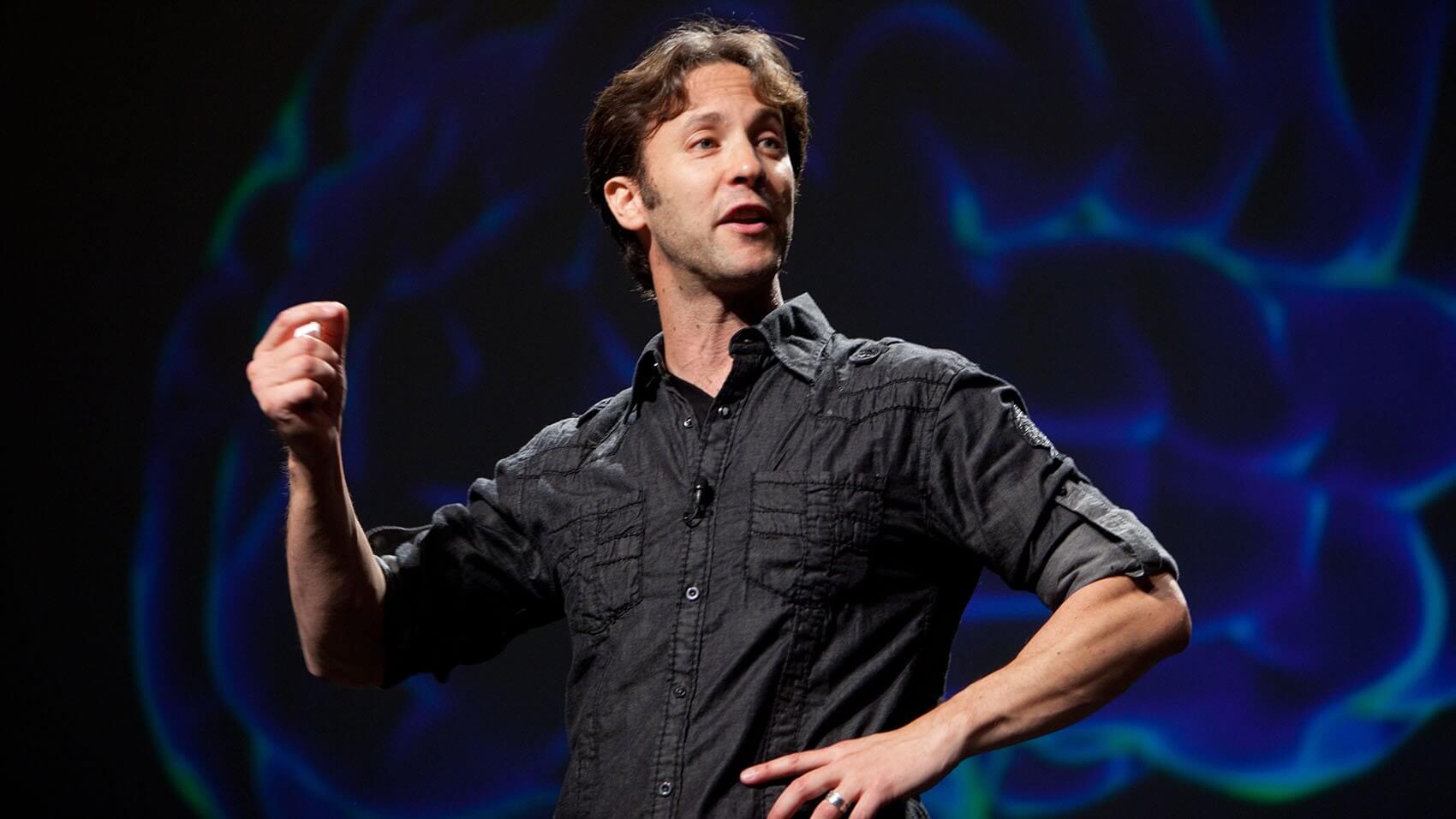 Walking through the doors of the Laboratory for Perception and Action, located on the ground floor of Baylor College of Medicine, it becomes clear that, at least in the realm of laboratory space, one is not in Kansas, anymore. A manic fusion of creative energy and the boundless nature of scientific discovery, the workplace of neuroscientist David M. Eagleman, Ph.D., radiates a vibrant sense of controlled chaos. The dry-erase walls, a surface for scientific free play that run from floor to ceiling, are augmented with everything from equations and graphs to summarizations of complex principles and sketches of brain activity. Students and postdoctoral researchers chat animatedly, working to understand the neuro-biological basis behind questions that most people ruminate on while gazing up at the stars or sitting in a philosophy class. Who are we? What is the nature of reality and perception? Why do we think and behave the way that we do? For Eagleman, those are the questions worth answering.

“At some point, I came to realize that if we want to understand the big questions, all of those philosophical musings boil down to a single, three-pound organ that I could devote my career to studying,” said Eagleman, who directs the Laboratory for Perception and Action at Baylor, where he also directs the Initiative on Neuroscience and Law. “My lab is all about understanding how brains construct reality. Our subject is the human brain, and we try to answer our questions using the full armamentarium of modern neuroscience. We try to figure out how people perceive the world, why and how they hold certain types of beliefs, and how reality can be different for different people.”

Propelled by that desire for understanding, Eagleman’s lab has several research thrusts, centered on unraveling the mechanisms behind the various ways our brains construct perception. Time perception, a topic that has fascinated Eagleman since childhood, is woven into the fabric of many of his professional pursuits.

“Early in my research career, I realized that even though we think of time as flowing like a river, subjective time can be easily manipulated. In the laboratory, we can make you think something lasts shorter or longer than it actually does, or that one thing came before something else, even though it was the other way around,” he said. “Your perception of time is a construction of your brain. The brain is locked in silence and darkness inside the skull, so all you ever experience is what it thinks is going on.”

While investigating the underlying physical characteristics of time perception and how they manifest neurobiologically, Eagleman’s unusual scientific path led him to a hypothesis that he never would have discovered otherwise—one with a potential multibillion-dollar impact on the life science community. “I think that schizophrenia might fundamentally be a disorder of time perception,” he said. “If you’re not getting the perception of time correct, you’re going to have a fragmented cognition. And this could be the explanation for many of the features of schizophrenia, such as credit misattribution and auditory hallucinations. We’ve begun testing time perception issues with schizophrenic patients, and everything we’ve found so far is consistent with that hypothesis.”

While Eagleman and his colleagues are still taking their first steps down a long research road, if that idea turns out to be a correct interpretation of the basis of schizophrenia, it suggests entirely new rehabilitative strategies. “Instead of doing a shotgun approach with pharmaceutical drugs, we could have someone play a video game to train up their sense of timing,” he noted. “This approach is hypothetical at the moment, but it’s a game changer if it’s accurate. Schizophrenia might be an example of what happens when these very complex mechanisms that we have for constructing time go wrong.”

That malleability in going against the grain of conventional knowledge has served Eagleman well in another of his pursuits: sensory substitution. A non-invasive technique for circumventing the loss of one sense by feeding its information through another channel, sensory substitution is based on the idea that the brain doesn’t differentiate which conduit it receives information through. “I’m interested in the flexibility of the brain, in terms of the data that it can take in,” said Eagleman. “We’re very used to our eyes, ears, fingertips and nose and so on because these are the sensors that we’ve inherited through evolution. So we tend to think of them as being fundamental. But the brain is so flexible that you can feed in new kinds of senses.”

Following that line of thinking, Eagleman and one his graduate students, Scott Novich, developed a non-invasive, low-cost solution: a vest with several small vibratory motors that can be worn under the clothing. With the help of a cell phone, sound is converted into patterns of vibration on the torso. And that allows those with deafness to perceive auditory information through their skin.

“Through these patterns, they can come to understand the sounds out there,” explained Eagleman. “We’re still at the foot of the mountain with this line of research—this week we’re finishing testing our third deaf participant—but it looks like the idea is going to work. And because this technology is one hundred times less expensive than the alternative of cochlear implants, that means it can have real global impact, especially in developing countries. People don’t have to feel that it’s unaffordable for them if they want to hear.”

The relationship between our senses forms another of Eagleman’s research thrusts. Synesthesia is a condition that afflicts at least three percent of the population, occurring when there is a blending of the senses. “A synesthete might look at the letters of the alphabet, which triggers a color experience for them, or hear music, which puts a taste in their mouth, or have other cross-sensory experiences,” explained Eagleman. “These aren’t just memorized associations, but instead genuine perceptual experiences—it’s as though they were actually experiencing that color or taste. It represents the cross-talk between different parts of the brain that are normally kept separate.”

Eagleman has used synesthesia as a vehicle to examine how the content of consciousness differs between individuals, from the level of genetics to neuroimaging. “We’ve all thought about the possibility that what you see as red and what I see as red might be a different experience inside our heads,” he said. “We can now take this sort of philosophical conundrum and elevate it to a real scientific problem, because synesthesia gives us a measureable example in which one person’s sensory reality is different from another’s.” The Laboratory for Perception and Action developed a standardized battery for testing and quantifying the phenomenon—tens of thousands of people have taken the test, with over 20,000 now verified as synesthetes.

A testament to his vision for incorporating scientific discoveries into our social framework, Eagleman is also the director of Baylor’s Initiative on Neuroscience and Law. Studying how new discoveries in neuroscience should influence the ways that we make laws, punish criminals and develop rehabilitation, the project brings together a unique collaboration of neurobiologists, legal scholars and policymakers.

“Much of my research shows that reality can be quite different inside different people’s heads, and the next important question is what that means for us as a society,” said Eagleman. “The Initiative on Neuroscience and Law seeks to bring together the understand- ings of modern neuroscience with the way we run our legal system and practice social justice.

“A fundamental piece of that is recognizing that brains are very different from one another, and that means that jail is not the ‘one size fits all’ solution that we pretend it is in our courtrooms,” he added. “Instead, different people may have all committed
the same crime, but for different reasons. They may all have different paths—neurally speaking—by which they’ve arrived in front of the judge’s bench, and that allows us to move towards a tailored system of rehabilitation and punishment.”

As one practical application of those goals, Eagleman and his graduate student Ricky Savjani are using a cutting-edge neuroimaging technique to help individuals with cocaine addiction strengthen their own impulse control in a participatory manner, using real- time feedback from their own brains. Eagleman regularly speaks to audiences of judges and lawyers, educating them about critical issues in neuroscience. He’s also establishing formal collaborations with probation centers and prisons to study issues relating
to re-offense.

Given his emphasis on dissolving barriers to understanding, it’s no surprise that Eagleman views his research efforts as intertwined. “Everything we do here is networked,” he admitted. “It took me a lot of thinking to even figure out how to divide up my descriptions into separate projects. Everything is related in one way or another, and that opens an opportunity for a lot of cross-fertilization of ideas. All my research projects are at the intersection of what I consider to be the most interesting questions and where I might be able to make a meaningful impact.”