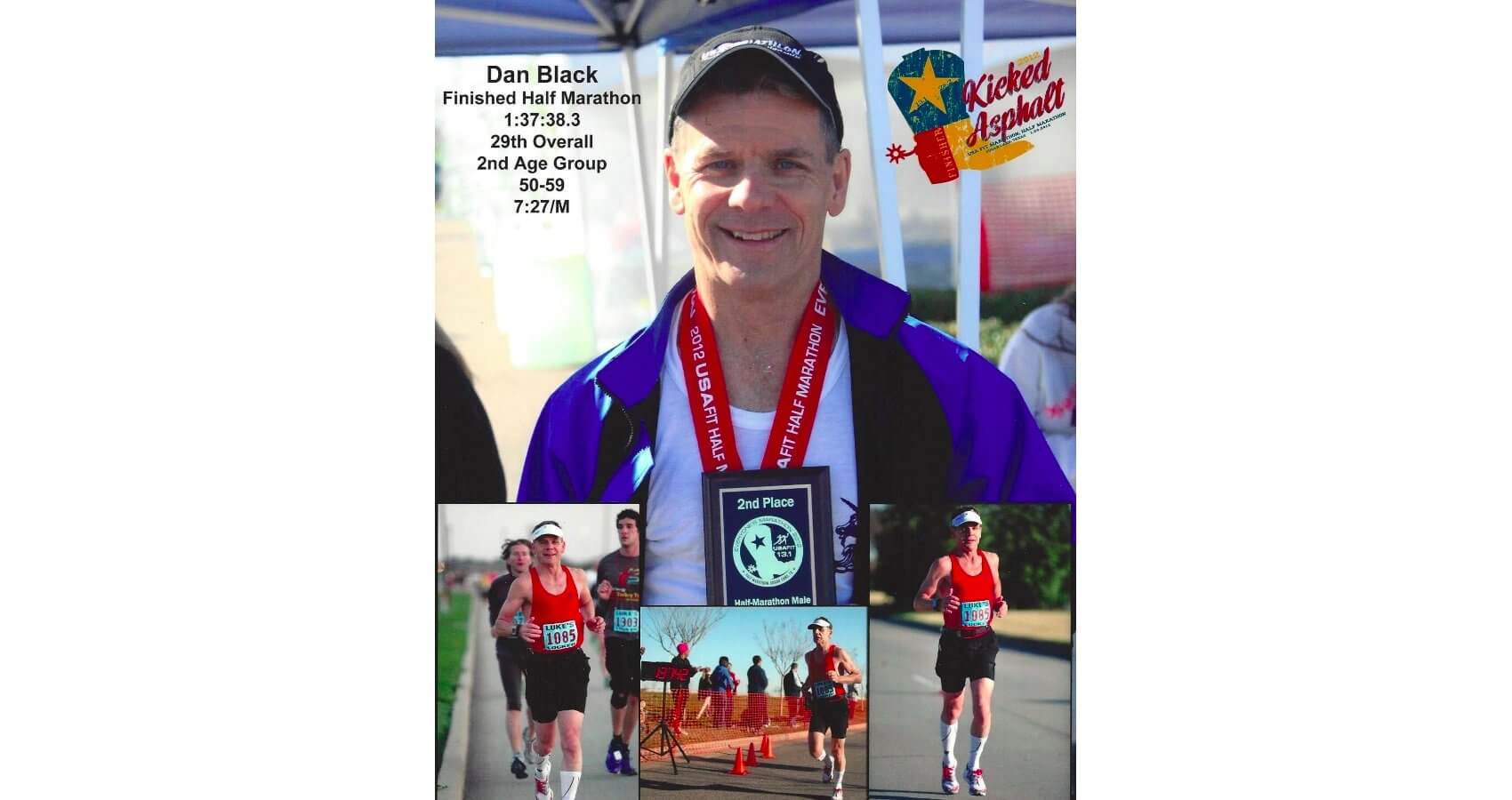 On Nov. 2, 50,511 people crossed the finish line of the New York City Marathon. Among them was Houstonian Dan Black. With a time of five hours, 38 minutes, this wasn’t the fastest of Black’s 37 marathons. But the journey that finally led him to the finish line in Midtown Manhattan made this race an enormous victory – one that, even just weeks before, looked nearly impossible.

Just two and a half short years ago, Black was diagnosed with esophageal cancer. For months, he hadn’t felt quite right as he suffered from “volcanic hiccups.”

“They were like a combination of a hiccup and a burp,” he said. “Things would be going down my neck and up my neck, and I’d feel this kind of explosion in the middle of my neck.”

After his regular physician referred Black to a gastroenterologist, the official diagnosis came April 27, 2012: cancer – a particularly aggressive form of it.

“I had the first endoscopy and the doctor didn’t even wait for the lab work,” Black said. “He came out while I was still under sedation and told my wife that my esophagus was almost totally blocked. It’s certainly a case of esophageal cancer.”

Esophageal cancer is a relatively rare form of the disease, but it has a high mortality rate. Only about 15 percent survive to the five-year mark. At the time of Black’s diagnosis, his wife was told to expect the worst – he would need hospice care, he was not likely to survive. The couple turned to Houston Methodist Hospital for treatment, and Black was immediately thrown into a whirlwind of care.

“There was a ten-day period that it seemed like there was one procedure after another,” Black said. “Because they had to stage the cancer, they put in the first of two feeding tubes, they put in the port for chemo, they had to do CT scans and PT scans, and I didn’t get started on chemo until May 18, 2012.”

Black underwent both chemotherapy and radiation therapy prior to surgery. Throughout that treatment, the goal that helped him push forward through his extreme exhaustion was the 2012 New York City Marathon, for which he had qualified prior to treatment. As he endured chemo and radiation, he continued to train, determined to complete that race. His doctor, Shanda Blackmon, M.D., who at the time was working at Houston Methodist, was supportive of his goal. She even scheduled his surgery around that race planned for Nov. 4, 2012.

“Finishing is everything. Finishing fast is not what this race was all about. I like to finish what I started, and even though it took a long time, altogether about three years, I was determined to get that race done.” — Dan Black, cancer survivor, NYC Marathon finisher

“All through therapy I continued working for that marathon,” said Black. “It was the carrot that kept me going through all that stuff.”

Sadly, Mother Nature had other plans. Just days before the marathon, New York City was rocked by Hurricane Sandy and the race was canceled. Shortly after, on Nov. 12, 2012, Black went into surgery. The operation brought good news – the cancer appeared to be gone.

“On our wedding anniversary, which was Friday, Nov. 16, Dr. Blackmon came running, literally, into my hospital room, waving the reports saying, ‘It’s gone, it’s gone!’ They’d done tons of diagnostics, they took out all the ten centimeters of my esophagus, they took out part of a rib, they took out 37 lymph nodes, just everything they could get their hands on, and there wasn’t one cancerous cell anywhere,” Black said. “Dr. Blackmon said she was going to go out on a limb to say that I would probably be one of the 15 percent that doesn’t have to wait five years. She said she would go out on a limb and say you have beaten this right now.”

Thrilled about his victory over cancer, Black still had another conquest in the back of his mind – completing the New York City Marathon. He made a goal of running it in 2014, giving him time to recover from the difficult surgery.

“Recovery after surgery was infinitely worse than the chemo and radiation,” Black said. “Trying to get used to the new system after esophagectomy, that’s been really hard and I’m not there yet.” Black faced a number of setbacks post-surgery. In January 2013, his heart went into atrial flutter, beating around 300 beats per minute. In March 2013, he tore a muscle in his back that required surgery. But the worst by far occurred Sept. 1, 2014, just weeks before he planned to be in New York City for the marathon. Black experienced a bowel obstruction that nearly killed him and required two surgeries to correct. It was a direct complication from his surgery.

“When I started coming to sometime on the evening of Sept. 3rd, they said, ‘The race won’t happen. It can’t happen,’” said Black. But even that wasn’t enough to persuade him to sit still. “In the back of my head I was thinking, ‘You want to bet?’”

A few weeks later, Black was in the office of Laurie Punch, M.D., his surgeon at Houston Methodist. She gave him the green light to race.

“Dr. Punch is a miracle worker,” said Black. “She said, ‘Once you get to the six-week mark, you go right ahead. I encourage you. This is fine.’ So on October 16th, she cleared me to run.”

A little over two weeks later, Black was at that starting line on Staten Island, waiting to run the 26.2 miles he had anticipated for nearly three years. Black is still not back to 100 percent health, and for the man who has run a marathon in three hours and 15 minutes, it was his slowest time by nearly two and a half hours. But this marathon was about so much more than speed.

“Finishing is everything. Finishing fast is not what this race was all about,” he said. “I like to finish what I started, and even though it took a long time, altogether about three years, I was determined to get that race done.”

Though running marathons post-cancer treatment is certainly not attainable for every patient, doctors these days encourage their patients to remain as active and engaged as possible in their normal lives throughout treatment.

“The new paradigm isn’t having patients go home and stay in bed,” said Min Kim, M.D., head, section of thoracic surgery at Houston Methodist Hospital. “What we’ve been promoting is go home, walk. We really want the patient to be active so they can avoid complications. By doing that they recover better and faster.”

Kim, who is also an assistant professor of surgery at Weill Cornell Medical College, did not treat Dan Black, but he does care for other patients undergoing esophageal cancer treatment at Houston Methodist. Part of that care involves setting up a physical regimen for those patients.

“I tell them, ‘You have to walk a mile a day,’” he said. “Those patients I’ve found who are willing and excited and actually do those things and get ready for surgery do better compared to people not following the recommendations.”

As Dan Black continues to recover, it’s a safe bet he won’t be resting on his laurels. In fact, he is already planning out his next major races.

“I’ve got the Sugar Land marathon in January, Seabrook marathon in March, and I’m going to California to the Big Sur Marathon in April,” Black said. “That’s a bucket list one. That’s what I’ve had my eye on since I first started marathons.”

Black hopes to work on improving his time and getting back to sub-four-hour marathons. Few races, however, no matter how swiftly he runs, are likely to take on the same significance as his first New York City Marathon finish.

“I had to do that race. I didn’t realize how big a deal it was until about the middle of this last week when I was home and had a chance for it to settle in,” he said. “I really needed to close that loop and I’m glad I have.”