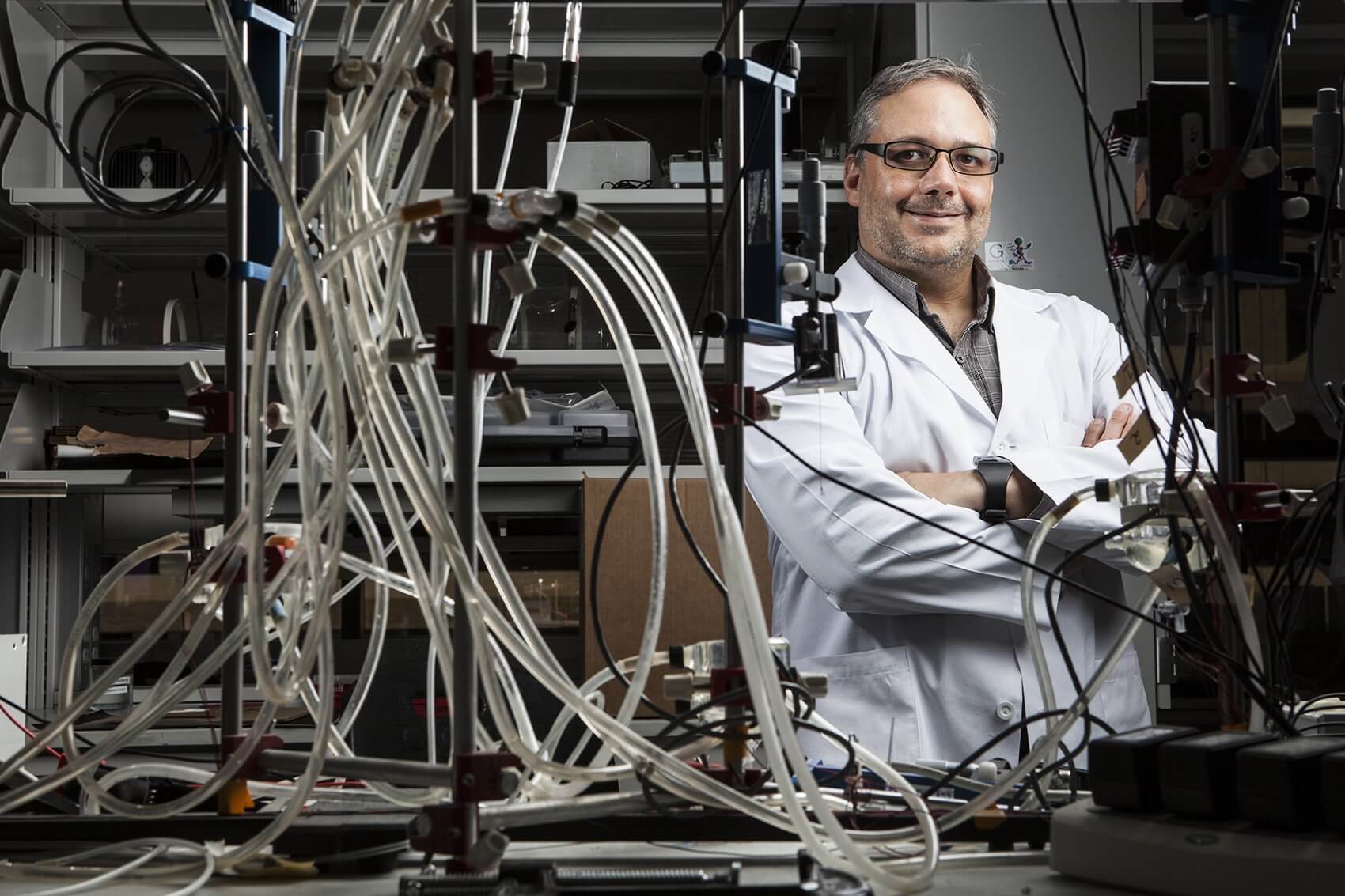 Each year, close to 40,000 babies in we could put in that doesn’t end up as be stringently tested. Future research some very severe heart defects like a the United States are born with a congenital heart defect. It is the most common birth defect in the country and, tragically, thousands of those infants will not reach their first birthday. In the Texas Medical Center, bioengineer Jeffrey Jacot, Ph.D., is working to improve outcomes for congenital heart defect patients by developing new ways to repair those tiny hearts and keep them beating through long, healthy lives.

Jacot is an assistant professor of bioengineering at Rice University and the director of the Pediatric Cardiac Bioengineering Lab in the Division of Congenital Heart Surgery at Texas Children’s Hospital. His spacious lab, located in the Feigin Center at Texas Children’s, is devoted to using biomaterials and stem cells to cure congenital heart defects.

Speaking in his sunny office, located just feet away from the activity of the lab, Jacot shows a deep enthusiasm for the work he’s currently doing to patch up broken hearts and for the impressive goals he’s set for the future. Among a number of exciting projects taking place in the lab, one of the most promising involves using single-walled carbon nanotubes to help electrical signals pass freely through patches used to repair pediatric heart defects.

“We’re concerned with finding a piece of tissue or some sort of material that we can sew in that surgeons can use to reconstruct a heart with a structural abnormality,” said Jacot. The patches currently in use, made of materials such as Dacron or Teflon, eventually end up as pieces of scar tissue in the heart, often impeding the heart’s electrical impulses.

“They lead to several complications, but one of the most common is arrhythmias,” or irregular heartbeats, said Jacot. “We wanted to find something a big piece of scar tissue, but can blend in with the rest of the heart and also doesn’t disrupt the electrical signals.”

A couple of years ago, Jacot’s team created a patch that could be implanted into the heart and would allow cells to invade. That first patch did not solve the problem of electrical signal disruption, which is why they turned to nanotubes. Jacot collaborated with Matteo Pasquali, Ph.D., a professor of chemical and biomolecular engineering and chemistry at Rice, whose lab makes highly conductive carbon nanotubes—minuscule cylinders made of carbon.

“I had the hypothesis that if we put these into a patch, when we loaded it with cells, these could help the cell-to-cell electrical communication,” Jacot said. The patches are made of collagen, chitosan—a processed form of crustacean shells—and the nanotubes. The chitosan helps keep the nanotubes spread out and prevents clumping. Pores in the patches allow cells to invade and form their own networks, and the conductive nanotubes facilitate the electrical signals between the cells. Meanwhile, the patch slowly degrades and is replaced by natural tissue.

The results thus far are promising, but there is still much to learn before the patches can be put to use in human subjects. Most importantly, the team must examine the carbon nanotubes for toxicity. The rest of the patch materials have been deemed safe for use in other devices, but the nanotubes have yet to will also determine the exact fate of the conductive nanotubes as the patch degrades.

“People are still investigating the toxicity of certain types of carbon nanostructures. Some of them have been shown to be toxic, some aren’t,” said Jacot. “Our initial test with heart cells, specifically, seemed to show that we can’t see any toxicity as long as we keep a fairly low, under 100 parts per million or so, concentration of these nanotubes.”

In addition to the experiments with nanotubes, Jacot’s lab is working toward using amniotic fluid stem cells to make heart cells. Those heart cells would then be used to invade the patches, creating a custom patch for each infant. Heart defects are often diagnosed in fetuses at around 20 weeks gestation, which offers time to prepare the patch to fix the defect immediately after birth.

“You could diagnose a heart defect in a fetus, grow heart tissue and have the tissue ready to repair the defect when the baby’s born,” said Jacot. “When the baby’s born you have this infant you’re going to need to operate on anyway, but then you can implant something made with that infant’s own cells.” The benefit of using cells genetically matched to the infant is lessening the risk of rejection and the need to suppress the child’s immune system post-surgery.

Jacot’s ultimate goal in the field of cardiac bioengineering is to build living tissue that can be implanted into hearts to repair much larger defects than the patches are able to handle. The patches are limited in terms of size by how far cells are able to invade. With living tissue, “you can build up large portions or restructure large portions of the heart,” said Jacot.

“I think you can look at cures of single ventricle defect, where a baby can be born with one ventricle instead of two ventricles,” Jacot continued. “It requires a large series of operations to correct that over the course of many years, and you still don’t end up with a heart that works as well as a typical heart. A lot of these children keep having problems later in life.”

Naturally, the grand vision that goes hand-in-hand with building living tissue is engineering a whole heart—from scratch. “That’s the many-years-off thing,” said Jacot. “If you could do that then you could imagine off-the-shelf hearts. When somebody needs a heart transplant they don’t need to wait for a donor. They order, they figure out the size and get an off-the-shelf heart that is implanted.”

As Jacot envisions a bright future for cardiac bioengineering, his passion for the field is palpable. “It’s really exciting, a lot of technologies are coming together right about now,” he said, adding that working with two different institutions at the Texas Medical Center provides a unique and comprehensive environment for research.

“Rice is one of the very top bioengineering departments in the world and it’s well known for biomaterials and tissue engineering. Texas Children’s is one of the top children’s hospitals and especially well known for pediatric cardiology and cardiac surgery,” said Jacot. “Being associated with that cardiac surgery team and with Rice bioengineering allows me access to all of those resources and allows me to meet day-to-day with congenital heart surgeons and collaborate with people who are really on the cutting edge of materials research. It’s a good time to be working on this.”