A Gift with Meaning

A Gift with Meaning 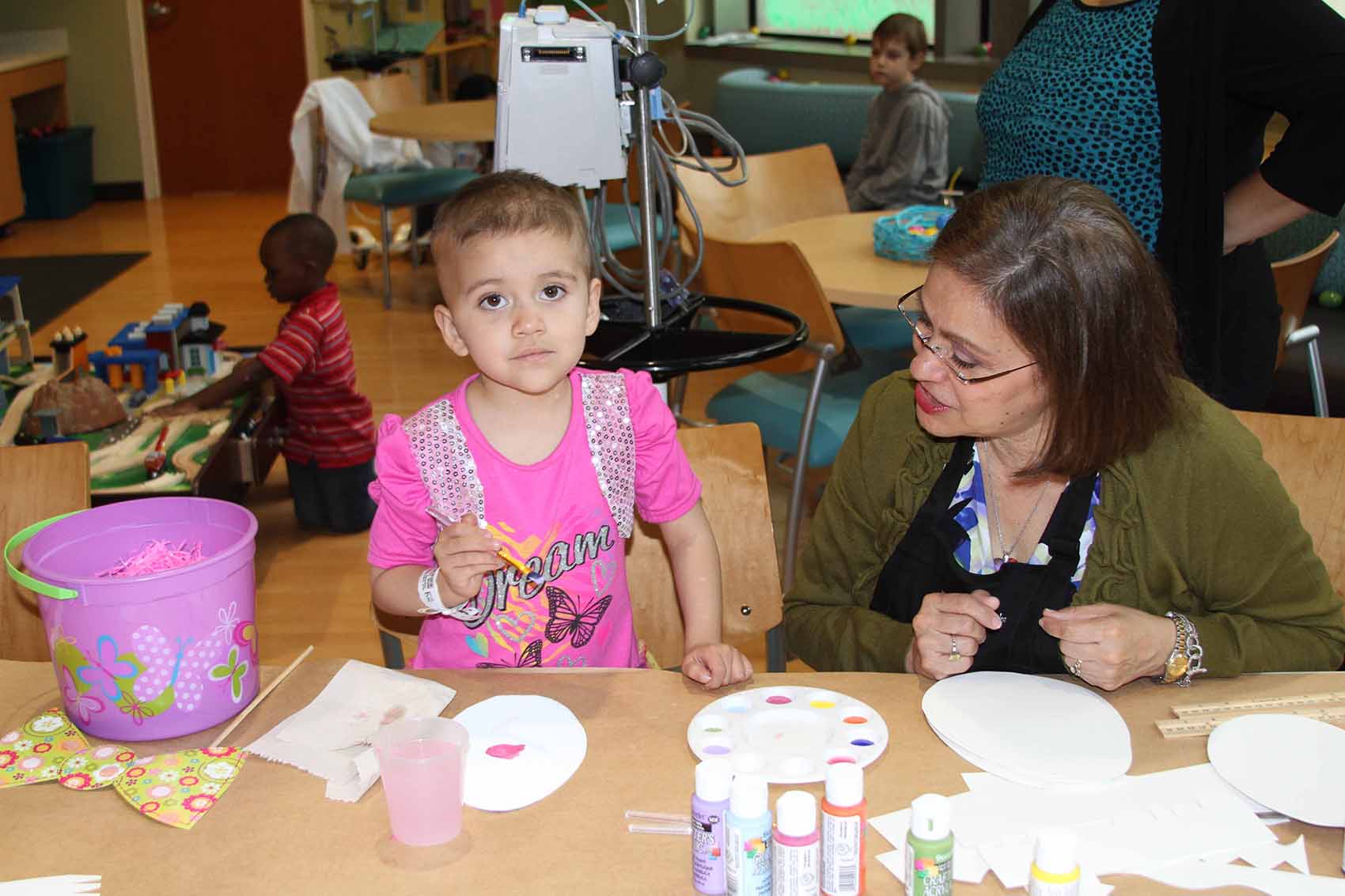 What started as a volunteer’s suggestion to incorporate the children of The University of Texas MD Anderson Cancer Center’s artwork into Christmas cards has grown into a full fledged charitable art program that creates a variety of products throughout the year to raise funds for the patient programs at the children’s cancer hospital.

A lot has changed since 1973 when the project first began. In the early days, the children at MD Anderson did not have classrooms or a proper space to have fun and create. During its first year, the Children’s Art Project raised $588 from sales of Christmas cards, and the proceeds went towards simple gifts, such as parties for the children.

Now the Children’s Art Project generates close to $5 million a year to fund important programs for the children, such as a summer camp, called Camp AOK, where patients and their siblings can go do typical summer camp activities, including horseback riding, archery and fishing, all with the comfort and safety of doctors and nurses who accompany them to the camp. Additionally, the project raises funds for the in-hospital, accredited kindergarten through 12th grade school at MD Anderson, as well as college scholarships to help young patients and their families who may have suffered financially due to the stress of cancer treatment.

“In 41 years we have returned more than $31 million back for programs,” said Shannan Murray, executive director of the Children’s Art Project. “The programs are recreational, educational or emotionally based in an effort to help the children go on with their lives. The programs are particularly helpful because they have made a lot of strides in cancer treatment for children and so now the children need to go on to college and go on with their lives and the focus is really on their survivorship.”

At the in-hospital school, children at MD Anderson take art classes as part of their curriculum. Teachers, volunteers and staff teach the children drawing, painting and collage making. The children are encouraged to have fun and create whatever they like. Throughout the year the staff collects the children’s artwork and submits the work to the Children’s Art Project archives.

“As you can imagine, it’s very hard to choose designs and we need a lot of help,” Murray said. “We have our volunteers help us narrow down the line about 18 months ahead of time. About 2,000 people help us narrow the choices down to a workable number of designs, and if a child’s artwork is not chosen that year, as long as they created it before they turned 19, and while they were a patient at MD Anderson, their artwork can be chosen any time.”

As the project has expanded, more artwork by both current and former patients has been able to be featured. Each year more products are added to the catalog and gifts are created for more holidays, including Valentine’s Day, Mother’s Day and Father’s Day. Some products even feature multiple children’s artwork in their design.

“Because we are producing more products like kitchenware, ties, scarves, children’s books, calendars, jewelry, phone covers, etc., there are more pieces of artwork that can be used. A lot more children are being recognized now than in the early days,” said Murray. “In the past, if a piece of artwork couldn’t stand on its own as a card, it wouldn’t be chosen. Now we need more art to go on children’s books, calendars and even the scarves.”

It’s not uncommon for the Children’s Art Project to take advantage of its abundant archives. For example, Murray mentioned that this year a design was chosen that was created by a former patient at MD Anderson who made the artwork when she was a teenager undergoing treatment at the hospital. Now that former patient is grown and has a family of her own, but this year will be her first time being featured as part of the Children’s Art Project.

“The thing that is really unique is that the kids are undergoing something where they don’t feel that they have a lot of control in their lives,” Murray said. “They are undergoing cancer treatment, which is hard for anyone to go through, especially a child. But when their artwork is created and chosen it is a very powerful thing and the child actually sees that they are making a difference in their peer’s life when their lives seem very out of control. It’s a very empowering thing for the children. They understand that they are making a difference in other people’s lives and that’s a wonderful thing. It’s a good lesson for anyone.”

The holiday season marks the busiest time of year for the Children’s Art Project. Volunteers and staff pack orders for shipment and showcase products at trunk shows and holiday shows such as the annual Nutcracker Market. In the medical center, there is a taskforce of volunteers who work to spread the word about the Children’s Art Project and encourage people to make a meaningful purchase for those on their holiday lists.

Hannah’s love of art shines brightly in her MD Anderson art classes. The courageous six-year-old was diagnosed with a brain tumor in 2012, and the ability to create art inspires her to fight and beat cancer. The classes provide the perfect environment for her creativity to bloom. She dives into new proj- ects with enthusiasm and enjoys creating colorful designs. Hannah’s sweet giggles show that despite all the strenuous treatments, she can find humor in most situations. She shared many laughs with us this summer at Camp Star Trails, Anderson’s overnight camp for young patients. Hannah had a wonderful time making new friends and participating in activities like swimming, horseback riding, and of course, arts and crafts.

Hayden is a friendly eight-year-old from Spring, Texas. He enjoys creating artwork and playing fetch with his dog Pirate. Many boys his age like to watch superhero movies, but Hayden prefers to fight the bad guys himself in his favorite video game, Skylanders: SWAP Force. While undergoing treatment for a brain tumor, Hayden participated in MD Anderson’s Child Life Program. Its recreational activities, like the art classes, really brightened his hospital stay. His stuffed animal Nosy brought him comfort too, its nose worn from countless Eskimo kisses. Hayden is excited that his Christmas-themed truck design was selected for a holiday card and he hopes to have his artwork featured on an ornament one day.