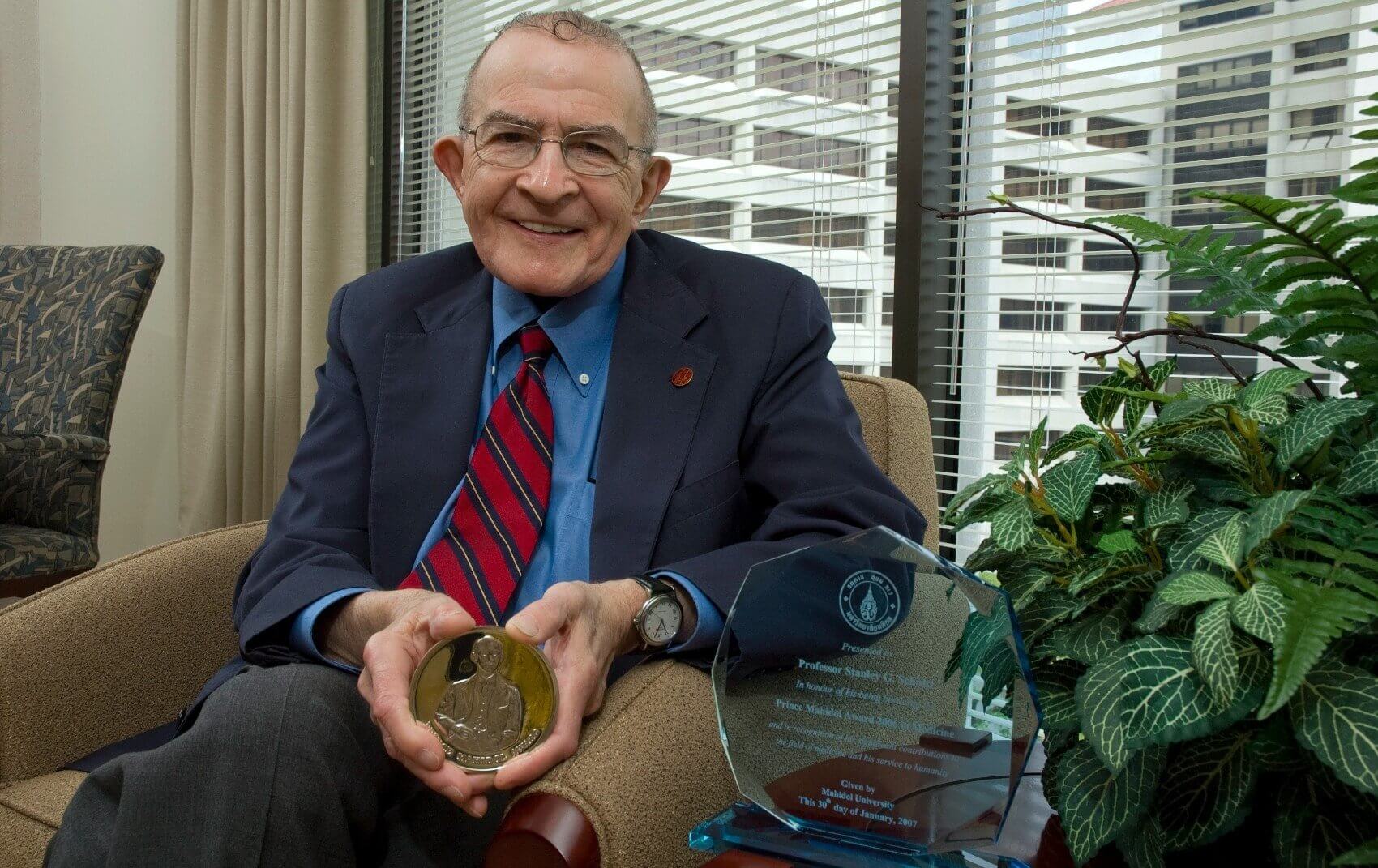 Schultz was a key contributor to the discovery, introduction and widespread use of oral rehydration therapy. This treatment for severe fluid loss caused by diarrheal diseases is estimated to have saved more than 40 million lives in the past 35 years.

“Beloved as a teacher, mentor and a friend, he was also internationally known as a brilliant scientist whose work saved many lives,” said Giuseppe Colasurdo, M.D., president of UTHealth. “He was the heart of the UTHealth Medical School while he was here and long after he had ceased to have an active role. He will be deeply missed.”

While at Harvard Medical School, Schultz took a two-year leave of absence for military service. In 1962, he was inducted into the U.S. Air Force as a captain in the medical corps and was stationed at the U.S. Air Force Aerospace School of Medicine at Brooks Air Force Base in San Antonio. Schultz taught radiation biology, monitored research contracts and conducted research on the biological effects of radiation. This sparked his lifelong interest in intestinal absorption.

Schultz returned to Harvard Medical School in 1964. Three years later, he joined the Department of Physiology at the University of Pittsburgh School of Medicine as an associate professor and was promoted to the rank of professor in 1970. After developing a highly productive research program at Pittsburgh, which included a sabbatical at the University of Cambridge in England, he joined the UTHealth Medical School as professor and chairman of the Department of Physiology in 1979.

John H. “Jack” Byrne, Ph.D., chairman of the Department of Neurobiology and Anatomy at the UTHealth Medical School, first met Schultz in the early 1970s when they worked at the University of Pittsburgh School of Medicine. Schultz later recruited Byrne to join him at UTHealth.

“Dr. Schultz was an outstanding scientist who made fundamental discoveries about the ways in which molecules cross membranes,” said Byrne, noting that this information furthered the understanding of conditions such as cystic fibrosis.

Norman W. Weisbrodt, Ph.D., adjunct professor in the Department of Integrative Biology and Pharmacology at UTHealth, also lauded Schultz’s contribution to the development of faculty and students.

“He was a great mentor. I learned a great deal from him about conducting research and teaching,” Weisbrodt said. “He was a role model – not just in what he said – but by leading by example.”

Patricia Butler, M.D., professor in the Department of Psychiatry and Behavioral Sciences and Vice Dean for Educational Programs at UTHealth, described Schultz as an “outstanding teacher beloved by students.”

In 2007, Schultz was recognized by the Houston chapter of RESULTS with a Seeds of Hope Award for research that led to improved health conditions for people living in poverty. The local award is one of numerous honors Schultz received for his lifelong work on the mechanism of sodium and glucose-coupled absorption in the small intestine. Schultz’s work also was recognized internationally, notably in 2006, when he received the Prince Mahidol Award in Medicine by King Bhumibol Adulyadej of Thailand.

“He was a highly regarded investigator who made breakthrough discoveries. As an administrative leader, his contributions were crucial to the growth and stature of the Department of Physiology during an important phase of the medical school,” said George Stancel, Ph.D., executive vice president of Academic and Research Affairs at UTHealth. “He was just as widely considered a gentleman and a scholar in the truest sense of the word.”

Schultz recently moved to Mountain View, California, to be close to his beloved children and their families, including five grandchildren.  He is survived by Harriet, his wife of 53 years; his sons Jeffrey and Kenneth; their wives Carol and Heather; and his grandchildren: Aaron, Colin, Kelly, Julian and Keira.

Gifts in the memory of Schultz may be made to the Stanley G. Schultz, M.D. Student Travel Award in Global Health or The Doris Simon Student Fund. Gifts should be mailed to: UTHealth, Office of Development, P.O. Box 1321, Houston, TX  77251-1321.

The family is planning a private memorial service in California.