One layer at a time

Inspired by cooking shows, one researcher is exploring how 3-D printing could be used to create dissolvable vascular structures

One layer at a time 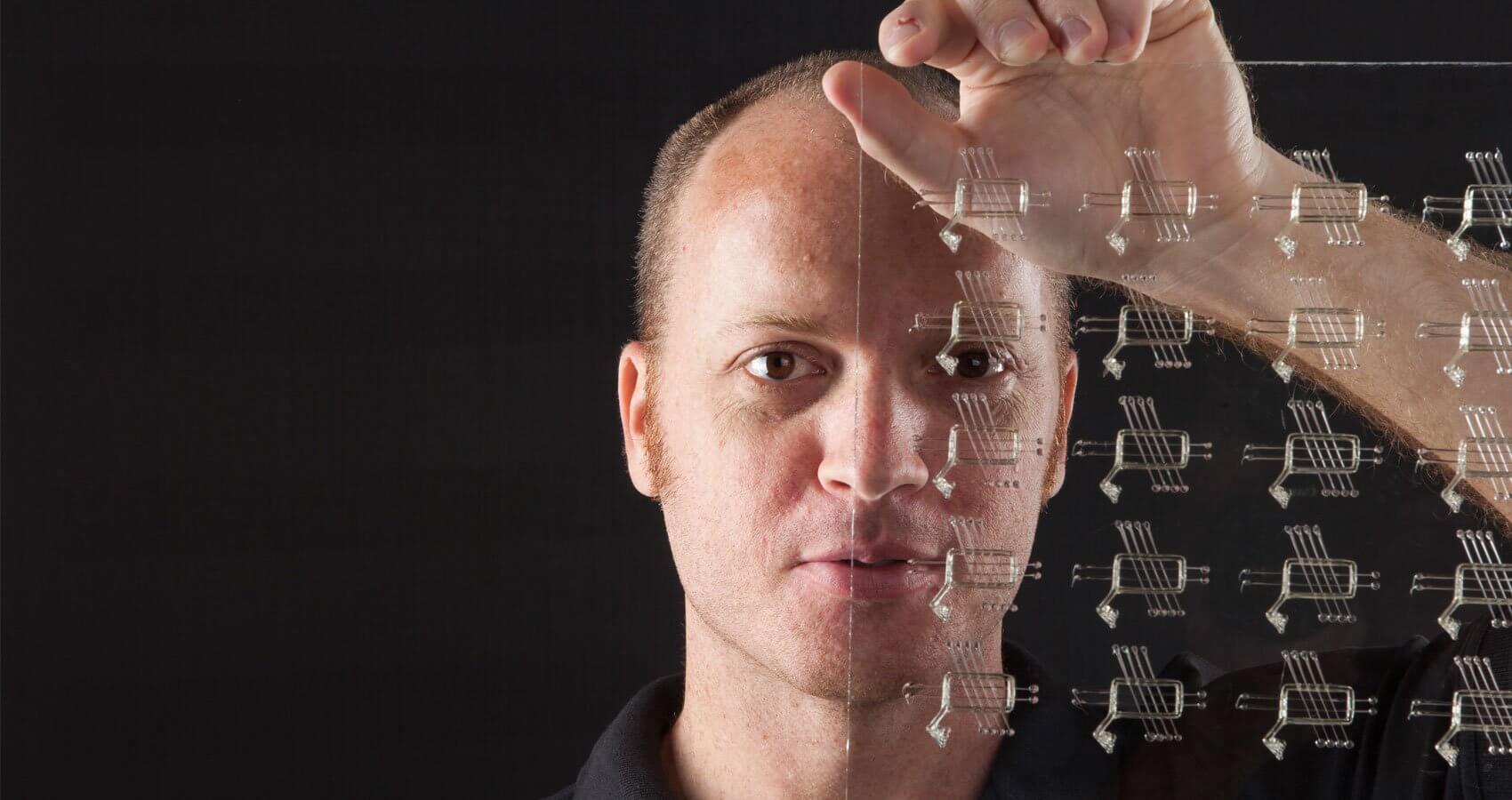 The hum of the 3-D printer, whirring rhythmically as it lays down different layers of crisscrossing filaments, is almost hypnotic. When the machine quiets down, what is left behind blurs the increasingly permeable membrane between science and science fiction—a dissolvable scaffold that can create hollows within printable organs, mimicking our own blood vessel networks. The inspiration behind this groundbreaking discovery? Something as simple and sweet as dessert.

“I watch a lot of cooking shows and I like dessert, so things like crème brulee or the sugar cages that chefs make at fancy restaurants really looked to me like the prints we had made and reminded me of blood vessel architecture,” said Jordan Miller, Ph.D., an assistant professor of bioengineering at Rice University who is pioneering the use of 3-D printing to create vascular networks for research in tissue engineering and regenerative medicine. “That’s when it clicked that we should use sugar.”

Three-D printing, the process that “prints” a three-dimensional object from a digital image by laying down consecutive layers of material, is sending ripples across the biomedical community with the eventual goal of creating customizable printed organs for transplant use. In the efforts to navigate the obstacles to printing a fully functional human organ—such as meeting the nutritional needs of cells deep within living tissue—Miller’s approach may hold the key to successfully crafting more complex tissues.

“One of the traditional roadblocks in creating something as complex as organs is getting the blood vessel network in place,” explained Miller. “It’s similar to baking a loaf of bread, where you get a crust layer that forms all around the outside because the dough is getting more oxygen on the outer surface. The same thing happens if you take a bunch of cells and try to put them together in 3-D—if you try to make something the size of a human organ composed of human cells, all of the cells in the center of that structure will die because they can’t get access to the nutrients and the oxygen. The blood vessel network in your body is what feeds all of the cells deep within a tissue.”

Miller, who joined Rice in July of 2013, crafted his technique for printable vascular structures at the University of Pennsylvania—where he conducted his postdoctoral research—in conjunction with other researchers and the guiding hand of members of the computer technology workshop, Hive76, Miller helped to found in Philadelphia in 2009. At the same time, the worldwide open- source consumer 3-D printer movement was just getting started, based largely on the RepRap project out of Bath University, U.K.

Instead of printing plastic, Miller’s heavily modified RepRap printer now constructs templates of blood vessel networks by building up layers of intersecting filaments, composed of sucrose, glucose and dextran for structural reinforcement. Once the sugar hardens, scientists surround the scaffold with a mixture of cells and gel to create soft tissues. When that process is finished, the scientists dissolve the sugar solution, leaving small hollows within the sample that can be used to deliver nutrition to the inner cells.

“Houston, having the largest medical center in the world, has huge potential to capitalize on some of the research going on in 3-D printing and apply it for basic diagnostics, organ-generation technologies, and understanding the pathophysiology and etiology of disease,” said Miller. “It’s going to be a long time before we can make whole replacement organs that we’ve custom printed for someone, but maybe we can start by making much smaller types of tissues—something the size of your fingernail that has human liver cells embedded within—for pharmaceutical screening. There are even opportunities to test the toxicity of new drugs, using a patient’s own cells. By creating patient-specific models in the lab, we hope to provide a very personal prediction of how drugs might react in a given patient.”

Earlier this year, Miller marched his printer up the steps of Capitol Hill to show lawmakers and staffers the revolutionary potential of 3-D printing at 3D/DC, an event hosted by the consumer advocacy group Public Knowledge. Encouraging the upward trajectory of the technology and hoping to counter the emergence of restrictive intellectual property laws, 3D/DC provided the 3-D printing community an opportunity to educate policy makers and the public about the benefits of widespread access.

“I love that [Jordan’s] building processes on open source hardware, which means that as he moves forward, he is dragging everyone along with him,” said Michael Weinberg, vice president of Public Knowledge. “He’s pushing the limits of the technology in a very open, public way that says, ‘If you want to push the limits, too, come along with me.’”