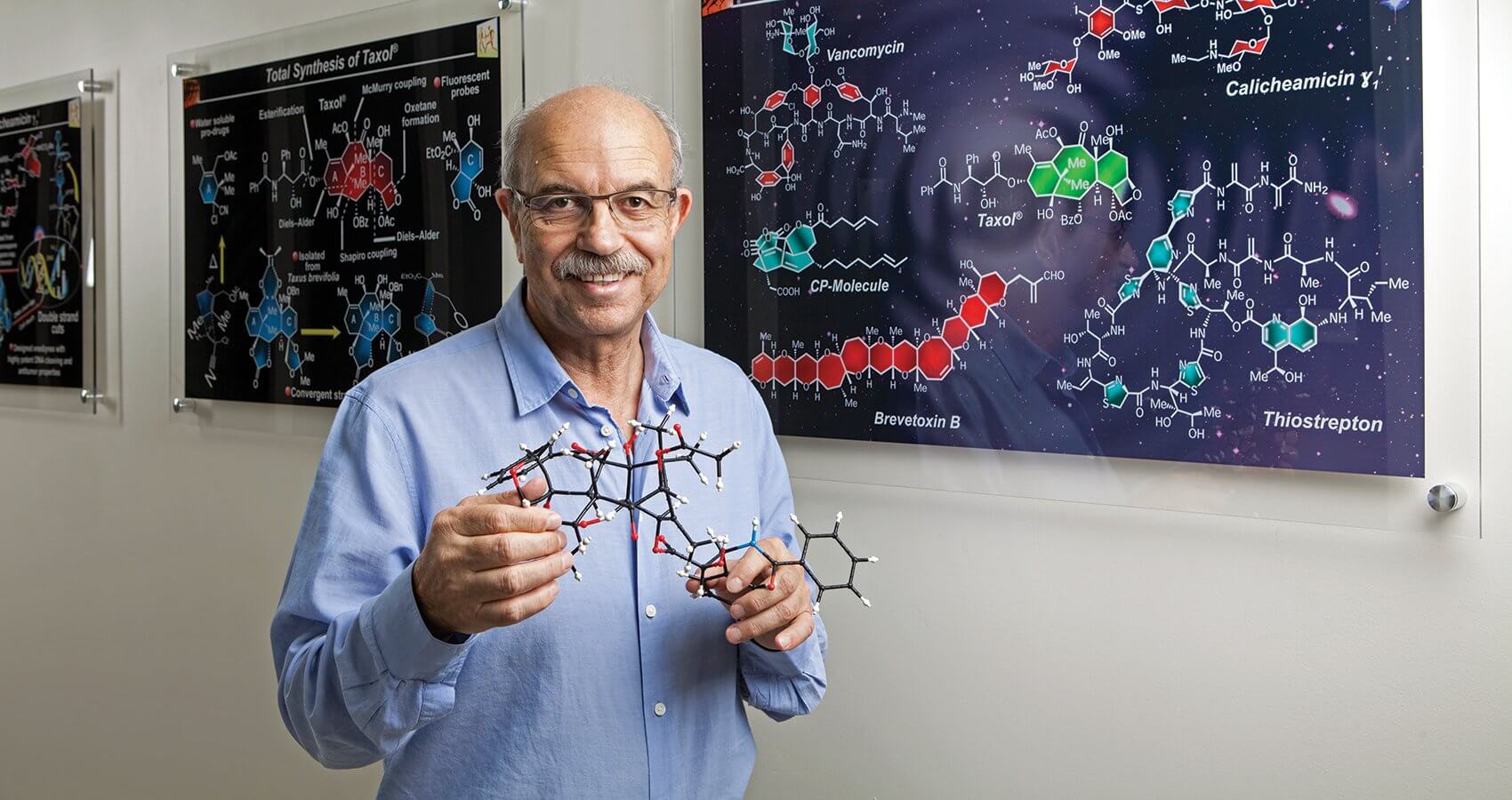 Q | What would you consider to be your most successful innovation?

A | The total synthesis of Taxol, the widely used anticancer drug, is perhaps our most successful innovation because of the celebrity status of the molecule in scientific and medical circles. However, our innovation is more global than that. It can be more accurately described as the advancement of the art and science of total synthesis to new levels of molecular complexity and diversity, and the synthesis of natural and designed molecules of biological and medical importance. Although this is a life long contribution that includes hundreds of biologically active molecules, there are singularities that stand out as milestone achievements in the field of total synthesis. These include, in addition to Taxol, the syntheses of Amphotericin B (a clinically used antifungal drug), Calicheamicin [(potent payload for antibody drug conjugates (ADCs)], Brevetoxins A and B (potent marine neurotoxins associated with the ‘red tide’ phenomena), Vancomycin (often called the last line of defense of humanity against bacteria), and Thiostrepton (veterinary antibiotic). Our most recent innovations include the synthesis of the antibiotic Viridicatumtoxin B (active against drug-resistant bacteria), the rare Δ12–Prostaglandin J3 (antileukemic agent that ablates cancer stem cells), and a series of potent DNA-cleaving molecules intended for use as payloads for ADCs.

Q | What spurred this innovation?

A | Ever its inception in the early part of the 19th century, organic synthesis in general and total synthesis in particular have been improving. Today the art and science of organic synthesis is quite sharp in terms of efficiency and complexity of the molecules it can reach. And yet, compared with nature, its power is still rather primitive. This demands continuous innovations to reach higher levels of efficiency, complexity and green chemical processes that leave behind little or no waste. This was one of the reasons we undertook endeavors of total synthesis of complex molecules like Taxol. The case of Taxol was made even more compelling in the 1980s and early 1990s when Taxol was in clinical development and its natural (Pacific yew) scarcity became an issue. This provided a strong motivation for synthetic organic chemists around the world to attempt to synthesize it in the laboratory. Our synthesis was the first to be published in the Journal Nature in 1994. In the meantime, a new natural source (European yew) for an advanced precursor of Taxol was discovered that solved the supply problem through a semi-synthesis of the drug. Thankfully, today every patient who needs Taxol can be treated with the drug.

Q | What are the unique benefits of that innovation that make it a valuable solution?

A | Total synthesis is considered by many as the flagship of organic synthesis, the latter being the foundation of the drug discovery and development process. Advancements and innovations in synthesis, therefore, translate into sharper tools and technologies that facilitate biology and enable discoveries of new medicines and their manufacturing through efficient and green processes. Furthermore, innovations in organic synthesis offer new opportunities to improve the drug discovery and development process by accelerating the construction of new molecular entities and novel structural motifs with improved pharmaceutical properties that may lower the attrition rates of success of drug candidates in clinical trials. The synthesis of rare, naturally occurring molecules and their analogs renders them readily available for thorough biological investigations and applications in medicine. A demonstrative example of this is the synthesis of scarce highly potent cytotoxic compounds that can be used as payloads for ADCs. Indeed, the advent of and recent surge in antibody drug conjugates as targeted anticancer drugs inspired a renaissance in total synthesis, the awesome power of which made it possible to design and construct such sophisticated and effective drugs. Overall, we are pleased that our innovations in total synthesis of natural and designed molecules impacted favorably chemistry, biology and medicine.

Q | What resources were helpful to you when you were first starting out?

A | When I started my independent academic career as an assistant professor in 1976, my start-up package included $20,000 for my research. My strongest resources were my students, the inspiration and support of my mentors, and my motivation to succeed. I spent my funds quickly without counting, despite the watchful eyes of the administration. Thankfully, it was not long before NIH rescued me through funding that increased steadily over the years until the recent de-investment in biomedical research. Those were the good old days when essentially all good science was funded. Unfortunately, nowadays it is much more difficult, especially for young faculty, to secure the resources they need to establish their careers on the international scene. Indeed, the international leadership of the United States and the American dream are in danger of being eroded. I was one of those young students inspired by President Kennedy in the 1960s and one of those immigrants who benefited from the American dream. When I first came in 1972, America was on the move. We clearly need to reinvigorate education and science and create new opportunities for our young scientists to create and invent through visionary planning that includes significant increase in funding.

Q | What advice would you give to other aspiring entrepreneurs and innovators?

A | What I tell young students is to discover their talents and follow them with passion. This is another way of following Socrates’ ‘know yourself.’ If you are good at something, your chances of success in it are maximized. Success will bring you confidence and earn you respect and admiration. Happiness will follow and hard work will seem like a hobby. Conduct yourself with ethical principles and values in all your work and dealings with people and you will elicit loyalty and trust. Entrepreneurship and innovation can be highly rewarding endeavors and result in myriad benefits and joys — not only for you, but, most importantly, to society as a whole. Always aim high and exhibit resourcefulness, persistence and, above all, courage to attempt the seemingly impossible. Your success depends not only on your motivation and talents, but also on the mentors you encounter on the way. Continue to learn and dream, and accept failure as part of the path to discovery. Enjoy the voyage, for it has a lot to offer you in terms of wisdom and other riches, even if you do not reach your ‘Ithaca.’