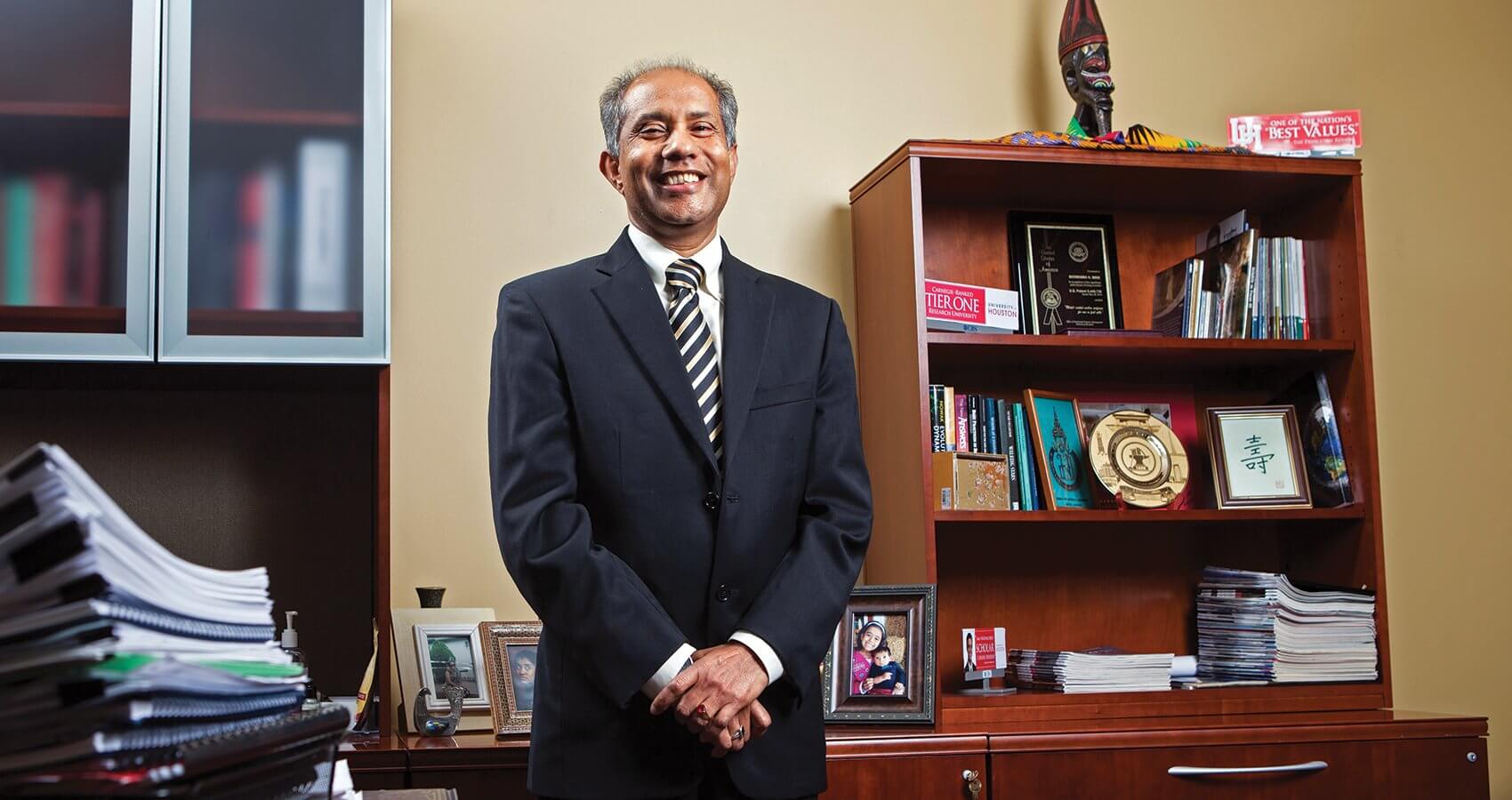 Q | What would you consider to be your most successful innovation?

A | A class of anti-cancer compounds called phosphaplatins that has the potential to treat a variety of cancers, including metastatic cancers. I consider that class of compounds as the most successful innovation that came from my laboratory over the last 30 years or so.

Q | What spurred this innovation?

A | It was kind of a grand vision when I started this project. I was trying to create a class of affordable and less toxic cancer drugs that would have a broad impact in society. So that’s the motivation. Failure after failure over many years taught me a lot about how to design a more effective cancer drug. In fact, my last approach for developing this kind of therapy really started when we began to understand the human genes, the implications of the mutations, and what causes cancer and what stops cancer.

So the motivation, as you asked, came from different angles. The human suffering is number one, number two is the affordability of cancer drugs, and number three is reducing the toxicity of those cancer drugs so that people can really get a treatment without experiencing severe side effects.

Q | What are the unique benefits that make this innovation a more valuable solution?

A | The benefit is that the compound we discovered has exhibited efficacy against a wide variety of cancers, from lung cancer, ovarian cancer and prostate cancer, to head and neck cancer. So we have investigated a variety of cancers in our lab and it appears that this class of compounds is effective against various cancers. The benefit is going to be not just one targeted group of patients, but a wide breadth of patients.

Q | What resources were most helpful to you when you were first starting out?

A | I have always worked in a university setting, so the infrastructure that has been available to me in the university allowed me to synthesize our compounds. You need synthetic and characterization facilities to know exactly what you are making, drug-testing facilities that determine both toxicity and efficacy, and then preclinical facilities to demonstrate compounds’ potential for eventual clinical trials. These are expensive facilities that include synthetic laboratories, X-Ray, NMR, mass spectrometry and other characterization facilities, cellular and molecular biology laboratories to decipher efficacy and toxicity, animal facilities, etc. Universities offer these facilities to all faculty and, hence, it is much easier for all of us to test our hypotheses, including those that routinely fail. It is this environment that is different from those focused pharmaceutical companies where ‘failures’ are not acceptable and they often veer into different directions when projects fail.

The second is actually the human resources. I had, over the years, maybe 30 to 40 graduate and undergraduate students and post-docs who worked on a variety of fundamental research projects. They learned a lot from these projects and became contributing members to many of the organizations where they are now employed.

The third aspect that’s equally important is funding. Funding for my research has come from a variety of sources, not only from the universities where I worked but also from the federal and state governments. I must say that Texas is the best state to pursue cancer research due its generous CPRIT program. I am truly grateful for the support I received since I arrived here in Houston in 2011. My lab now has ambitious plans to address neurotoxicity of cancer drugs that prevents many patients from enduring treatments.

Millions of dollars went into the various projects I have worked on over the years. I’m lucky that aside from gaining fundamental knowledge and training future generations of scientists, a potential product came out. I see the payoff in two different ways—not only is there a potential societal benefit, but there also are the benefits to those students and post-docs I trained who have become scientists and physicians. They are continuing to do their public service to society.

Q | What advice would you give to other aspiring entrepreneurs or innovators?

A | I really don’t give advice, but since you asked, there were many signs of failure, there were many roadblocks that came along the way. At times I felt it would have been easy to give up and move on to something else. I must say that our peers often are not encouraging to test ideas that are outside the box. Many others have predicted and are still predicting that I would fail. For example, for many years now I have believed that you don’t need to deliver the drug to the exact cancer sites or organs but can disable the genes that cause the cancer and activate the genes that suppress cancer growth or kill cells. Anyhow, I was determined not to give up and so I stuck to it. So the only advice I have is that if you believe in something and if you have a sound scientific ground that it might work, just stick to it.

As I said, there are times that I thought I should quit this particular research and take an easier route to enjoy. I had a potential job offer from a much larger research university than the University of Houston, and the condition was that I would have to give up my research to take the job, so I declined and I’m glad I did.

Q | What drove your determination?

A | Mostly it is the human suffering. If you look at the distribution of cancer patients all over the world, 40 percent or more of cancer patients are in Asian countries. And their annual income isn’t enough to even get a chemotherapy treatment for a month. We live in the western world and we’re fortunate and privileged to have a lot of resources, including excellent health care and delivery infrastructures. We have health insurance, we can seek excellent treatment options, and many patients do live longer. Some of them die, but not because of a lack of treatment. But in Asian countries, my guess is that 90 percent of people die because of lack of treatment. They can’t afford it.

I was born and brought up in Bangladesh and that really drove me to see this to its end. To see if we can get something going that will really impact the world. And since 2010, I have had a different motivation. Sad, but it’s a different motivation. My mother had cancer and she passed away within a month of being diagnosed. I knew that she had only a limited number of days. She had a form of leukemia–AML. There are two major forms of leukemia–CML and AML. CML has a routine treatment nowadays, but AML does not. Unfortunately she had AML, and as soon as I got a phone call from one of my younger brothers from Bangladesh, my daughter and I flew over there within a few days, and we spent some time with her at the hospital. But I knew it was a matter of weeks, and she passed away.

So I know that there are specific types of cancer where we don’t have much hope and seeing my own mother dying and feeling helpless was horrible. Finally, my father, who was a physician, wanted me to pursue a medical profession, but I disappointed him by not attending a medical college. I promised him that I’ll do my best to make an impact not only in Bangladesh, but maybe elsewhere.