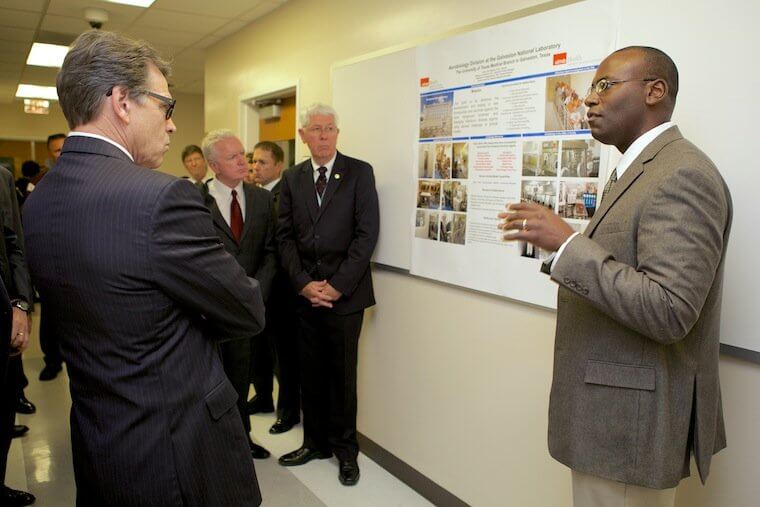 Texas Gov. Rick Perry today named The University of Texas Medical Branch as one of two official Ebola treatment and infectious disease bio containment facilities in Texas. The other facility will be created in North Texas by a partnership between UT Southwestern Medical Center, Methodist Hospital System and Parkland Hospital System.

“We are fortunate to have such talented and dedicated leaders here in North Texas, and at UTMB Galveston, who are willing to step forward during a time of need,” said Perry.

This announcement comes four days after a first round of recommendations were released by the recently formed Texas Task Force on Infectious Disease Preparedness and Response. The task force is led by Brett P. Giroir, M.D., CEO of Texas A&M Health Science Center. Designating specific hospitals as Ebola treatment centers was the first item on the list of recommendations, with UTMB offered as a suggestion.

“As a state designated Ebola Treatment Facility, the hospital would be equipped to provide highly specialized infectious disease care,” reads the letter, signed by Giroir, “including but not limited to: infection control and protection of health care workers, decontamination, waste management, complex early stage experimental therapies, and a myriad of coordination and  communication capabilities with local, state and federal partners.”

UTMB was also recently placed in charge of disposing of medical waste from Ebola patients in Dallas. UTMB President David L. Callender, M.D., responded to UTMB’s inclusion as an official facility, saying, “I have every confidence in our abilities to provide the highest level of care, and we are proud that the governor has placed this trust in us as well as UT Southwestern, Methodist and Parkland.”

Next up for the new task force is a hearing to be held at the Texas State Capitol in Austin Oct. 23.