Exploring the depths of the human heart

Exploring the depths of the human heart 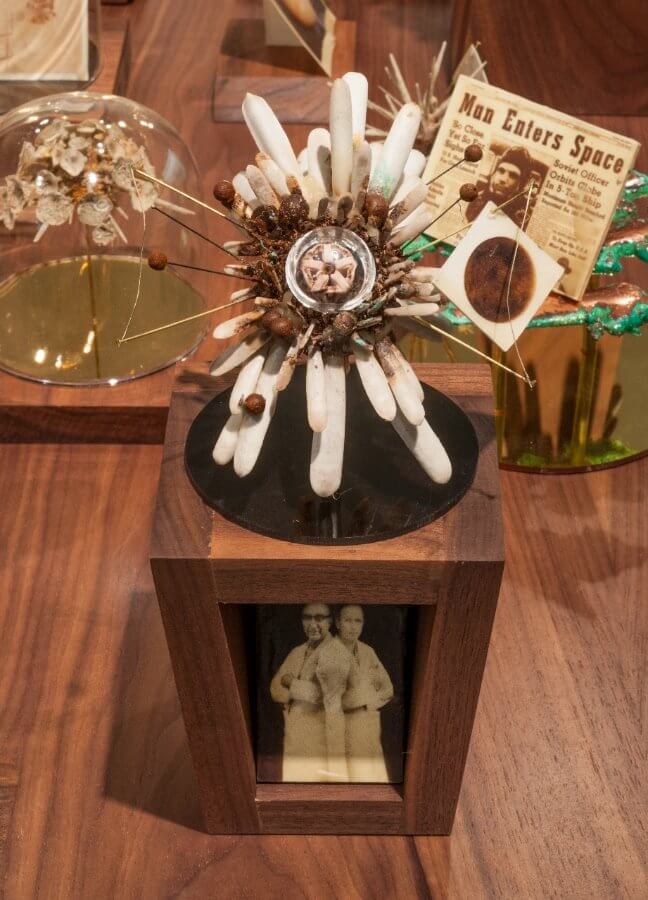 Drawing upon years of extensive research, local conceptual artist Dario Robleto has crafted a multilayered exhibition that uncovers many previously untold stories about a subject that has rattled the minds of mankind since the beginning of time: the mysteries of the human heart and how its history parallels with the human desire to understand the depths of the sea and the edge of the solar system.

Commissioned by the Menil Collection and the University of Houston’s Cynthia Woods Mitchell Center for the Arts, Robleto’s exhibition, “The Boundary of Life is Quietly Crossed,” will be presented as both a site-specific installation at the Menil and a series of public programs which detail the artist’s discovery process.

Leading up to the inception of this project, Robleto was most recently an artist-research fellow at the Smithsonian Institution in Washington, D.C. During his fellowship, Robleto focused his interests on the Liotta-Cooley heart, the first successful artificial heart that was implanted in Houston in 1969.

As he studied the revolutionary device, Robleto began digging up everything he could find on the history of the artificial heart and wondered what scientists had achieved since then. By chance, Robleto found his way into contact with the world famous cardiovascular surgeon O.H. “Bud” Frazier, M.D., who contributed greatly to the Liotta-Cooley heart and the improved models that succeeded it.

“It was a complete coincidence,” said Robleto. “I had taken an image of the Liotta-Cooley heart and emailed the image to a local collector friend of mine whose wife happened to be good friends with Frazier. Frazier didn’t know anything about me, but he wrote me a message saying, ‘Did you realize I worked on that heart?’ I knew he had worked under Cooley as a younger surgeon, so I was amazed. He said, ‘Whenever you get back, if you’re interested in seeing a heart transplant, let me know.’”

As soon as Robleto got back from the Smithsonian, he took Frazier up on his generous offer. As he looked on at Frazier performing the transplant surgery, Robleto said the experience was “breathtaking.”

“The moment that stuck with me was seeing the emptiness in the man’s chest,” said Robleto. “As amazing as all the other steps were, when Frazier actually pulled [the heart] out and set it on a cart, and there was that moment before the new one came in, there was this vacuum in the man’s chest. As a sculptor and someone sensitive to materials and space it was absent, empty and yet so full. The philosophical implications and meanings of that moment made it feel like the whole room was orbiting around that hole in his chest. It’s a space that does not exist on the planet unless humans have made it happen.”

Because of the profound impact that the experience had on Robleto, he wondered what Frazier, a man who has performed more than 1,200 heart transplants, felt in that moment.

“Not that [heart transplantation] would ever get normal, but I still wonder what he thinks every time he sees that absence there,” said Robleto. “The whole point I try to argue is that artists have to be involved in these moments because we’re going to see something a little different and we should be talking to each other about what we’re both seeing.”

As he set out to have more conversations with experts who could help him in his research, Robleto was fortunate to meet Patrick Feaster, a sound historian who has been a driving force in recent breakthroughs in resurrecting early sound recordings from visual tracings, a technique used prior to the invention of playback technology in 1877.

Adding another dimension to his artwork, Feaster collaborated with Robleto in his research by converting old visual tracings of the earliest recordings of the human heartbeats into sound, marking the first time in history that these sounds have been made audible. In his installation Robleto incorporates detailed narratives to go along with the recordings.

“It’s always a startling achievement when new pathways to the past are discovered,” said Robleto. “These sounds have been lying dormant for over a century and this exhibition marks the first time that a 19th century heartbeat has ever been heard.”

As Robleto continued his research and looked into the history of a more recent era, he was introduced to Ann Druyan, an author and producer who is best known for her work for the series “Cosmos,” hosted by her late husband Carl Sagan.

Through their conversations, Robleto learned the story behind Druyan’s contribution to the famed Golden Records that were put on board the Voyager 1 and 2 spacecraft. The records were created with the hope and intention that one day intelligent life would be able to find them and interpret them. In these records were recordings of greetings in multiple languages, natural sounds and music. There was also a recording of something very unique and personal— an EKG and EEG of Druyan were recorded just days after she and Sagan secretly became engaged.

“As an artist, I think that what she did was one of the most beautiful art acts,” said Robleto. “What Ann did was as much art as it was science. For many years, I’ve had an interest in her story and have engaged with her EKG and EEG as a sound recording.”

These conversations are just some of the many fascinating pieces featured in the exhibition. From conducting interviews with various doctors and patients at the Texas Heart Institute, to scoping out the rare collections of the Menil and Rice University archives, to meeting with scientists from NASA and the University of Houston, Robleto has a wealth of information to share and engage his audience with his public programs and installation.

“Robleto is doing something truly unique,” said Michelle White, curator of the exhibit. “The collision of art and science is something we’re all interested in. We’re all talking about it and interested in this notion of interdisciplinary work. Robleto is not an artist responding to science. He’s not making a beautiful picture representing his awe with the cosmos; he is participating in the creation of knowledge alongside the scientist and doctors he’s working with.”

“Talking about the heart is a really scary thing because I think it seems that everything has been said and what else could possibly be said without going down a road of clichés?” said Robleto. “As an artist, I like that challenge. If you can tap into a subject that seems impossible to say anything new about, then the reward is even more exciting when you do find something. I think as an artist I am continuously interested in asking questions, doing my homework to find the right people to ask these questions to and finding that they can’t always provide answers to them all. That’s why I think we need to have artists involved. I definitely want to keep those conversations going.”