The Battle Within: America’s Veterans Work to Heal the Invisible Wounds of War

The Battle Within: America’s Veterans Work to Heal the Invisible Wounds of War 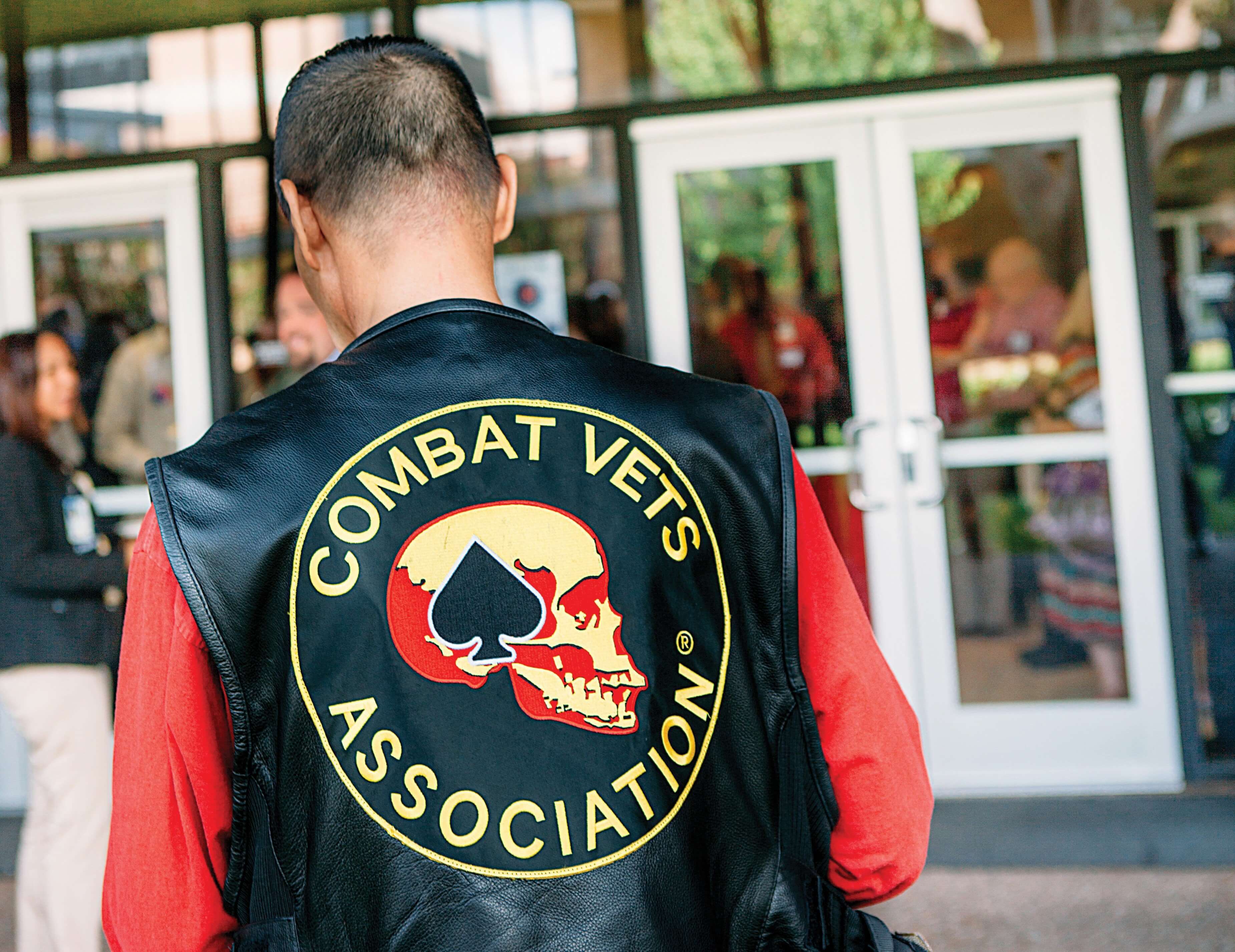 In the wake of the United States’ longest combat operations since Vietnam, many service members return home with invisible — but no less devastating — battle scars. Research demonstrates that veterans deployed in Iraq and Afghanistan may experience mental and behavioral health needs that compromise their successful return to their families and their communities.

“As service members, we’re programmed to accept everything that’s given to us and not really ask for help, even when we need it,” said Staff Sgt. Jamie Meza, a National Guardsman who was deployed to Iraq for 14 months from 2006 to 2007. “It took me a while to accept that I needed help and to recognize my own pride, because when you come back from deployment you really feel like you’re under a microscope—everyone wants to be around you because they missed you, but you also get the sense that they want to see if you’re visibly different. It’s very easy to put on this mask and let your exterior show that you’re okay, when really you’re not.”

Over 200,000 military veterans live and work in Houston and Harris County, making it home to one of the largest populations of military service members and families in the nation. Against the backdrop of this population, addressing the behavioral health needs of returning veterans in our own backyard is essential. According to a 2009 study from the RAND Corporation, one in five veterans returning from deployment in Iraq and Afghanistan meet the criteria for depression or post traumatic stress disorder (PTSD), yet only half of them have received mental health care.

“We’re discovering that so many veterans are being diagnosed with traumatic brain injuries because this war is unconventional, and the amount of IEDs [improvised explosive devices] that we’re exposed to and the amount of fire that we’re exposed to really affects our brains and the way that we think cognitively,” explained Tony Solomon, director of the Veterans Behavioral Health Initiative for Mental Health America of Greater Houston (MHA). “Often times, it doesn’t manifest itself until three to five years afterwards, so a lot of these diagnoses for traumatic brain injury and PTSD may come at a later period in time, when these veterans may be in school or at work. Soon, they’re able to discover that they might have not only some mental health issues, but cognitive and functional issues, as well.”

Compounding the issue, families of service members frequently do not have adequate community support. Ninety-four percent of military families feel that the non-military community doesn’t have the capacity to understand or appreciate the sacrifices that they make, based on a survey conducted by Blue Star Families, the largest chapter-based military families support organization in the country. For Bryan Seymour, who served in the Marine Corps from 2003 to 2007, that experiential divide between perspectives made transitioning back into civilian life incredibly challenging. “You change from being with your family, the family that you’ve been with every day, to people that don’t really know you — they can’t know you,” he said. “Being in the military, you all get to know each other really closely, whether it’s over the course of 24 hours or 24 months, and coming out of that environment, you’re forced to enter situations where you’re surrounded by people who can’t appreciate your experience.”

In spite of the obstacles facing veterans and active service members returning from deployment, with the aid of peer support, community engagement, targeted assistance and outreach and increased access to available mental health services, the potential for veterans to thrive in their community and reintegrate with their loved ones is boundless. “I was in the presence of so much change and so much transition, and it finally came to a point where,
as much as I thought I could handle it on my own, I just could not deal with it anymore and I wanted to be a better person for my son and for myself,” said Meza. “It was at that point that I needed to ask for help, but first you have to acknowledge that you need help. Don’t be so prideful that you think you can take it all on, on your own, even if you want to. You’re only human and you can only take so much. It takes courage to reach out and ask for help.”

In an effort to better address the range of mental health care needs of veterans and their families, Mental Health America of Greater Houston joined forces with the Michael E. DeBakey VA Medical Center (MEDVAMC) for the second annual Veterans Mental Health Summit. Designed to enhance and establish relationships between the MEDVAMC and community partners throughout the Southwest region, supporting coordination of recovery-based care between the VA and their community partners will be invaluable in properly supporting returning warriors. The 2014 Veterans Mental Health Summit is a collaborative community event, organized by the Michael E. DeBakey VA Medical Center, City of Houston-Office of Veterans Affairs, Mental Health America of Greater Houston, Gulf Coast Center and Hope for the Warriors.

“Our most valuable resource is, of course, our staff,” said Laura Marsh, M.D., head of the Mental Health Care Line at the MEDVAMC. “We have a very large program at our VA in Houston that covers a broad swath of services. Each of our sites provides general psychiatric care, with clinicians who are embedded in primary care, in order to address shorter-term problems, but we strive to provide a continuum of comprehensive services.”

Serving as the primary health care provider for almost 130,000 veterans in southeast Texas, the Michael E. DeBakey VA Medical Center treats veterans from throughout the county who are referred for specialized diagnostic care, radiation therapy, surgery and medical treatment. Understanding the complex relationship between emotional illness and medical illnesses, the MEDVAMC is home to a general mental health clinic, PTSD clinic, substance dependence program, and psychosocial rehab and recovery program while also demonstrating a commitment to a variety of research programs that intersect with clinical care.

“Unfortunately, there’s still a huge stigma associated with mental health,” said Solomon. “With warriors in particular, we’re taught to fight and never show pain. So many of these men and women who have served have been deployed four, five or six times, and when you’ve been exposed to that amount of violence and trauma in life, it will affect you and it will change you and influence your professional and personal relationships.”

“What people tend to think, on a national level, is to simply throw money at a problem, but individual communities have the privilege of serving military families,” he added. “Every community is different—especially out in rural communities, where employment is a major issue and veterans aren’t always able to secure good employment, and outpatient clinics might also be limited in terms of their mental health services. The VA has adjusted accordingly to provide telemedicine and exchange medical information electronically, and the state has filled in some of the gaps with an increasingly expansive military veteran peer network. We’re really focused on peer outreach and using veterans that have successfully transitioned to connect military families with state, local and national resources, accordingly.”

T’Liza M. Kiel, veteran volunteer coordinator for Veteran Support Services at the Gulf Coast Center and a veteran herself, believes that veterans are much more likely to broach the potentially turbulent waters of mental health issues with other veterans. “Peer support is so important because you’re dealing with cultural differences,” she reflected. “You’re more apt to opening up to someone who is familiar with your personal experiences, even before you open your mouth to begin to talk about it. From a personal perspective, it’s been a year since I came out of the military, and even after coming on and being able to take this position, it wasn’t until earlier this year that I actually went to the VA to talk to someone—volunteer coordinators and support groups haven’t just been a benefit to the community, they’ve been a benefit to me, as well.”

In addition to cultivating a network of solidarity through peer-to-peer support, providing services for the entire family is an essential element of recovery. “Families are a part of everything, from deployment to the transition and reintegration of service members—addressing their individual needs will also benefit the family as a whole,” said Chrystal Thompson, community development coordinator for Hope for the Warriors, a national nonprofit organization dedicated to enhancing the quality of life for post-9/11 service members, their families, and families of the fallen. “We have services and programs for all branches of the military, as well as for spouses, and we’re looking to incorporate more programming for military children. At the end of the day, they’re not always the ones who are at the forefront of discussion, but they’re the ones that have been in the action from the beginning.”

For Donald Bay, who joined the Marine Corps in 1960 and retired in 1995 as a master gunnery sergeant, the decision to seek treatment would do more than sculpt the course of his future — it may well have saved his life. “I retired in January, and on the first day of April I checked myself into a program,” he recalled. “I truly needed that because my wife said I was institutionalized, and I was. The best day of my life was when I came into the VA program. It’s been hard but it’s also been fair — nobody’s promised me anything, and everything I’ve achieved I’ve had to work for. If it weren’t for the help I received, I would probably be dead.”