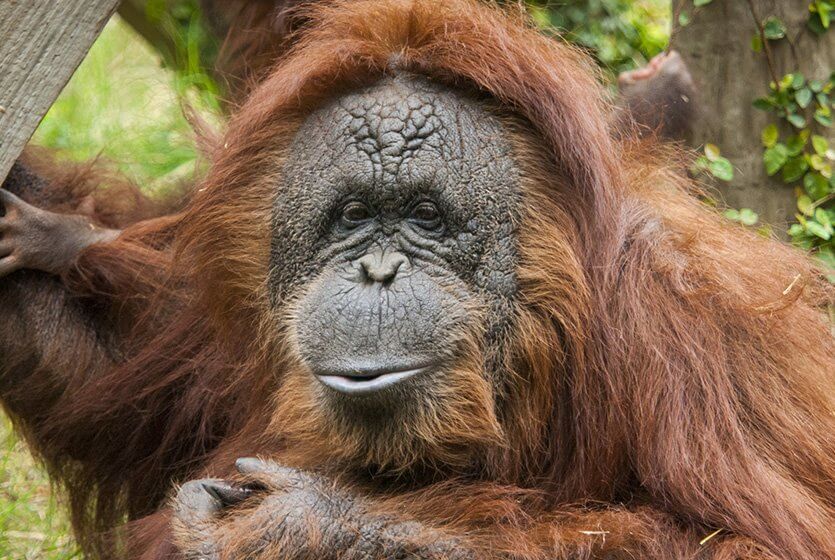 Texas Medical Center offers patients some of the best specialists in the world. Most of those patients are ordinary humans, but when a Houston Zoo orangutan exhibited signs of serious illness, the zoo’s veterinary staff turned to the world-renowned specialists right across the street.

The collaboration began with an alert from zookeepers – Cheyenne, a 42-year-old orangutan, had been lethargic for a few days and was not eating or drinking normally.

“For the first week-and-a-half we treated her how we would treat any other animal,” clinical veterinarian Lauren Howard, DVM, said. When Cheyenne did not respond to that treatment, “we began to realize there was probably something serious going on.”

That’s when Dr. Howard and the Houston Zoo made a call to the Medical Center. Venkata Bandi, M.D., was one of several doctors who answered that call.

Bandi is the director of critical care at Texas Children’s Pavilion for Women and associate director of the Medical Intensive Care Unit at Harris Health System’s Ben Taub Hospital. He had never treated animals before, but his reservations were allayed by primates’ similarities to humans.

“The laboratory values are somewhat similar to the human values and the organ system function [is] the same,” Bandi said. “In fact when I reviewed the ultrasound images, they are very similar to what we see in human ultrasounds.”

After abdominal surgery failed to reveal what was wrong with Cheyenne, additional blood testing discovered several abnormalities: Severe dehydration, muscle and organ damage, and evidence of an infection.

“We had to provide IV hydration, glucose and close monitoring of her electrolytes and renal function, given the acute kidney injury,” Bandi said.

Delivering those fluids to an orangutan came with some unique complications.

“[Orangutans] are very intelligent but we can’t tell them, ‘Don’t pull the catheter out,’” Howard said.

In order to prevent Cheyenne from pulling on the IV, the doctors had to put a cast around her entire foot, along with a six-foot flexible tube to protect the IV line. Zoo staff took turns sitting with Cheyenne overnight to make sure she was comfortable.

Cheyenne remained connected to the IV for several weeks, during which she was monitored by Bandi and the other physicians.

“Dr. Bandi was an amazing resource for us to help keep Cheyenne on that narrow precipice between too much and too little fluid,” Howard said. “Without Dr. Bandi I don’t know if we would have been able to pull her through this.”

“What I was most impressed with was the dedication, focus and attention Cheyenne received from her veterinary medical team,” he said. “I was glad that I had the opportunity to interact with a wonderful team of physicians and caregivers for these animals – my hat’s off to their dedication.”

Cheyenne is doing well post-treatment. According to Bandi, her prognosis “should be excellent.” She was reunited with her adopted daughter, Aurora, and her activity level and appetite are back to normal – great news for the zoo staff who have cared for Cheyenne since her 1993 arrival in Houston.

“She has not reproduced and had babies of her own, but she’s a very good mom,” Howard said of Cheyenne. “She’s adopted several orangutan orphan infants and she’s made a massive contribution to orangutan species survival.”

Now thanks to the contributions from Texas Medical Center doctors and zoo staff, Cheyenne can continue caring for younger generations of Houston’s orangutan community.