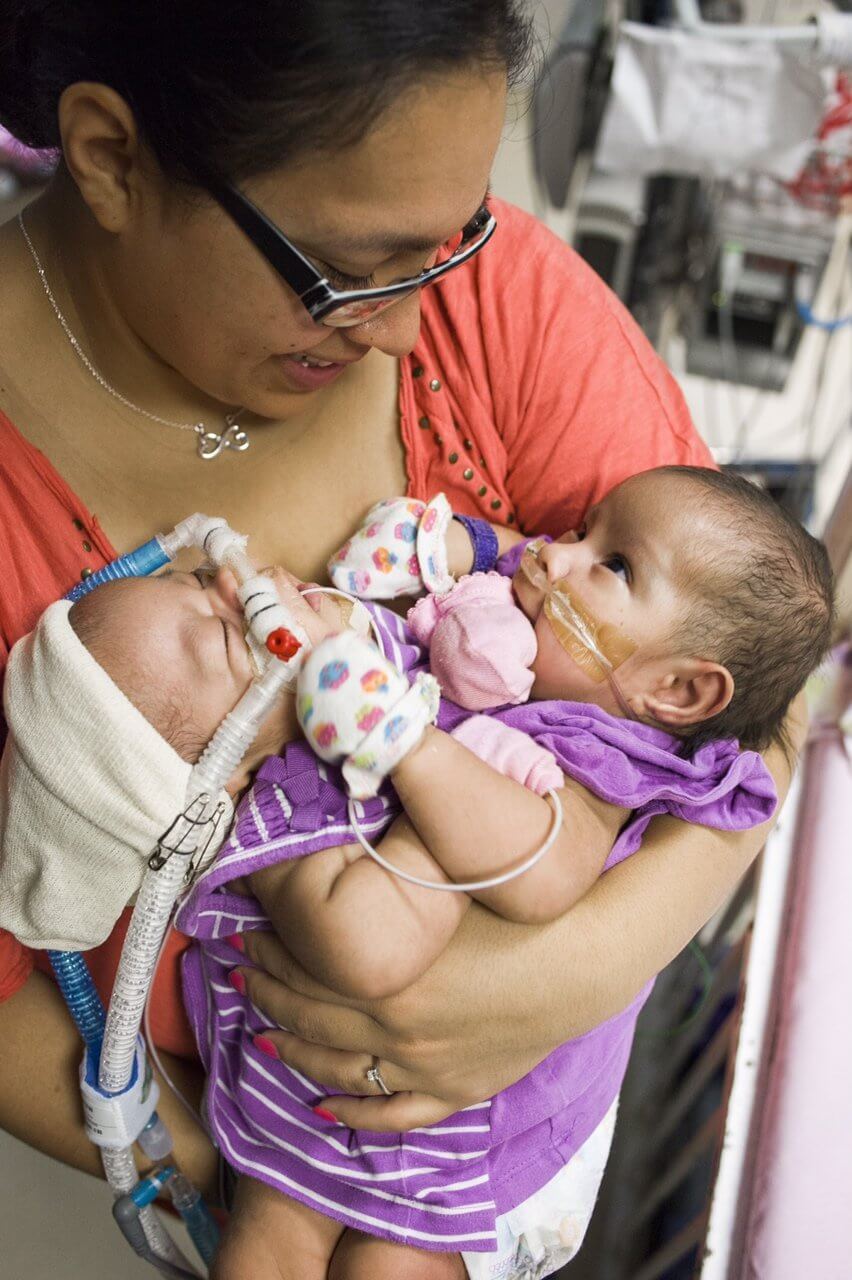 Seeing more than one baby during an ultrasound is always a surprise for expecting parents. For Elysse and John Mata, that feeling was intensified by an even more shocking discovery. During a routine ultrasound Jan. 13, Elysse was told she was carrying twins — and those twins were conjoined.

The Matas, who live in Lubbock, Tex., were subsequently referred to Texas Children’s Fetal Center where they underwent extensive testing and specialized prenatal care and developed a strategy for the twins’ birth and postnatal care.

In the early hours of April 11, when Elysse was 31 weeks pregnant, Knatalye Hope and Adeline Faith were welcomed into the world via Caesarean section. The twin girls share a liver, diaphragm, intestines, and pericardial sac, or the lining of the heart.

Conjoined twins are a rare occurrence. Stephen Welty, M.D., chief of neonatology at Texas Children’s Hospital said the Matas are only the third case he has seen in his career of over thirty years. Some estimates suggest conjoined twins occur as seldom as once in every 500,000 live births.

Next up for Knatalye and Adeline is separation surgery, though Texas Children’s doctors are in no rush to take the girls into the operating room. So far, Welty said, there are no complications dictating when the surgery needs to happen, which means doctors can wait for the twins to develop further.

“I think the surgical crew is going to wait to somewhere between 6 and 8 months to do the separation,” Welty said. Currently the twins are between four and five months old. Doctors are giving the girls time to gain weight and to allow their organs to mature, which will make them better equipped to undergo major surgery. The twins currently weigh about 11 pounds each.

“The big goal is to get them great nutrition and great developmental care and get them big enough so that the very complex surgery can happen,” Welty said.

Conjoined twins may have been an unexpected curveball for the Matas, but so far they are taking everything related to the girls’ care in stride.

“I’m amazed at how well they’ve tolerated this and how optimistic they are and how cheerful they are,” Welty said. “It’s not easy, but they’ve coped with this extremely well.”

When the time comes to separate Knatalye and Adeline, the family will likely lean on the words that inspired the girls’ middle names: Hope and Faith.

“If it goes as well as I think it will,” Welty said, “I think they have a chance to lead a very normal life in all aspects.”