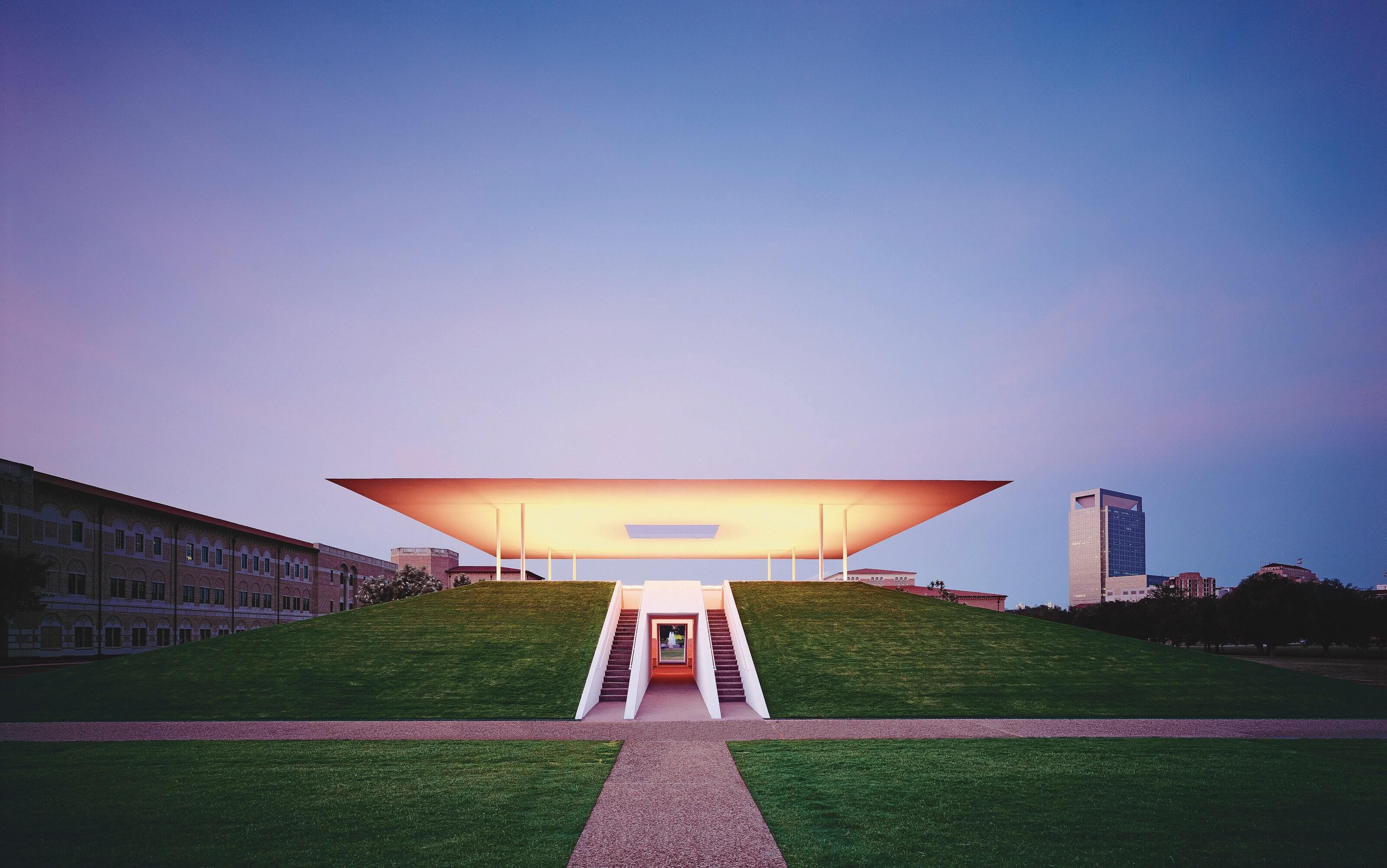 Thoughtfully crafted to be more than just a beautiful piece of art on Rice University’s campus, the James Turrell “Twilight Epiphany” skyspace offers visitors from all over the world a chance to participate in a contemplative, awe-inspiring experience.

The skyspace is one of Turrell’s largest public installations and is comprised of a two level, pyramidal structure that is designed to seat up to 120 people. The optimal viewing time occurs each day during sunrise and sunset when carefully conducted light performances fill the space with vibrant colors in accordance with the movement of the sun.

“When people come and visit the skyspace for the first time and walk out after they’ve experienced a light sequence, they have this sort of euphoric feeling,” said Emily Stein, assistant director of Rice Public Art. “They enjoy it and they’re mesmerized by it and they just want to understand it more.”

Turrell, the artist behind the skyspace, is known for his immersive art installations. A pioneer in the Light and Space art movement, he was recently awarded the National Medal of Arts following a three city retrospective tour held in 2013 at the Los Angeles County Museum of Art, the Museum of Fine Arts Houston (MFAH), and the Guggenheim. His work explores the effects of sensory deprivation, the psychology of perception and what it means to come into the light.

Houston is fortunate to have more public installations by Turrell than any other city in the United States. In addition to the “Twilight Epiphany” at Rice, other local works of his include “The Light Inside” tunnel at the MFAH, and the Live Oak Friends Meeting House in the Heights. Over the course of his 40-year career, Turrell has created over 80 skyspaces in 25 different countries.

“Turrell’s work is groundbreaking,” said Stein. “Anyone who has experienced one of his installations understands that his work is moving in a way that art should be. It taps into a level of emotion that artwork really should stir within you. I think it was long overdue for Turrell to receive such a high honor [as the National Medal of Arts].”

At Rice, his installation is unique in more ways than one. Commissioned through the aid of a generous alumna, Suzanne Deal Booth assisted the artist during the early days of his career in
the 1980s. Booth played a direct role in helping Turrell build his first skyspace at the Museum of Modern Art PS1. She maintained a friendship with the artist throughout his career and was excited to commission the artist to envision a skyspace for Rice as part of the university’s pledge to provide great artwork that is truly accessible to the public, through the Rice Public Art program.

Built to be enjoyed by both students and the large flow of visitors from Houston, the skyspace is much larger than Turrell’s other spaces. Most of Turrell’s commissioned skyspaces are small and intimate in size, with a seamless view between the walls and the opening to the ceiling. The “Twilight Epiphany” skyspace is large enough to fit 120 people, and has an open air viewing deck on the upper level that allows visitors to see beyond the skyspace and look at the other buildings at Rice and the nearby medical center.

Additionally, the skyspace was acoustically engineered to create a space for interdisciplinary art and collaboration for Rice students at Shepherd School of Music. The school hosts musical performances throughout the year, both during the daytime and in the evening after the sunset light sequence. As an added gift to the students, Turrell composed a unique light sequence for the Rice musicians, to accompany their performances.

“What I love most about this space is that it inspires everyone,” said Stein. “People who do not have an artistic background, or who don’t really consider themselves art lovers are inclined to want to learn more about art and to understand what sort of experience they just had. It’s an emotional experience and it’s a different experience for everybody.”

The installation is open to the public six days a week. Admission to the space is free, and reservations are only required for the light performances at sunset.