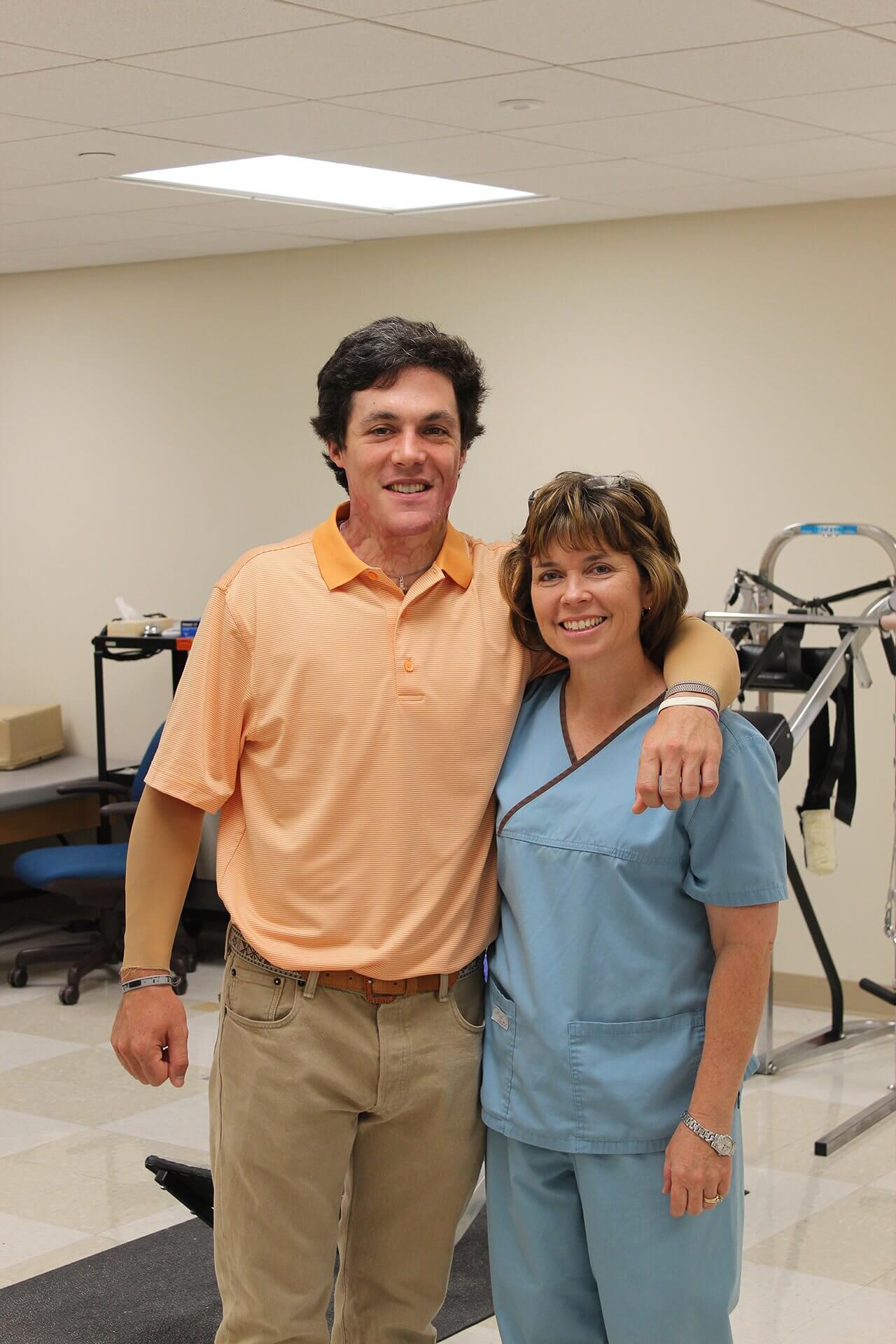 James Burke remembers very little about the accident. He knows it happened on November 2, 2013, and remembers hanging out with his best friend at his parents’ house before he felt a seizure coming on. He can recall leaving the room to get his medicine from the kitchen, but after that, everything went blank.

“They told me that I’d fallen into the gas stove and my T-shirt caught fire. There were third-degree burns on over 45 percent of my body,” Burke recalled. “At first I was in shock. It was difficult to process all at once.”

A geophysics student at the University of Houston, Burke had grown accustomed to injury by his college years. Growing up, he’d been hurt numerous times playing sports, including getting hit in the head with a fastball during a baseball game, and at one point he was briefly paralyzed after a knockout at football practice. In fact, when he began having seizures at age 17, his physicians looked at those head injuries, which he’d suffered during stages of critical brain development, as possible contributing factors.

In the years that followed, Burke’s seizures grew dramatically, increasing in both frequency and severity. He began suffering secondary injuries during the episodes, mostly from falls. He’d fallen down brick stairs, through a glass store front and once into a lake at a golf course. But he made it through all of them, and after waking up in the burn unit, he was determined that this time would be no different.

“The whole experience has really made me think about how much everyone takes life for granted,” Burke said. “You want to know the best part about all of this? I woke up – I’m here. I was critical, but I made it through. I’m lucky my face and hands aren’t burned. And I figured, I could sit here for two months and have a terrible time, or sit here for two months and make the very best of it. No matter what the situation, things could always be worse.”

That optimistic attitude, according to Burke’s occupational therapist Kimberly Walker, OTR, is the reason he’s made such a strong recovery.

“He’s been a wonderful patient because he is so motivated,” Walker explained. “He always finds the positive in everything. Burns are extremely painful, and patients find it hard to be motivated when they are in that much pain. But he’s an exception to that rule – he hasn’t let the pain interfere with his recovery, and he’s made remarkable progress.”

Burke has come a long way since being transported by ambulance to the Emergency Center at Memorial Hermann-TMC where he was triaged, intubated and then transferred to the burn unit. He was placed under the care of a team of clinicians comprised of specialized nurses, therapists and physicians, including Daniel Freet, M.D., plastic surgeon affiliated with Memorial Hermann-TMC and assistant professor of plastic surgery at UTHealth Medical School, who performed Burke’s multiple skin graft surgeries.

“James sustained a very substantial burn injury, one that could have been lethal,” Freet said. “He was under our care for an extensive period of time and faced a long road to recovery, but he came through it with flying colors and is doing extremely well because he’s worked so hard – most of his success is through his own diligence. He was highly motivated even through all the pain from the skin graft surgeries. He really did the work to get himself better.”

While Burke acknowledges that his recovery has been anything but easy, he insists that he owes his success primarily to his caretakers.

“The only reason I’m alive is because of the hard work put in by my doctors, nurses, techs and therapists. I wouldn’t be here without everything they’ve done for me,” he said. “There’s a saying in the burn unit that goes, ‘If it doesn’t hurt, then you’re not doing it right’ – that’s really helped me put my pain into perspective. The pain meant that I was doing what I needed to be doing to get better, so I had to just put mind over matter and get through it. I remember that whenever my nurses would take my bandages off, I’d tell myself that I was going to endure this pain one step at a time, that I’m going to endure it knowing that I’m lucky to be alive, that all of this is helping me to live a better life in the future.”

Burke’s courage and hard work paid off – and not just for his own benefit.

“Our other patients see him as an inspiration – they see the extent of his burns and how far he’s come and they think, ‘I can do this, too,’” Walker said. “To this day he still comes in early for his appointments and socializes with the other patients. He likes to get a sense of how they’re doing, how they’re coping, and he’ll give them little motivational talks.”

Burke says that ever since the accident, he’s wanted to give back in whatever way he can. “My attitude changed after getting burned. I realized that I’m not here to just think about myself, I’m here to help others. Whenever I visit other patients, my goal is to always try to make them smile. I want everyone with a disability to feel confident and not shield themselves from others. If you just sit in bed and think about how bad life is, you aren’t going to go anywhere. No matter what you’re dealing with in life, you have to accept it and move on.”

And Burke has done just that. He is now back in school full time, keeping busy with his studies, social life, and squeezing in golf games whenever he can.

“His will to live and return back to his life has inspired all of the staff,” said Stephanice Stephens, RN, B.S.N., clinical manager of the John S. Dunn Sr. Burn Center. “James looked at every challenge as an obstacle and never as defeat, no matter what the situation. His entire family was unconditionally supportive and appreciative, and I think that had an enormous impact on his spirit, and it helped all of us feel supported and motivated as well.”

“It’s wonderful to see James back to living his life,” Walker added. “As therapists, we become close to our patients and we want them to have an optimal recovery. Working with James has motivated all of us. I can tell you that, personally, working with him has inspired me to continue to raise the bar of my expectations in being the best clinical practitioner I can be.”

Looking toward the future, Burke says he doesn’t want anything to limit what he’s going to be or do. “It’s just better to be happy than to be sad, to live in the now than in the past,” he said. “Getting burned was obviously a life-changer, but wasn’t a change for the worse. Some people look back on a day like that and think that’s the worst day of my life, but I think it’s just another day in my life. Sure, I got burned and went through numerous surgeries to help repair my body, but I’m repaired. I’m breathing. It feels good regaining all of the skills and basic movements that I took for granted. When I got burned, people would always say ‘I feel so sorry for you and I’m sure you went through a lot of pain,’ but I had a good time in the hospital. I can honestly say that I found myself in those rooms.”