Teach a Man to Fish

Teach a Man to Fish 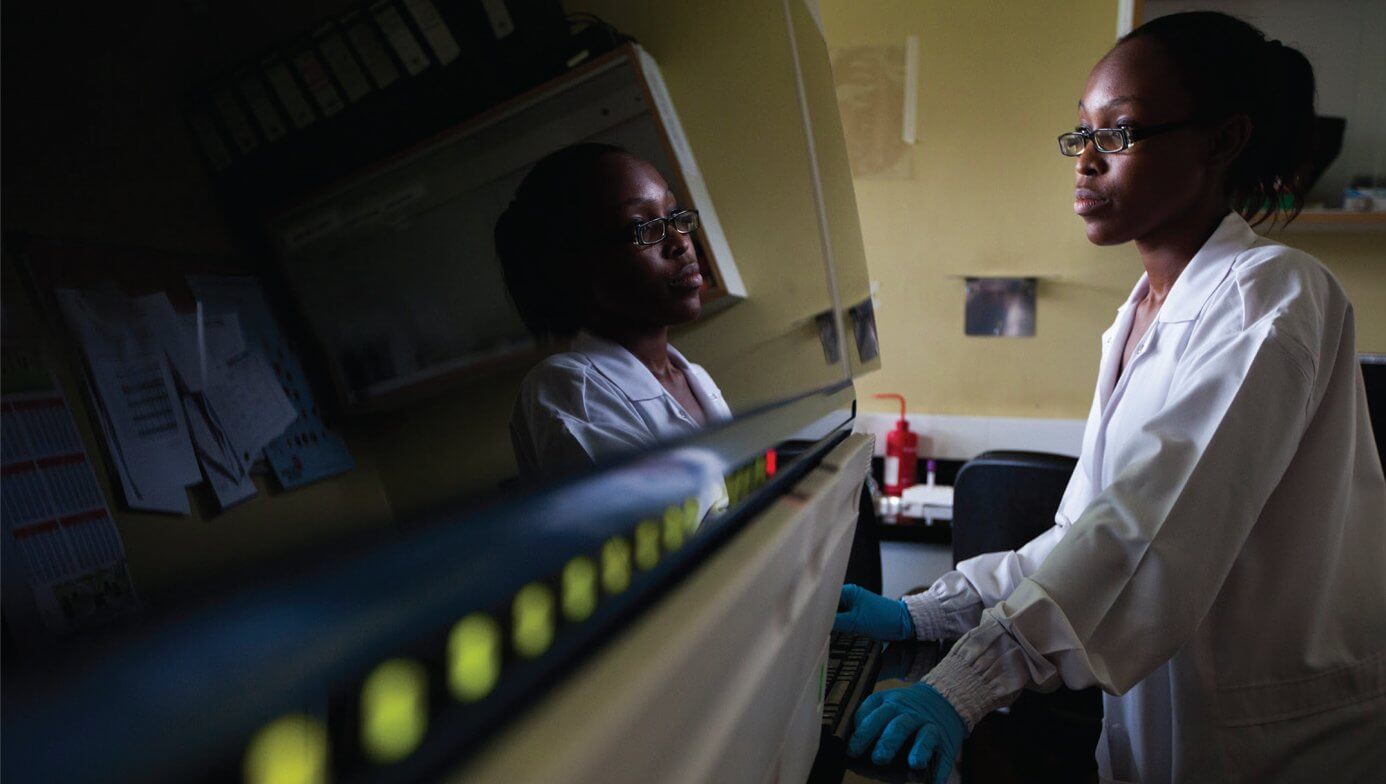 The Human Genome Project, a 13-year project initiated by the National Institutes of Health (NIH), the Department of Energy and others, gave researchers an unprecedented understanding of DNA and the sequencing of genomes. It helped develop new technologies for genomics research, and the role that research can play in treating, curing and preventing disease in populations worldwide. To date, the project has led to the discovery of more than 1,800 disease genes.

In 2009, twenty years after the Human Genome Project was first proposed, the African Society of Human Genetics, NIH, and the Wellcome Trust, met in Cameroon to discuss issues surrounding genetics research in Africa. One issue of concern was the fact that the continent’s genetic research was not keeping pace with the rest of the world, despite the tremendous need.

Out of the Cameroon meetings emerged Human Heredity and Health in Africa (H3Africa), which seeks to study the connection between genetics and disease susceptibility and treatment in African populations. The multi-institutional effort houses the Collaborative African Genomics Network (CAfGEN), led by primary grant awardee Botswana-Baylor Children’s Clinical Centre of Excellence (COE). CAfGEN and the other centers and projects under H3Africa aim to build a sustainable genomics research presence in Africa, beginning with training and infrastructure.

“The whole problem is that the disease burden in the world is the complete opposite of where the majority of genomics research has been con- ducted historically. There is a massive imbalance,” explained Graeme Mardon, Ph.D., professor of Molecular and Human Genetics at Baylor College of Medicine and a co-principal investigator of CAfGEN.

Mardon adds that for many decades, foreign researchers have typically conducted studies in developing countries by taking patient samples from African participants and then conducting the research in labs in the U.S. and Europe, with little scientific acknowledgment or transfer of expertise to the people in Africa. This, he says, is no longer a tenable model, and is something that the governments of African nations are actively opposing.

“They want to do the research themselves,” he said, “on their own people, for the diseases that are affecting their people.”

Genomics, the study of how a person’s genes interact with each other and the individual’s environment, holds promise for the treatment of complex diseases those that are most likely a result of both genetic and environmental factors. If researchers are able to identify the genetic basis for the progression of HIV/AIDS in Africa, there is a greater chance of finding targeted treatments and therapies for the affected population.

“For kids, when the mother is known to be infected, there is a certain probability that she will pass that on to her child,” said Mardon. “So when the child is born HIV positive, they immediately begin antiretroviral therapy, and for the most part, these medicines are effective.

A relatively small number, however, still progress to AIDS. Then there is another group of kids who have never been given antiretroviral drugs due to public health policies and limited resources in the past, yet they will never get sick. They are resistant to the damaging effects of the virus.

“One of the most common and effective mutations that confers HIV resistance in Caucasians has already been looked at to a limited extent, in African populations, and that mutation has not been found. So we need to take a closer look and see if there are other possible mutations in the same gene that could lead to resistance in some cases.”

Professor Gabriel Anabwani, principal investigator of CAfGEN and executive director of the Botswana Baylor Children’s Clinical Centre of Excellence explained the value of put- ting the research capabilities in the hands of African researchers.

“Most of the previous genetic studies in HIV, and in fact most genome- wide association studies in general, have been undertaken in non-African, adult populations,” he said. “CAfGEN will address these disparities in genomic research. Indeed, there is a great need to study the genetic factors of disease progression in children because their disease differs considerably from their adult counterparts and they potentially have more to gain from therapeutic advances.”

Tuberculosis (TB) is another concern, second only to HIV/AIDS in terms of its deadly toll on populations, accord- ing to the World Health Organization. The death rate for TB has declined significantly over the past decade, but it remains a leading cause of death for individuals with HIV.

In conjunction with Makerere University in Uganda and the University of Botswana, Baylor College of Medicine will train as many as eight Ph.D. students in their Houston labs over the next three years to form the foundation for the home universities’ own genetics and genomics departments and laboratories. Makerere University Ph.D. student, Savannah Mwesigwa, will be among the first African students to attend Baylor for training under the CAfGEN program.

“Previous research in Africa has been hugely reliant on foreign institu- tions, which can be attributed to a lack of the essential facilities and technical expertise,” said Mwesigwa. “CAfGEN will play a significant role in developing the vital infrastructure, and through the training program at Baylor College of Medicine, increase the necessary expertise in genomics and genetics. The participation of different institutions will reinforce collaborative ties between researchers in both the U.S. and Africa.

“The results from the CAfGEN projects will help answer important questions about HIV/AIDS and Tuberculosis progression especially in African pediatric populations, an underrepresented, but significant cohort,” he added. “Such information will be instrumental in developing new therapeutic and prophylactic strategies to control the diseases.”

Following his time at Baylor, where he hopes to learn about next generation sequencing, bioinformatics and biostatistics, Mwesigwa will return to Uganda and help train the next generation of genomics researchers in Africa. CAfGEN will also be arranging for the universities to house sequencing machines. The goal is a self-sustaining research and training program that will ultimately reach beyond Botswana and Uganda.

“Our role, as one of the Collaborative Centers of H3Africa, is to train African researchers in genomics research, and build the infrastructure. We will be basically providing next generation sequencing machines, and the equipment to do genomics and genetics research,” said Mardon. “When that training has become self-sufficient and our colleagues in Africa have the infrastructure to do the work, then they can do genomics research on their own people independently. They will also be trained in grant writing, so they can secure their own genomic research funding. The broader goal is to create a sustainable genomics network on the continent, so that collaborative scientific relationships will develop in Africa and with the rest of the world.”

Additionally, the CAfGEN team will be helping address social and ethical implications of genomics research in the region, explained Edward Pettitt, senior project coordinator with Baylor International Pediatric AIDS Initiative and co-investigator with the COE.

“It is imperative that a research endeavor such as CAfGEN address the complex ethical, legal, and societal implications of genomics research with a pediatric African population. Such issues center around respecting and protecting the interests of the research participants, communities, and researchers involved in the project, as well as effectively engaging with gatekeepers of the communities involved,” he said. “To this end, we hope to conduct an extensive desk review of salient ethical and legal issues related to pediatric genomic research in Africa as well as form local community advisory boards in Botswana and Uganda— consisting of representatives from child welfare, human rights, religious, and ethical bodies—to facilitate communication between the research team and the community.

“The community advisory boards will provide insights into the language, culture, and other context-specific factors that could affect the research process, and will provide a mechanism for the researchers to negotiate and address any challenges that may arise during the study with the relevant communities,” he added. “We also hope to educate the general public in Botswana and Uganda on the value of genomic research and the links between human health and heredity.”