The Museum of Fine Arts, Houston 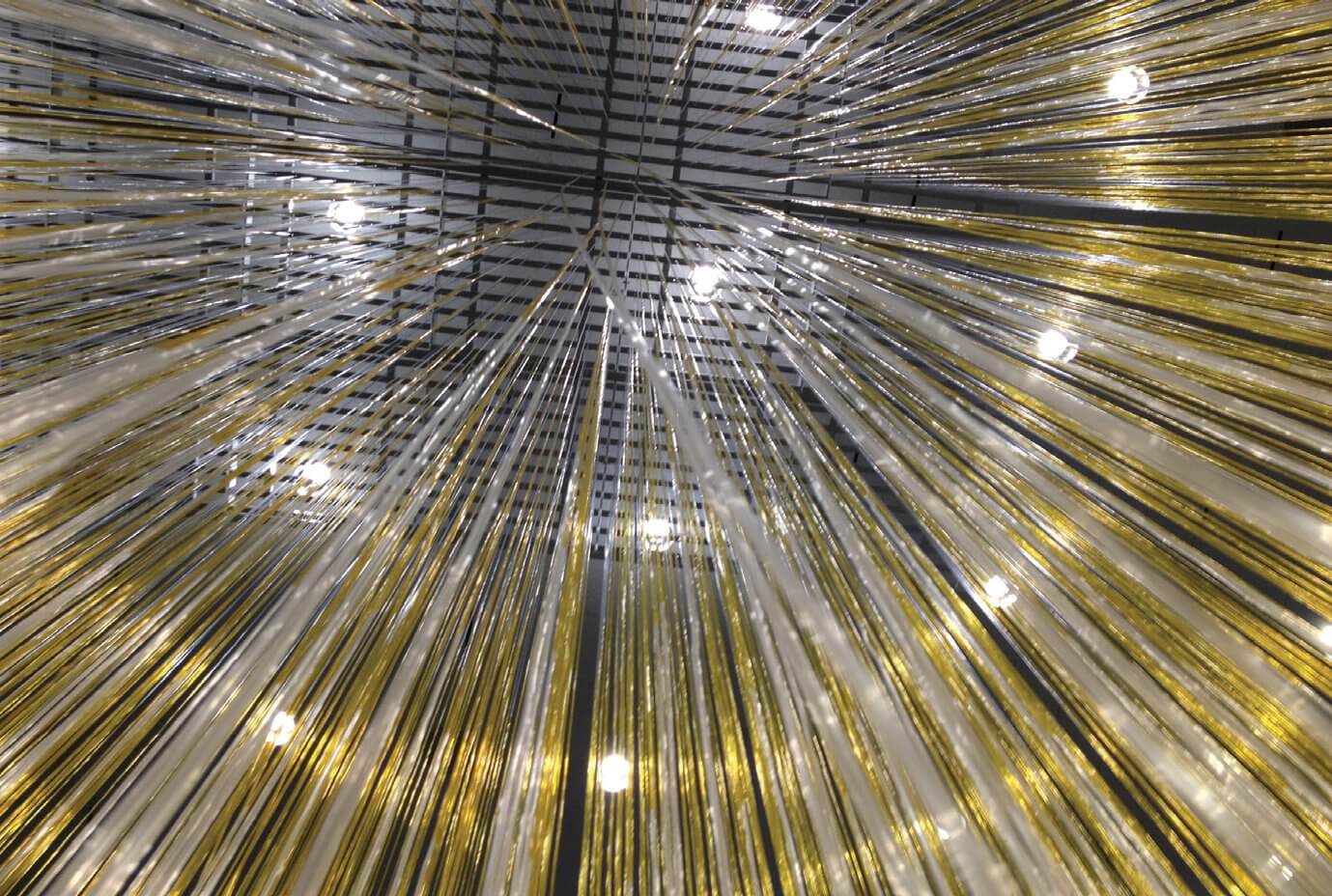 Thousands of feet of tubing, like the kind you see in the Texas Medical Center, will make an artistic debut in Houston this summer at the Museum of Fine Arts, Houston. Soto: The Houston Penetrable, a site-specific installation by Venezuelan artist Jesús Rafael Soto, takes advantage of the durable material used every day in patient care for a dynamic display that is completed only by the viewer’s experience.

The Houston Penetrable is a vast, floating sea of strands suspended from the ceiling of the Museum’s Cullinan Hall, designed by Ludwig Mies van der Rohe in 1958. The 24,000 polyvinyl chloride (PVC) tubes hang 28 feet from ceiling to floor and encompass nearly 2,600 square feet. At rest, the hand-painted strands compose a three-dimensional golden orb on a transparent background, but the real magic comes in participation. Intended to be touched, handled and waded through, the Houston Penetrable attempts to transform the way viewers think of and experience the surrounding space. Visitors are also encouraged to take photos in the Penetrable to post on social media with the hashtag #sotosummer.

“When I came to the Museum, one of my ambitions was to provide programming of contemporary art that was truly participatory, which only happened when the visitor completed the work of art, and that’s the case with Soto,” said Gary Tinterow, director of the Museum of Fine Arts, Houston. “I know that our audience is going to truly enjoy running through the piece, holding onto the strands, perceiving that enormous elliptical orb glowing in space.”

“Jesús Rafael Soto stands out as a pioneer of 20th-century avant-garde in Europe and Latin America, and his Penetrables are his signature works,” said Mari Carmen Ramírez, MFAH curator and organizer of the project. “The Houston Penetrable brings Soto’s playground indoors, with a fully sensorial experience of light and color.”

Born in Ciudad Bolívar, Venezuela, Soto (1923–2005) was a landmark figure in Latin American art. Formally trained as a painter at the Escuela de Bellas Artes de Caracas in the 1940s, Soto relocated to Paris in 1950. There, he quickly became integrated into a community of international artists interested in geometric abstraction. Early on, Soto experimented with the visualization of movement, using dots, lines, planes and chromatic vibrations to transform the visual object into a fully mechanical body that appeared to move before the viewers’ eyes.

In the late 1950s, Soto brought his exploration of kinetic vibrations into three-dimensional space. His works eventually became architectural in scale, and Soto displayed his first Penetrable in 1967 at the Galerie Denise René in Paris. The resulting series, which he initially spoke of as “enveloping works,” embodies the synthesis of the artist’s investigations into light, movement and space.

In the 50 intervening years, these iconic, immersive Penetrables have been sited around the world, from the Museo Soto in Ciudad Bolívar (1973), to the rotunda of the Guggenheim Museum in New York (1974), to MALBA Fundación Costantini in Buenos Aires (2003). The Museum of Fine Arts, Houston, displayed Penetrable amarillo (Yellow Penetrable) (1973/95) outdoors from 2004 to 2006 as part of the exhibition Inverted Utopias: Avant-Garde Art in Latin America, and that piece then traveled to the Los Angeles County Museum of Art (LACMA) (2011). At once optical, tactile and kinetic, Soto’s Penetrables have come to define the fully immersive art experience for generations of participants.

Although Soto created some 25 to 30 different Penetrables over the course of his career, the Houston Penetrable designed by the artist on commission from the Museum of Fine Arts, Houston, in 2004 is one of very few site-specific Penetrables in the series, and the only one intended for permanent or semipermanent interior display. And although his other works are solid and monochromatic, typically made from yellow or blue tubing, the Houston Penetrable presents two colors and the effect of a hovering, three-dimensional ellipse.

Unprecedented in its size and its complexity, the Houston Penetrable was Soto’s final project and his most ambitious work of all. It has taken almost a decade to produce. The Museum worked closely with the Atelier Soto, along with Paris-based architect Paolo Carrozzino and producer Walter Pellevoisin, who oversaw a team of artisans and ironworkers in the French village of Vielle-Tursan and Houston to bring this monumental work to life. The ceiling of the Museum’s Cullinan Hall had to be reinforced with steel in preparation for the installation of 240 individual panels, each strung with 100 two-story-tall strands of PVC tubing. Houston companies Balfour Beatty Construction, Berger Iron Works, Bury CHPA, Cardno Haynes Whaley, Warehouse Associates

Development and Kendall/Heaton Associates were also instrumental in the realization of this great marvel of contemporary art.

Soto: The Houston Penetrable opens May 8, and will remain on view at the Museum of Fine Arts, Houston, through September 1, 2014. It is accompanied by an exhibition of eight exemplary pieces from the various phases and series of Soto’s career. This installation is organized by the Museum of Fine Arts, Houston, in collaboration with the Atelier Soto, Paris. The presenting sponsor is Mercantil Commercebank.