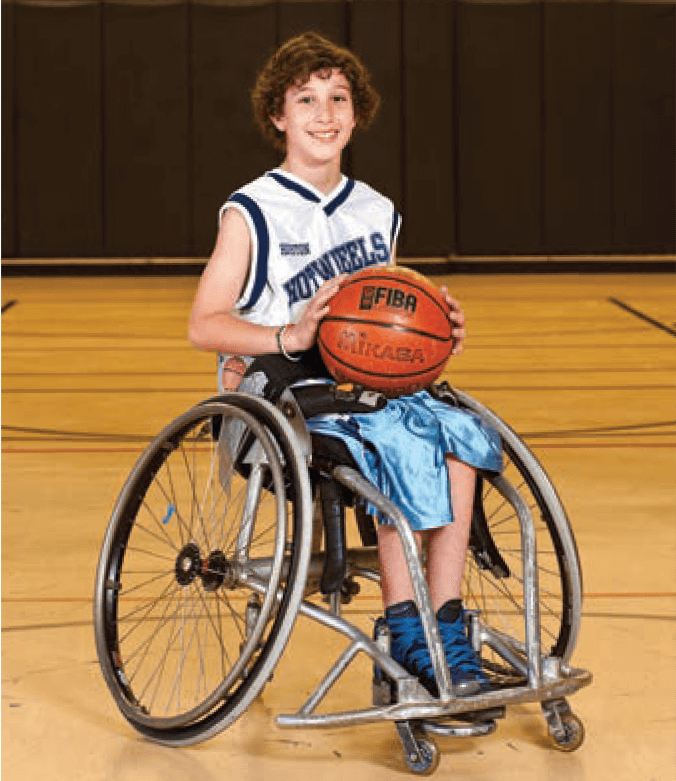 Adversity in the form of debilitating illness and injury can act as a barrier, presenting obstacles in every facet of life, from something as simple as brushing your teeth in the morning to the ability to engage in competitive sports. Peter and Aaron Berry, 11 and 10, respectively, have consistently broken through those barriers since becoming paralyzed from the waist down in an automobile accident in 2011. Juggling a busy schedule that includes schoolwork, spending time with family and friends, swim therapy and wheelchair basketball, the boys haven’t allowed their disability to slow them down; for them, obstacles have become opportunities.

“They’re very passionate about basketball. The coaching is incredible… it just epitomizes this all encompassing approach to providing support,” said Simone Berry, the boys’ aunt and guardian. “Before the accident, the boys were very competitive in their sports, and this has allowed that competitive energy and spirit to carry on. They learn life lessons in the experience with wheelchair basketball and through traveling across the country—they’re so close with their teammates.”

Founded in 1997, TIRR Memorial Hermann (The Institute for Rehabilitation and Research) Hotwheels is a competitive traveling junior wheelchair basketball team, comprised of elementary, middle and high school students age eight to 18. In 2013, the team achieved the highly coveted number one ranking in the National Wheelchair Basketball Association (NWBA) Junior Division. As one component of the adaptive sports program at TIRR Memorial Hermann, Hotwheels serves as a testament to the potential of holistic rehabilitation to give individuals their lives back.

Continually recognized as one of America’s Best Hospitals by U.S. News and World Report, TIRR Memorial Hermann is a national leader in medical rehabilitation and research. Emphasizing their dedication in education, they also act as a teaching hospital for Baylor College of Medicine and The University of Texas Medical School at Houston. Treating patients both within the Texas Medical Center and beyond, TIRR Memorial Hermann’s integrated network of rehabilitation facilities enables them to serve the entire greater Houston community.

“When you look at what we do, it’s clear that we’re a leader not only in patient care, but in contributing to new technology and research, in terms of the productivity and dedication of our staff, and in our efforts at preparing rehabilitation professionals for the future, across all disciplines,” said Carl Josehart, chief executive officer of TIRR Memorial Hermann “I really do believe that we are creating the standards that other people are following in the industry.”

With the renovation of the 42,600 square foot building behind the main hospital, all of the research endeavors came together under one roof. TIRR Memorial Hermann patients are able to see their physician and continue across the sky bridge to participate in research. Josehart describes the bridge that connects the hospital to the research building as more than a physical connection. “It’s a symbolic connection of how we want to do the research. Our research is really translational based on things we think can help our patients and make our rehab efforts more effective. It’s a visible reminder of the transfer of knowledge from the lab to the bedside and back to the lab for further refinement.” Expanding upon that translation, TIRR Memorial Hermann is currently growing their robotics and adaptive technology programs.

“There’s also this incredible sense of creativity and ingenuity in our staff here,” added Josehart. “Just because there isn’t a preexisting product out there, that doesn’t slow anybody down here. I find people making things all the time—give them a roll of duct tape and a broom handle and they’ll invent it. They have an incredible desire to continue to push the envelope.”

Amber Armstead, an occupational therapist at TIRR Memorial Hermann Outpatient Rehabilitation at the Kirby Glen Center who specializes in adaptive equipment and technology as well as spinal cord injury, was involved in the Berry boys’ rehabilitation. “With spinal cord patients, sometimes they’ll be defeated initially because they’re still grieving for their loss,” she reflected. “But by the time that they leave here, they realize that they can do literally everything else in their life, except walk, and that’s huge. If the technology ever catches up to them, they’ll be able to walk, too.”

Espousing a philosophy that focuses on the entire person, rather than just the physical recovery itself, Josehart is convinced that rehabilitation should be involved in breaking down barriers, and preventing a disability from interfering with quality of life. “Rehabilitation at TIRR Memorial Hermann focuses on the whole community—we don’t consider it a success until patients are re-engaged into any part of life that gives meaning to them,” he said. “Whether that’s going to school, or back to work, or being involved in sports, arts or their faith community, we want them to be able to embrace everything.” In conjunction with organizations across Houston, programs at TIRR Memorial Hermann involve everything from a partnership with United Airlines that teaches patients how to feel comfortable navigating through the airport, to a relationship with a restaurant in the medical center that helps individuals feel comfortable at a fine dining establishment.

Regaining some semblance of normalcy after a debilitating illness or injury is no easy task. For Peter and Aaron, that uphill battle was compounded by the tragedy that upended their lives three years ago, when their family vehicle was struck head-on while returning from a summer vacation in Colorado. Josh and Robin Berry, the children’s parents and pillars in Houston’s Jewish community, were killed, while Peter and Aaron were left paralyzed from the waist down after sustaining serious spinal cord injuries. Their younger sister, Willa, suffered broken bones that have since healed.

After receiving initial treatment at Covenant Health System’s Women’s and Children’s Hospital in Lubbock, the boys were transferred to Children’s Memorial Hermann Hospital where they were under the care of the pediatric trauma team for several weeks. Following one last transfer to Shriners Hospitals for Children in Chicago, the boys finally settled into a new routine of rehabilitation and recovery at TIRR Memorial Hermann Outpatient Rehabilitation. Embedding a holistic approach towards recovery into their rehabilitation process that encompasses everything from Hotwheels to physical and occupational therapy, TIRR Memorial Hermann provided a foundation of support that has helped the Berry boys to thrive three years after the accident.

“The continued presence in their lives, from TIRR Memorial Hermann, has had such a profound impact,” said Simone Berry. “They’re doing really well—they’re doing great. They’re living normal lives and participating in the same activities as any other children in their age group. I truly believe that these children embrace life.” She has been integral in forming a solid family unit in the wake of their tragedy, helping the children continue to make great strides.

“I admire the Berrys so much, not only for their courage, but for the strength required to share their story with the public,” Josehart said. “Through their ability to do that, they can provide hope for families who are facing similar situations. These stories happen every single day, 365 days a year. One of our patients’ biggest fears is that others will give up or stop trying. At a juncture when many families feel that they might want to be private, something that we can all respect, the act of sharing their story was truly inspirational.”