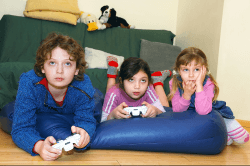 HOUSTON – (August 22, 2014) – Preadolescent youth who play violent video games for a significant amount of time each day are at greater risk for depression, according to research from The University of Texas Health Science Center at Houston (UTHealth) released Monday in Cyberpsychology, Behavior and Social Networking.

“Previous studies have observed how aggression relates to video games, but this is the first to examine the relationship between daily violent video game exposure and depression,” said Susan Tortolero, Ph.D., principal investigator and director of the Prevention Research Center at the UTHealth School of Public Health.

Depressive symptoms were described as a lack of pleasure, lack of interest in activities, concentration difficulties, low energy, low self-worth and suicidal ideation over the past year.

UTHealth researchers examined 5,147 fifth grade students in three major cities, including Houston, as part of a longitudinal study called Healthy Passages. In this racial and ethnically diverse group, students self-reported how often they played video games and how violent each video game was over a year long period.

“This association between violent video games and depression was consistent across all ethnic groups,” said Tortolero, who is also a professor in the Division of Health Promotion and Behavioral Sciences at the School of Public Health.

The study, titled “Daily violent video game playing and depression in preadolescent youth” received support from the Centers for Disease Control and Prevention. It is available online and will be in the journal’s print publication on September 10.