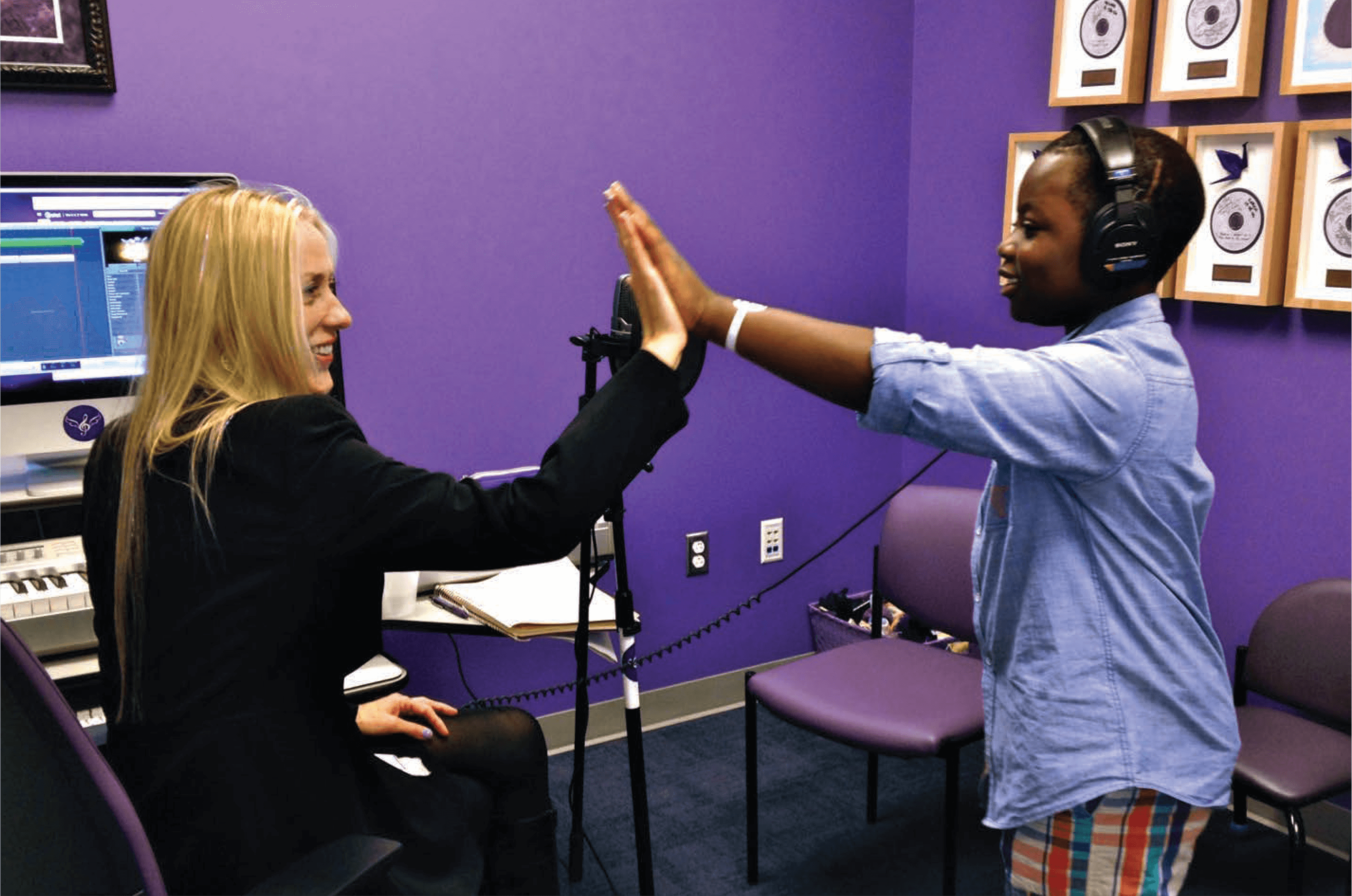 Walking into Anita Kruse’s cozy, personalized in-house recording studio at Texas Children’s Cancer and Hematology Centers, the understanding that you’re still inside of a pediatric hospital dissolves entirely. A vibrant shade of purple adorns the walls, apparent in the studio’s artwork and even on furniture, while a microphone, keyboard and recording equipment establish a tone of excitement and creativity. Purple Songs Can Fly (PSCF), a unique program that provides a musical outlet for children being treated for cancer and blood disorders at Texas Children’s Cancer and Hematology Centers, offers the potential to mentally transport patients through self-expression.

“I think of writing songs and creativity in general as a way for your spirit to rise above whatever else may be going on in your life,” reflected Kruse, a pianist and songwriter who founded Purple Songs Can Fly in 2006 after spending several years as a visiting artist in Texas Children’s Cancer and Hematology Centers Arts in Medicine Program. “Purple Songs represents that idea of rising above illness.”

In the program, children and their siblings work closely with Kruse and other professional composers to write, record, and burn songs to disc within short sessions. As the first in-house recording studio ever created on a pediatric cancer floor, Purple Songs Can Fly has inspired similar programs across the country and has been featured in numerous publications and broadcasts. In a recent partnership with the Houston Symphony, musicians are invited to visit the PSCF recording studio to provide musical accompaniment to the children’s songs.

“When a child has an opportunity to create something, they’re creating a legacy, whether it’s a piece of art or a song,” said Carol Herron, coordinator of the Arts in Medicine Program at Texas Children’s Cancer and Hematology Centers. “Through having their voices recorded, the children and their family have something tangible to go along with the memory of something wonderful, positive and creative. It acts as a reminder of this creative outlet that they had during a portion of their lives that was very difficult.”

In June of 2013, PSCF celebrated a significant milestone—their 500th song was written and recorded. A year earlier, they expanded their program to include a portable recording system that allows them to work at patients’ bedsides, both on the 9th floor of Texas Children’s Cancer Center inpatient unit and in their Bone Marrow Transplant (BMT) unit. While Kruse initially intended for the children’s hopes and dreams to fly through the creation of their unique records, she has found creative ways for their songs to literally soar.

Transcending symbolism, the songs created through PSCF have traveled on two different space shuttle missions with astronauts Scott Parazynski and Heidi Stefanyshyn-Piper. They have been carried on tour with The Rolling Stones, played under the ocean at the Aquarius NOAA Research Center, and taken to the top of Mount Everest. Although not as far reaching as their journey through space, the songs have also been played on Continental Airlines’ in-flight play lists and are currently available on United Airlines.

Even with an expansive scope of exposure that has taken them out of our atmosphere, Purple Songs Can Fly represents just one element of Texas Children’s Arts in Medicine Program. “We have so many wonderful community partners—we’re so fortunate to live in a community that’s so rich in the arts and supports the arts,” said Herron. “We want to provide as many points of exposure to as many types of art as possible for our patients, because you never know what’s going to connect for a child.”

Exposing children and teens to art in both inpatient and outpatient clinical settings, the Arts in Medicine Program has close to 15 partners they work with on an ongoing basis. A collaboration with the Museum of Fine Arts, based on a current museum exhibit, allows children in the Texas Children’s Bone Marrow Transplant unit to work with an artist from the museum at the bedside. Writers in the Schools (WITS) assigns one writer to work year-round to help patients cultivate the creative writing process. Afterwards, the Arts in Medicine program uses the children’s poems and short stories to put together The Splendid Review, a quarterly anthology of children’s writing that is sent to patients and their families. Diana Sanchez, a resident artist from City ArtWorks, assists patients with art projects such as printing, clay work, and self portraits, focusing primarily on children in the BMT unit. Earlier this year, costumed dancers from the Houston Ballet’s production of Aladdin made a special visit to Texas Children’s Cancer Center.

Kruse sees the union of health care and the arts as a way to retain that element of humanity that can often be lost through the treatment process. “For children who are facing life and death situations, it’s been fascinating to see how they’re so motivated about sharing profound messages—maybe they end up being their message to the world,” she said. “All of the arts have the ability to tap into the deepest parts of who we are— what could be more important? To see the evolution of that understanding throughout Texas Children’s is really amazing. I see it just becoming more of a mainstream idea, that healing and creativity are linked together on a deeper level that we’re just beginning to understand and even document, or study, scientifically. To see those ripples reverberating throughout the health community, as it is embraced as an important element in healing, is fantastic.”

“Our goal is to take them away, mentally, from being here, so you want that personal one-on-one connection with a child, whether it’s through photography, writing, or singing. You’re outside of the hospital for those few minutes,” added Herron. “Frequently, there’s a tendency to see children kind of one-dimensionally, just as patients. Through art, we learn more about them. Keeping the humanity in health care is so important; it’s about enriching their day, in that moment, which carries over into their treatment and throughout their lives.”