Original Magna Carta and Only Known Copy of King’s Writ United for First Time in U.S.

The Houston Museum of Natural Science

Original Magna Carta and Only Known Copy of King’s Writ United for First Time in U.S. 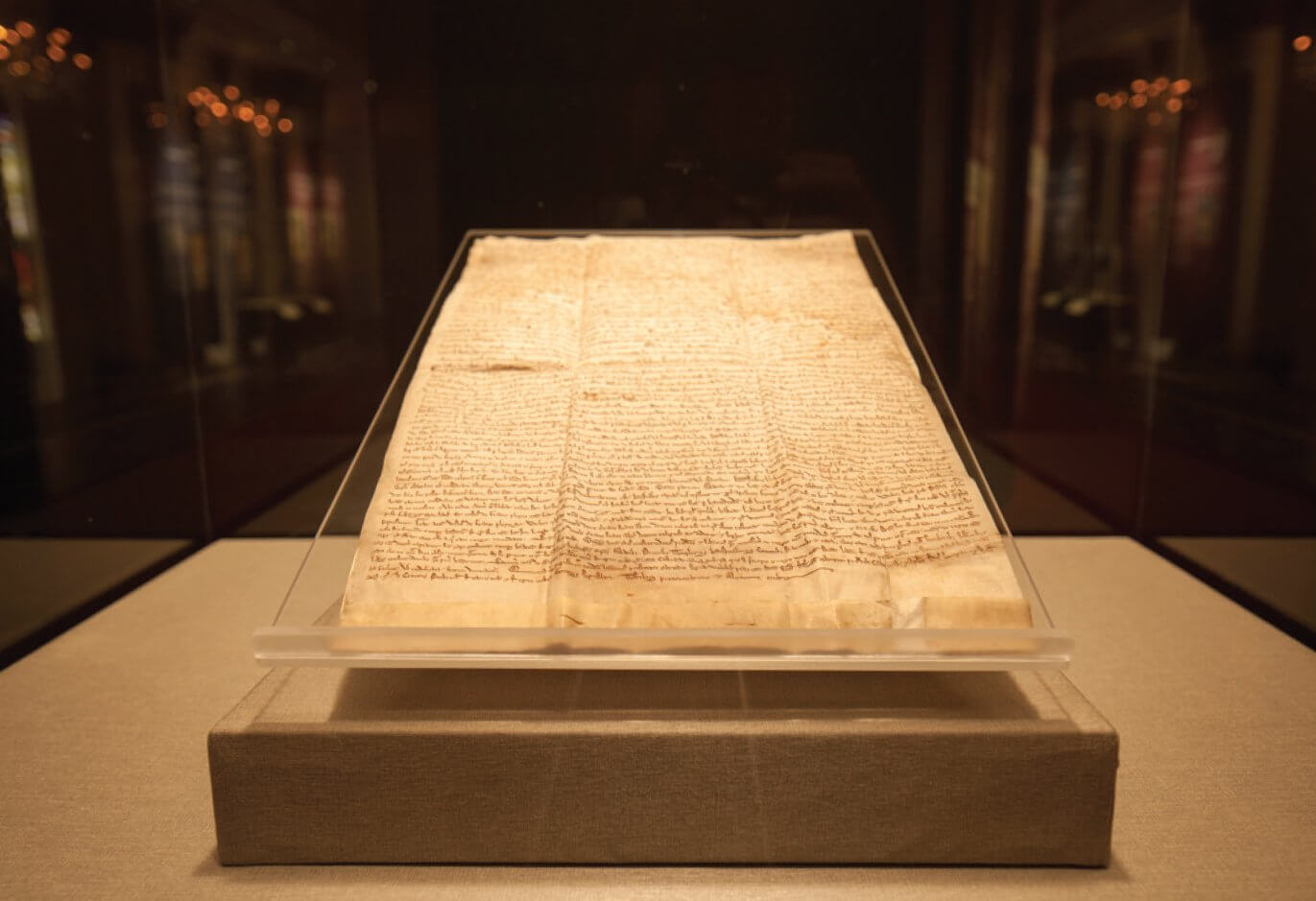 An original edition of the Magna Carta, along with the only known example of the King’s Writ, a letter from King John to the Sheriff of Gloucester dated June 20, 1215 A.D., announcing the signing of the Magna Carta, is currently on display at the Houston Museum of Natural Science (HMNS) from its home in Hereford Cathedral. The two documents are on display together on United States soil for the first time in their collective history.

The Magna Carta is considered to be Great Britain’s most valuable export to the world and a model upon which the United States Constitution— among many other important world documents—was based. The Magna Carta continues to serve as the definitive document modeling basic civil liberties and is the source of many of the most fundamental concepts of law, including the very concept of a written constitution. In more than one hundred decisions, the United States Supreme Court has traced dependence on the Magna Carta for an understanding of due process of law, trial by jury of one’s peers, the importance of a speedy and unbiased trial, and protection against excessive bail, fines or cruel and unusual punishment.

“We are honored to be the museum with which Hereford Cathedral has elected to share this precious document with Houstonians and many others in Texas and the U.S.,” said Joel Bartsch, president of the Houston Museum of Natural Science. “To be able to put on display and unite for the first time in the U.S. a copy of the Magna Carta and King’s Writ, two documents that helped shape many other landmark documents including our U.S. Constitution, is a momentous occasion for HMNS.”

This special, limited time exhibition, which runs from February 14th to August 17th, 2014, consists of two sections. The first section serves as an introduction to the Middle Ages, familiarizing visitors with various aspects of medieval life. Set against the backdrop of timelines and maps to situate when and where events occurred, patrons are treated to a visual and informational feast of different topics, ranging from hygiene (or lack thereof ) to textiles to writing, complete with samples of parchment and a scribe’s desk.

Two mannequins, one dressed as a poor peasant boy and one as the boy King III, invite class comparisons while an extensive weapons portion, allowing visitors to lift a carefully rigged life-size jousting spear or take a glimpse at traditional armor, sheds light on the realities of medieval warfare. A brief video introducing King John and the Magna Carta sets the historical framework for the second section of the exhibit.

“The interactive elements really appeal to the younger visitors, and the tactile elements help provide them with a point of engagement,” said Dirk Van Tuerenhout, Ph.D., curator of anthropology at the HMNS. “After all, we even have a life-size replica of a medieval toilet—what’s not to love about that?”

The Magna Carta’s history, as illustrated in the second part of the exhibit, is complex, part of the evolving relationship between the monarchy and leading nobles of England during the preceding century. Following earlier charters issued by Henry I and Henry II, and decades of increasing conflict and civil war, the rebel barons of England, along with the Archbishop of Canterbury, Stephen Langton, and a number of bishops, forced King John to establish peace through the issuing of a new charter, at Runnymede, near Windsor, on June 15, 1215. The charter safeguarded certain rights, privileges and liberties of the clergy and the nobles, while also placing some limits on the power of the crown.

“When we knew these documents were coming our way, right in time for the 800th anniversary of the Magna Carta in 2015, we realized the importance of placing them in a larger context,” explained Van Tuerenhout. “The second part of the exhibit sets up the chronology in a more refined manner.” A wall of text emblazoned across the end of the room discusses the legacy of Magna Carta, specifically as it relates to the American Constitution.

“On both sides of the Atlantic we have come to see Magna Carta as an iconic milestone on the long road of human liberties and justice,” said Canon Chris Pullin, Chancellor of Hereford Cathedral, who has overall management responsibility for the documents. “Many world leaders have been inspired by what it stands for, and we hope that this loan will strengthen the resolve of a new generation to safeguard the values of justice, peace and liberty.”