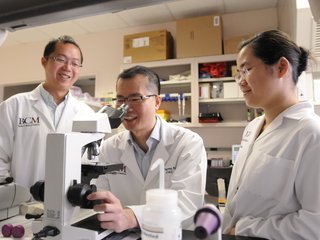 Binge eating, an eating disorder in which a person frequently consumes unusually large amounts of food in a short period of time, affects about 5 to 10 percent of U.S. adults and is more common in women than men. Researchers at the USDA/ARS Children’s Nutrition Research Center at Baylor College of Medicine and Texas Children’s Hospital found that the hormone estrogen can specifically trigger brain serotonin neurons to inhibit binge eating in female mice in a report today in the Journal of Clinical Investigation.

“Previous data has shown that women who have irregular menstrual cycles tend to be more likely to binge eat, suggesting that hormones in women play a significant role in the development or prevention of the behavior,” said Dr. Yong Xu, assistant professor of pediatrics and senior author of the paper. “Previous data has also shown that in humans, there is a strong association between estrogen and binge eating. When estrogen is high, binge eating is inhibited, but when estrogen is low, binge eating becomes more frequent. Using mouse models, we set out to see what the effects of estrogen were on binge behavior in female mice.”

In this study, Xu and colleagues first found that estrogen can strongly inhibit binge eating in mice, which was consistent with data in humans.

“We can speculate that in women who develop binge eating who also happen to have irregular menstrual cycles, it is probably because their estrogen function is somehow damaged, which is what leads to the development of binge eating,” said Xu.

Xu and colleagues went further to determine what receptor was mediating the estrogen effect on binge eating and where this receptor was located. Using genetic mouse models, they found that the estrogen receptor-α, expressed by serotonin neurons in the brain, mediates the effect of estrogen to suppress binge eating.

“The significance is not only understanding the mechanism of how estrogen may modulate this behavior, but from a more therapeutic point of view, this would identify a potential target for estrogen therapy or modified estrogen therapy for treatment of this problem,” said Xu.

However, Xu notes that the current estrogen therapy in practice has been a problem because it produces detrimental effects, such as high risk of breast cancer.

“We thought, if we can understand where and how the estrogen acts to produce some benefits, maybe that will facilitate the development of an estrogen-based therapy that could be more specific and would just produce the benefits and bypass the side effects, such as breast cancer,” he said.

Around this same time, Xu’s collaborators at Indiana University developed a compound called GLP-1-estrogen, which was a conjugate between the peptide GLP-1 and estrogen. The idea was that GLP-1 would be used to carry the estrogen and deliver it to a region where there are GLP-1 receptors as well as estrogen receptors and the estrogen would be released there, producing a biological function. His collaborators at Indiana University published that this compound was good for body weight control and would not increase the risk of breast cancer because the compound did not deliver estrogen to the breast tissue.

“There are a few studies showing that binge patients tend to have decreased GLP-1 in their blood, but nobody had shown that GLP-1 suppresses binge eating in animals or humans until now,” said Xu. “We showed that these two things, estrogen and GLP-1, work together to decrease binge eating and that GLP-1 can carry estrogen to this specific site to produce a benefit, but bypasses the breast tissue.”

Xu notes that this provides a strong case for an interventional drug that specifically acts on estrogen receptor-α in the serotonin region of the brain to treat binge eating.

The next steps in Xu’s research will be to determine the mechanism by which estrogen regulates serotonin neurons. He and colleagues also hope to go downstream of serotonin to see if increasing serotonin release inhibits binge eating.