The life flight legacy began in 1976, and continues still today with an emphasis on delivering the best possible care to the critically ill and injured 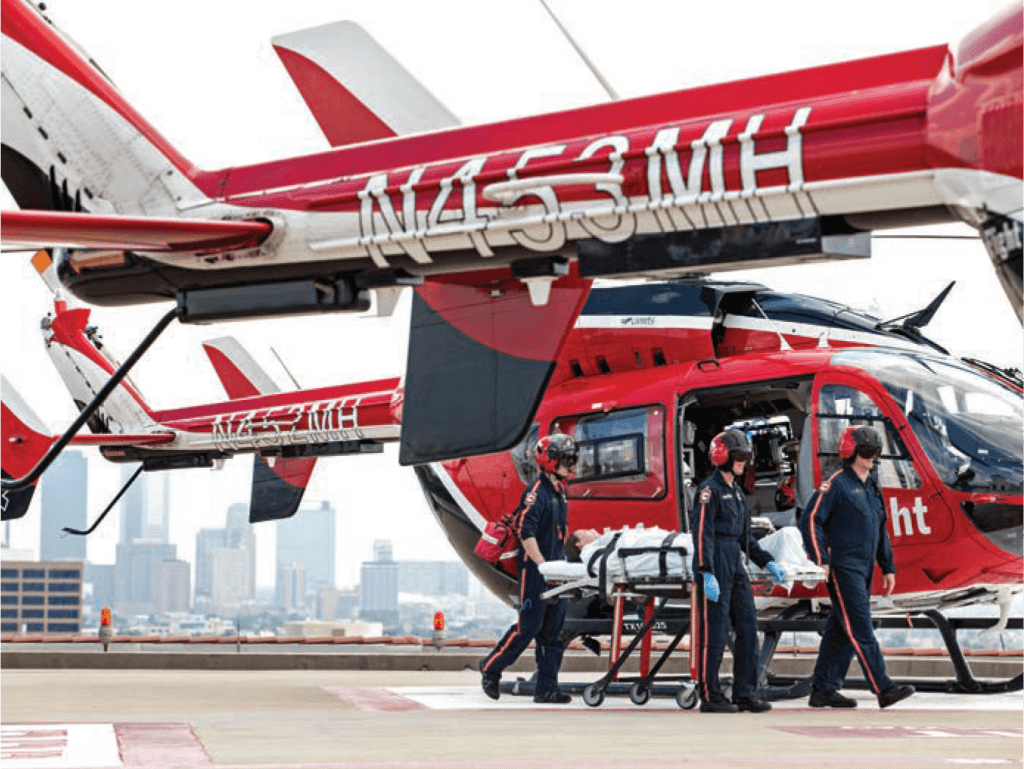 When the iconic red helicopters whir over the Texas Medical Center, they command attention. Their deliberate, methodical descent shows no sign of the stress of the scene that they just left.

On the ground and in the air, the highly trained pilots, paramedics and nurses of Memorial Hermann Life Flight,® a nationally renowned air ambulance program, are saving lives every day.

Their dedication is what Life Flight is all about, says James “Red” Duke Jr., M.D., founding director of the program. Duke, himself a trauma surgeon, knows what it takes to care for critically ill or injured patients. He has done it for over fifty years, including the fateful day that President John F. Kennedy was assassinated. Duke was one of the surgeons who fought to save Texas Governor John Connally’s life that day in 1963, and later went on to help establish the Memorial Hermann Texas Medical Center trauma program in 1972. The hospital’s air ambulance program would follow, four years later. Memorial Hermann-TMC is now home to the most active trauma program in the country.

“We began Life Flight on August 1, 1976. We made three flights that day and 45 the next month,” said Duke, who is also professor of surgery and the John B. Holmes Professor of Clinical Sciences at The University of Texas Health Science Center at Houston (UTHealth) Medical School. “It has been a real privilege to be involved in watching the incredible commitment from the Life Flight crews and everybody involved in making this program what it is.”

“I think that what makes our program great is the quality of work that is executed on a daily basis from each individual fulfilling their responsibilities,” he added. “They do it so well and with such dedication and commitment.

Our mechanics treat those helicopters like a baby. The pilots, paramedics and nurses are all real pros. They are all just a great group.”

Today, the Life Flight crews transport more than 3,000 patients a year, operating 24 hours a day, every day of the year. What began with a single Alouette helicopter has grown to include a fleet of six EC-145 twin-engine helicopters and a fixed-wing aircraft, operating on five bases across the Houston area, and serving communities within a 150-mile radius of the Texas Medical Center. In addition to landing at the scene of an accident or incident, Life Flight also helps transport critical patients from one hospital to another.

“Life Flight is really a regional asset,” said Texas Trauma Institute Medical Director, retired Col. John B. Holcomb, M.D. “Some people think we only transport patients to Memorial Hermann, but that is not the case. We take the patients to the closest location and the best place to go depending on the severity of illness both trauma and non-trauma for the patient’s benefit. We do what’s best for the patient.”

Each Life Flight helicopter is manned by a three-person crew that includes a pilot, flight nurse and paramedic. The pilots, many of whom have backgrounds as military pilots, are solely responsible for the safety of the aircraft.

They carefully monitor weather, environmental conditions, and maintenance of the equipment, and are given the final word on whether their crew can safely respond to a call.

A nurse and paramedic make up the medical team aboard each flight, working together to deliver the best possible care for their patients. All of the program’s medical personnel are licensed paramedics, while the flight nurses are also registered nurses. Beyond the flight crew, the Life Flight staff includes mechanics, dispatchers and administrators.

The team dynamic is as important as the training and skill, since each member of the crew plays an essential role in patient transportation and care. Memorial Hermann-TMC Chief Operating Officer Tom Flanagan knows firsthand the value of having a confident, capable crew. Flanagan previously served as a Life Flight nurse for 21 years.

“The crew functions as a trio. It is a team effort. They are so interdependent. Once they get in that aircraft, their lives are dependent upon each other,” said Flanagan. “All have to be on their game, all the time. The pilot, the nurse, the paramedic, dispatch, the mechanic. They are rescuing people that have endured severe trauma, or are suffering from severe medical issues. We are talking from premature babies, all the way through geriatrics.

“It’s a high stress, very highly visible role. You’ve got to be able to manage all of those emotions,” he said. “And with that understanding, they become very close in their professional working relationship because of what they endure every day.”

For the case of a traumatic accident or injury, the Life Flight crew also relies on first responders to make a lot of the preliminary decisions in patient care. Once the first responders determine that an air ambulance is needed to quickly transport a patient to the hospital, they place a call to the dispatch center, which then determines the closest available crew to respond.

Memorial Hermann works closely with EMS from all over the greater Houston area, police officers and firefighters to ensure that the ground crew at a scene is prepared to relay critical information to the aircrew, and is familiar with how to secure a safe landing zone at the scene of an accident or incident.

“We would not have seen the success that we have had for 38 years if it hadn’t been for the EMS and law enforcement in the community, because it really starts with them,” said Flanagan. “They are the first responders, and so they have to make some critical decisions in a pretty short period of time. Does the patient need to go to a Level 1 trauma center? How close is the closest Level 1? How critical is the patient? How quickly do we need to get them there? Hence, do we need to utilize the helicopter? So we have always had to work very closely with EMS and law enforcement.”

The goal for all is to get trauma patients back to a trauma center within an hour of their initial injury. This golden hour is believed to be the amount of time within which a patient should receive care in order to have the greatest chance of survival.

Beyond allowing the crew to bypass Houston traffic to get patients to the hospital in a fraction of the time it would take for ground transport, each helicopter is fully equipped to give the medical team the tools to provide lifesaving care. “We have added a number of capabilities to the aircraft in order to better care for our patients by doing some of these procedures in the air, on the aircraft, on the route back to the level one trauma center,” said Flanagan. “

Holcomb, vice chair, professor and chief of UTHealth’s Division of Acute Care Surgery, served as a top military trauma surgeon for the U.S. Army. Since joining the Texas Trauma Institute, he has helped add blood products into the Life Flight helicopters, allowing trauma patients experiencing significant blood loss to be given transfusions en route to the hospital. Holcomb is just one of many veterans serving on the Memorial Hermann team, and sees the opportunity for battlefield trauma care and training to translate into better care for the city’s trauma patients.

“We really try to take the lessons learned over the last decade from being in Iraq, Afghanistan, and implement those on the trauma side. That’s a big part of what Life Flight does,” explained Holcomb. “With tourniquets, blood products, hemostatic dressings, warming of fluids on the helicopter…we’ve spent a lot of time taking those lessons learned overseas and trying to benefit the trauma patient population in the greater Houston area.”

In order to provide the greatest benefit to the community, Life Flight’s services are available as needed, often at the hospital’s own expense. Since no patients are denied lifesaving transportation based on their ability to pay, Memorial Hermann has a number of community outreach programs designed to help avoid the need for trauma care. Bicycle helmet, water safety and new driver programs are designed to help inform the public about how to avoid the more common types of critical injuries that the trauma team sees each year.

A high school outreach program, called Shattered Dreams, gives students a realistic look at the consequences of driving under the influence. The students spend the night in the hospital, view a transport by air ambulance and hearse, and are ultimately asked to promise their families that they will never drive while intoxicated. As much as Memorial Hermann-TMC hopes that these preventative measures help decrease the number of trauma calls they receive, they will always be standing by, ready to transport patients back to the medical center.

“When Memorial Hermann made the commitment years ago to bring the helicopter into the community back in 1976, it truly was a commitment from the hospital and the board of trustees at that time that the program was for the community, to help the community,” said Flanagan. “Outreach programs are important, because although we are here to take care of those injuries, what we would really rather do is get out in front of the injuries and teach prevention. And that is really a commitment that Memorial Hermann-TMC took on in our philosophy as a trauma center.”