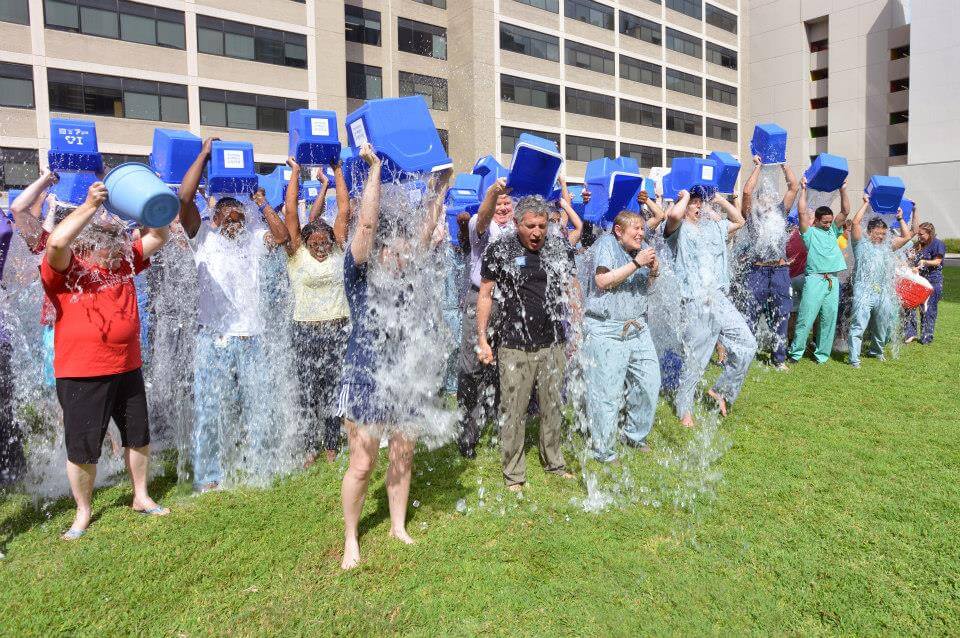 Dr. Paul Klotman, president, CEO and executive dean of Baylor College of Medicine, took part in the ALS Ice Bucket Challenge today, along with more than 200 other members of the Baylor community, including students, faculty and staff. He accepted the challenge by Mark Wallace, CEO of Texas Children’s Hospital, but took it one step further by inviting other Baylor folks to take part.

It was a team effort to show support and raise awareness and funds for those who live with ALS, amyotrophic lateral sclerosis. Second-year medical student Timothy Dunn and graduate school student Adrianne Stone helped spread the word and organize the event among students.

Dr. Yadollah Harati, professor of neurology and director of the ALS Clinic at Baylor, the only ALS Association Certified Center of Excellence in Houston, brought along his clinic team to take part in honor of the many people they treat and support daily. Members of the Office of Philanthropy and Alumni Relations were also on hand to help accept donations to not only the ALS Association but also the ALS program at Baylor.

ALS is a progressive neurodegenerative disease that affects the nerve cells in the brain and spinal cord, slowly limiting the ability of the brain to initiate and control muscle movement throughout the body. In later stages the body becomes completely immobile while cognition remains unaffected. It eventually leads to death. The illness is also known as “Lou Gehrig’s disease,” after the famed New York Yankee’s player who was diagnosed in 1939. There is no cure for ALS but there are treatments that slow the disease. There are current research projects at Baylor looking to determine which genes are responsible for the disease and eventually to find a cause and cure.