A Simple Gesture of Thanks for Fulfilling a Lifelong Dream

A Simple Gesture of Thanks for Fulfilling a Lifelong Dream 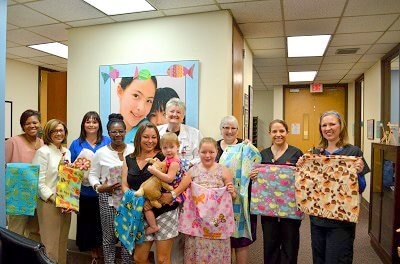 Annabella Grace Gartee celebrated her birthday Aug. 13. But instead of opening presents, the 2-year-old spent the morning giving gifts to others at the University of Texas Medical Branch.

Her story began in the neonatal intensive care unit at UTMB, where she was born prematurely, weighing less than 3 pounds.

Her mother Erica was so grateful for the care little Annabella received that she wanted to give back.

With the help of her mother Patricia Bolton-Legg, friends Cheryl Tessitore and Sabrina D’Olive, and Patricia and Cheryl’s granddaughters Harlyn Rose Smith and Addison Harper Reinholz (who was a preemie herself), Erica decided to sew 50 colorful blankets for the babies in the NICU. Annabella even gave her favorite pink monkey blanket to the cause.

Visiting with Dr. Joan Richardson and staff in the UTMB department of pediatrics, Erica explained why donating the blankets to the NICU was so important to her.

She and her husband Michael had been together for years when they decided they wanted children. It would be a long journey full of tears and disappointment for the League City couple, with unsuccessful fertility treatments and lots of tension, according to Erica.

After eight years of trying to get pregnant, she decided she was done. “I decided to give up on that dream and go back to school,” she said. But Erica would never quite make it to class.

One night in August two years ago, the couple had a heated discussion about her returning to school or whether to continue trying to have a baby. The very next day Michael called from work and asked her if she was ready for something life changing.

Confused, Erica cautiously said yes. Then he asked, “Are you ready to be a mommy?” Her immediate reaction was hurt. “I just thought he was being insensitive.”

But his question to her was sincere. While at work, Michael had learned about a baby in need of adoption and immediately called Erica.

“I screamed. I didn’t know what to do,” she said. Annabella had been born prematurely and was in the John Sealy Hospital NICU, receiving care. But Erica said yes.“I fell in love with her before I even saw her.”

Annabella Grace was born on a Monday. The Gartees would meet her on Wednesday. By the following week, they were officially a family. But it would be more than a month before Annabella would be strong enough to leave the hospital.

“We named her Annabella Grace,” she said, “in part for my mother’s middle name Ann, and Grace because she was given to us by the grace of God.”

Richardson was touched by the donation and said the staff will be so excited to see the kaleidoscope of colors in the NICU.

“This is what we love to see,” she said. “They may enter this big world as tiny babies, but we help them grow strong and go home. Annabella is a success story and I’m so proud of her.”